The Mauritshuis has acquired an engaging and high-quality painting by Pieter Lastman (1583-1633), Rembrandt’s most influential teacher.  St John the Baptist Preaching, painted in 1627, was purchased from an American owner by the Friends of the Mauritshuis Foundation with the support of a private donor.

Information from the Mauritshuis, 16 January 2019

Emilie Gordenker, Director Mauritshuis: ‘The timing of the acquisition of this painting by Lastman, at the beginning of a national Rembrandt Year, is ideal. We have been on the lookout for an outstanding example of Lastman’s work, due to the impact he had on the young Rembrandt. We are extremely grateful to everyone who made our wish come true, especially the private donor and the Friends of the Mauritshuis. 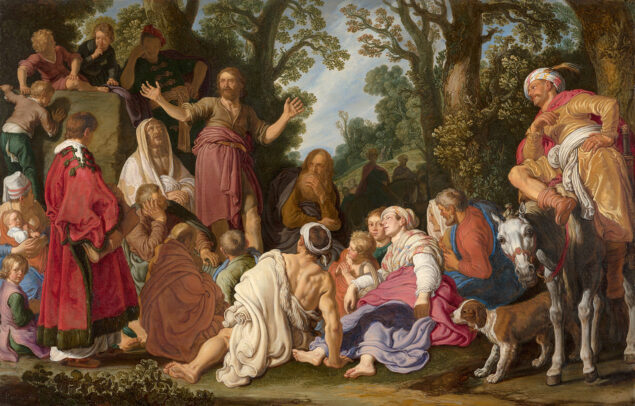 In his day the Amsterdam artist Pieter Lastman was one of the leading painters of history paintings (works that depict stories from the Bible, classical mythology and antiquity). History paintings were then considered the pinnacle of what a painter could achieve, and to acquire this skill Rembrandt became Pieter Lastman’s pupil in 1625-1626. Although Lastman who was Rembrandt’s teacher for only six months, had a great influence on his pupil’s development. This acquisition fills a gap in the Mauritshuis collection: although history paintings from the Dutch Golden Age are well represented, the same could not be said for the work of Lastman and the painters in his circle (the so-called pre-Rembrandtists).

St John the Baptist Preaching from 1627 is an excellent example of the history paintings that Lastman created during the period when Rembrandt was his pupil: a full composition, brightly lit, with a vivid colour palette. The composition was carefully built up, and entirely by the book – or to be more precise, according to Karel van Mander’s Schilder-Boeck of 1604. This publication explains how to put together a good composition – tricks that were child’s play for an experienced history painter like Lastman. As well as playing with composition, he also created depth in the scene by means of clever lighting: the crowd has gathered around John the Baptist, who is bathed in bright light, while many of the figures in his audience are in the shade. John the Baptist announcing the coming of Christ was a popular subject in painting.