A flower cartouche by the Antwerp artist Daniel Seghers (1590-1661) has been acquired by the Mauritshuis.  At the center of the composition is a portrait bust of the poet, diplomat and scholar Constantijn Huygens. The painting had been off the radar since 1828, but it recently resurfaced in a private collection. The new acquisition, which has been restored, is now on display in the museum. The painting was acquired with support from the BankGiro Loterij and Mr H.B. van der Ven.

This painting hung in the Huygenshuis – nearby the Mauritshuis on the Plein in The Hague – for many years, even until long after Huygens’ death, together with another donated work (Portrait of Stadholder-King William III (1650-1702) Surrounded by a Garland of Flowers). In 1828 the flower cartouche with the portrait of Huygens was bought at an auction by Jonkheer Johan Steengracht van Oostcapelle (1782-1846), the first director of the Mauritshuis, who acquired paintings for his own collection as well as for the museum. The location of the painting was unknown for much of the twentieth century. 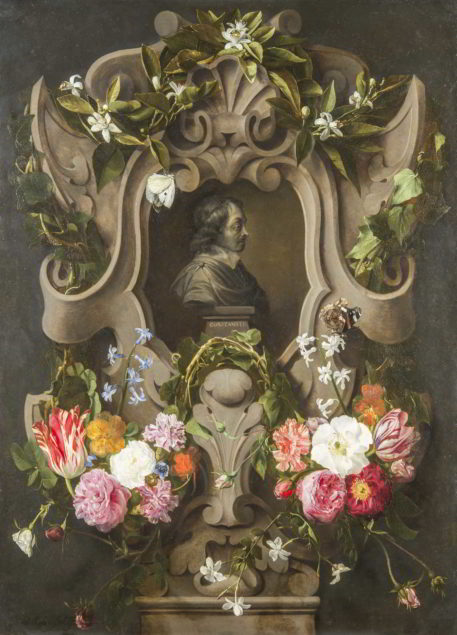 Daniël Seghers and Jan Cossiers, Bust of Constantijn Huygens Surrounded by a Garland of Flowers (1596-1687), 1644
Mauritshuis, The Hague

The Mauritshuis already owned two works by Seghers, including Portrait of Stadholder-King William III (1650-1702) Surrounded by a Garland of Flowers, one of the two flower cartouches donated to Huygens by the painter. The other work was considered lost until it recently resurfaced in a private collection. The Mauritshuis was able to identify the work by studying relevant documentation. The new acquisition was painted on a large and fragile copper plate. The painting was restored in the Mauritshuis’s conservation studio, where old layers of varnish were removed. The bright colours of the flowers have now been restored to their former glory. As was common for Seghers’s cartouches, the painted scene in the centre, in this case a grisaille, was executed by another Flemish artist. The portrait bust of Huygens was painted by the Antwerp painter, Jan Cossiers (1600-1671), which is confirmed by contemporary documentation.