Ary de Vois (1631/1633-1680), A Portrait of an Ensign of the Leiden Civic Guard, 1664
Museum De Lakenhal, Leiden. Purchased by Vriendenvereniging VBL with support of the Vereniging Rembrandt (thanks to their Vriendenloterij Aankoopfonds and a gift of The School of Life Amsterdam), 2022.

Museum De Lakenhal in Leiden has acquired a painting by the seventeenth-century painter Ary de Vois. The Leiden fijnschilder painted A Portrait of an Ensign of the Leiden Civic Guard in 1664 at the height of his career. 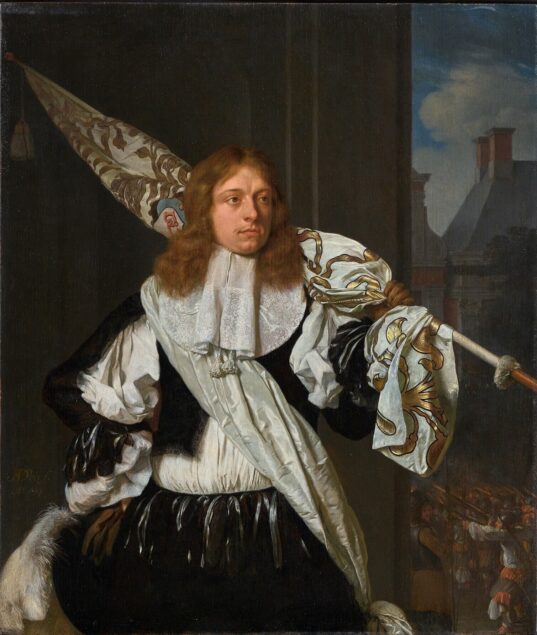 De Vois was probably born in Utrecht in the first half of the 1630s. He probably first trained in Utrecht with Nicolaus Knüpfer, who also taught Jan Steen, and then in Leiden with Abraham van den Tempel before joining the Leiden Guild of St. Luke in 1653. Work by the painter is rare in the Netherlands. Only very few works by De Vois can be seen in Dutch museums.

The identity of the sitter is unknown.  However, it is known that he was a member of the Leiden civic guard. One in eight adult men in Leiden was a member of this militia, established to protect the city’s population from outside threats and unrest in the city. They are often the most fashionable characters on militia paintings, and were therefore keenly favored by artists.

The manner in which De Vois painted the different fabrics on the intimate and small portrait is exceptional. He proves with this work that he is among the best of his contemporaries and a talented representative of the Leiden fijnschilders.