The National Gallery of Art has acquired A Fleet at Sea (ca. 1614), a major painting by the Haarlem artist Hendrick Cornelisz Vroom (1566-1640). The painting was included in the National Gallery’s 2018 exhibition Water, Wind, and Waves: Marine Paintings from the Dutch Golden Age. It was gifted to the museum by Albert Beveridge and his late wife, Madzy.

A Fleet at Sea portrays a historic event that took place many years before Vroom painted its likeness. A stiff breeze propels the billowing sails of a Dutch fluyt ship from the mouth of the Maas River onto the choppy waves of the North Sea. On the right side of the painting, the skyline of Den Briel, with its squat church tower, identifies the exact location of the scene. Vroom has also included several details that suggest that the heavily armed cargo ship in the foreground may be the Roode Leeuw (Red Lion), which left its home port of Rotterdam in 1597 for a well-documented voyage to the distant shores of South America and the Caribbean. The vessel’s figurehead is a bright red lion, and the flag of the province Holland (also with a red lion) appears atop the main mast. The inclusion of the municipal arms of Rotterdam on the red, white, and blue Dutch flag on the stern pole may be a nod to the Roode Leeuw’s home port. Research continues into a possible alternative identification of the ship as the Rotterdam-based Leeuwinne (Lioness), which rammed and destroyed Spanish galleys in 1602, an event that Vroom depicted in a 1617 painting. 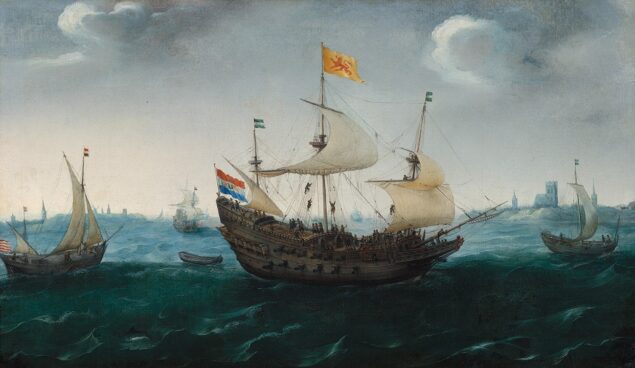 The first Dutch painter to specialize in seascapes and detailed portraits of specific ships, Vroom paved the way for later seventeenth-century marine painters with his lively, colorful, and harmonious compositions. Vroom’s extensive output in paintings and prints had a direct impact on the enormous popularity of marine painting in the Netherlands throughout the seventeenth century. His own sea voyages during the 1580s gave him a profound understanding of the architecture and rigging of ships, and of their interaction with wind and water in a wide range of conditions. Vroom’s career coincided with the dawn of Dutch global commercial expansion, and he received numerous lucrative commissions from shipowners, captains, and shareholders of the Dutch East and West India Companies.