The National Gallery of Art has acquired a newly discovered pen and ink drawing by genre and landscape artist Isaac (or Isack) van Ostade (1621–1649) entitled Workmen before an Inn (Village Street Scene) (recto) and Man with a Fiddle (verso) (ca. 1645). The first drawing by Van Ostade to enter the collection, it joins two paintings by the artist. A rare and important work, the highly finished and developed composition highlights Van Ostade’s artistic practice. 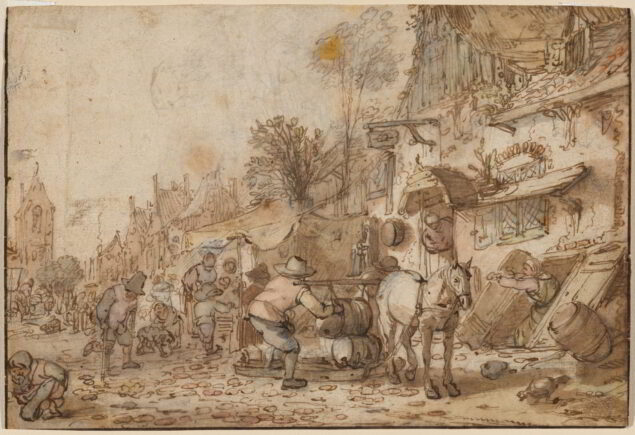 In Workmen before an Inn (Village Street Scene), Van Ostade used black chalk to establish the initial composition, which was then layered with multiple colored watercolor washes in brown, gray blue, pale yellows, and pinks. Demonstrating his skill as a draftsman, the scene was transformed from an expressive line drawing to a fully resolved image that portrays a lively Dutch village street. 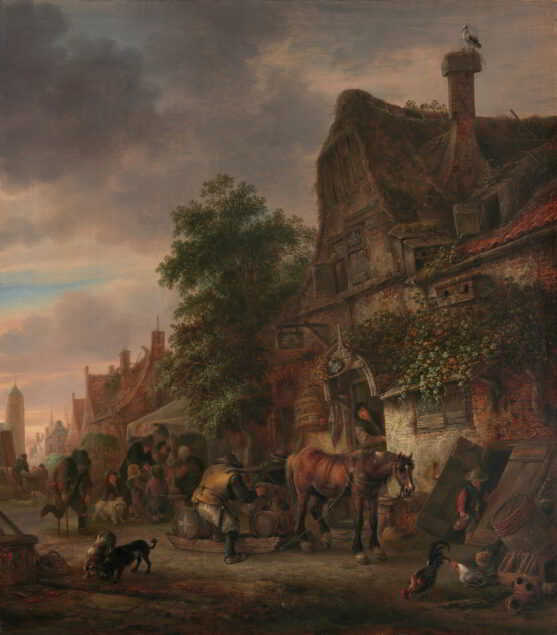 Considered a preparatory study for the National Gallery’s painting Workmen before an Inn (1645), it is only the sixth drawing that relates to a painted composition by Van Ostade. The painting and drawing, executed in the same year, share many compositional similarities, such as the horse and cart with a man hunched over barrels as well as villagers gathered under a covering in the shadow of distinctive Dutch architecture. One notable difference is the orientation of the image. The drawing is horizontal while the painting is vertical and portrays a more complete view of the inn and the atmospheric sky. On the verso, the pen and ink drawing entitled Man with a Fiddle was most likely by an assistant in Van Ostade’s workshop. 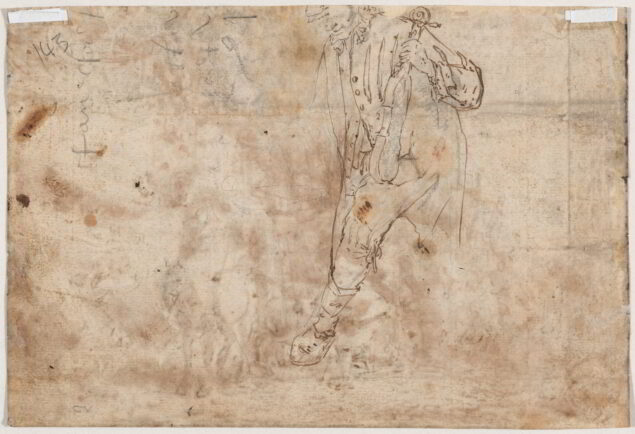 This drawing represents Van Ostade’s depictions of everyday scenes, a major departure from the style popular at the time. By depicting the lives of working people from a social realist perspective, Van Ostade captured a moment in time without the romance or jest traditionally seen in earlier compositions of peasant scenes. It provides further context for Van Ostade’s practice as well as the dynamic character of Dutch seventeenth-century art.