The Szépművészeti Múzeum (Museum of Fine Arts) in Budapest kindly informed us about the purchase of Adriaen Coorte’s Strawberries in a Wan-Li Bowl (signed and dated 1704). The museum was able to purchase the painting at auction in January 2022. CODART member Júlia Tátrai has written the following essay for us in which she presents the still life and discusses the deer motif that adorns the bowl.

The collection of seventeenth-century Dutch paintings at the Museum of Fine Arts, Budapest, housing more than five hundred works, is recognized for its exceptional diversity as well as for its several unique artworks. An example of these is one of the few paintings by Willem Buytewech, who worked mainly as a draughtsman and engraver: a composition depicting a Merry Company with most complex iconography. Another valuable piece of our collection is Bartholomeus van Bassen’s imaginary church interior made in 1620, in which the painter portrayed the tomb of William of Orange before its actual construction, based on Hendrick de Keyser’s plans. Moreover, the museum holds a vanitas still life by Jan van der Heyden, which is remarkable not only for the rare objects shown in the composition, but also for its place in the artist’s oeuvre as one of his last works. In his signature, Van der Heyden proudly recorded the fact that he produced this magnificent painting at the age of 75. Albert Cuyp’s large scale group portrait immortalizing the Sam family with the view of Bacharach in the background also plays a special role in our collection, just like Adriaen Coorte’s still life, which is the tiniest piece in his oeuvre. The work, painted on paper and dated 1702, measures only 10.9 x 15.6 cm, and depicts merely two walnuts on a stone ledge before a dark, homogenous background. The artwork was purchased by our museum from a Hungarian private individual in 1975, and was first published in the 1980s. It increasingly became a focus of attention after its restoration in The Hague in 2007, when it was subsequently presented at the exhibition Ode to Coorte in the Mauritshuis. Quentin Buvelot, the artist’s monographer discussed the painting and described its restoration treatment in detail.1 Lately, the painting has caught attention of other scholars, as well. In her study, also considering philosophical aspects, Hanneke Grootenboer writes the following about the Two Walnuts in Budapest: “I would like to suggest that Coorte’s highly unusual still lifes—which diverge from the Netherlandish still-life tradition with regard to their technique, size, subject matter, color palette, and general lack of theme—visualize the indefinable and the inexpressible so characteristic of sublimity more accurately than words have ever been able to articulate.” 2 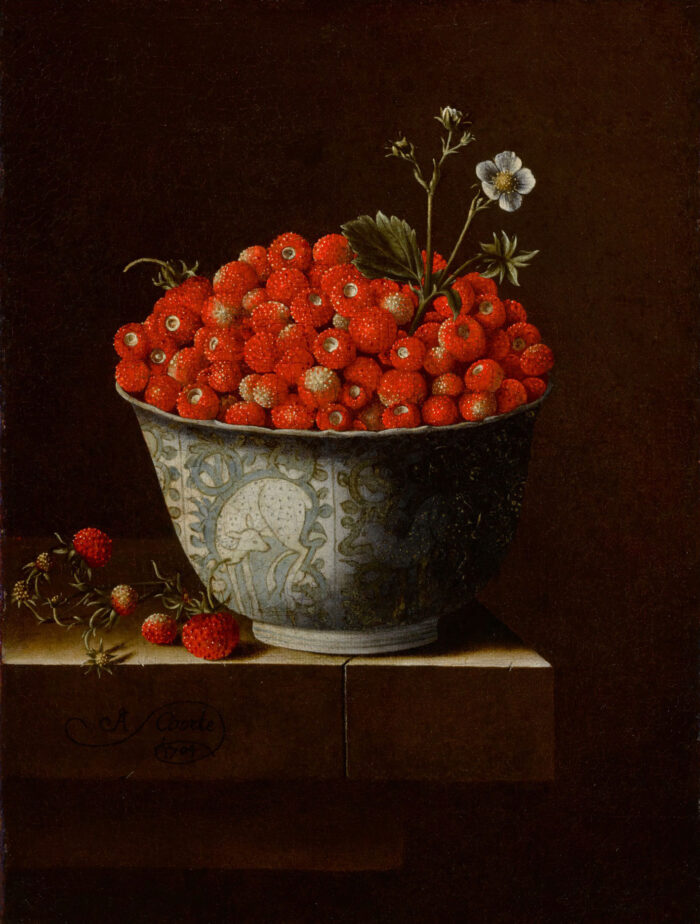 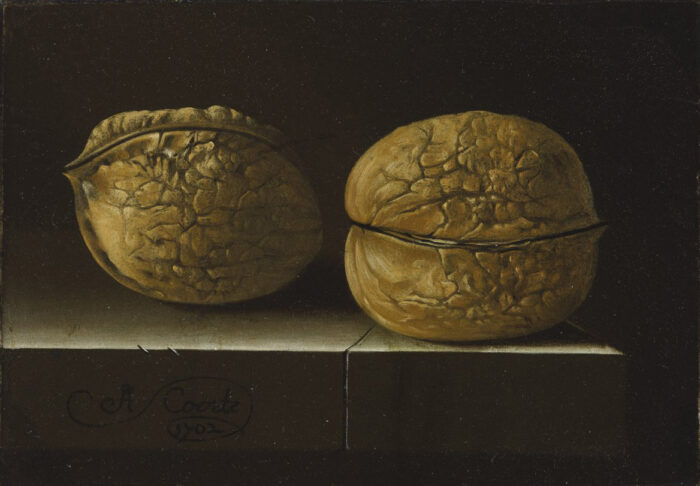 At a Sotheby’s auction in New York this January, our institution managed to acquire a further work by the artist, painted two years later, and representing wild strawberries in a Wan-Li bowl. The estimated value of the artwork before the auction was 1.5 million – 2 million USD, while its realized price came to be 2 million USD. 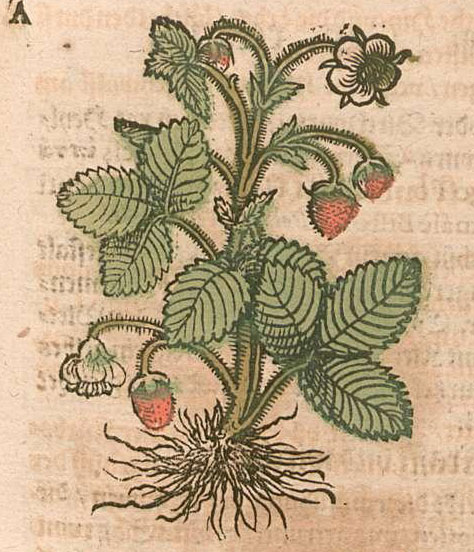 Even though the significance of Adriaen Coorte’s art was recognized by collectors and art historians not earlier than in the twentieth century. The first to call attention to a Coorte painting was the still life exhibition organized by the famous art dealer, Jacques Goudstikker in Amsterdam, in 1933. The work on view was rather similar to the recently purchased Budapest painting: it represented a Chinese bowl full of strawberries on a stone ledge, and was signed and dated 1704 in the artist’s characteristic calligraphic letters (County Museum of Art, Los Angeles, inv. M.2009.106.5). Apart from a few pictures of birds produced early in his career, Coorte’s whole oeuvre consists of still lifes with simplified compositions: his small paintings with dark backgrounds present only a couple of motifs, e.g. a few pieces or a bunch of fruit, a pile of asparagus, or one or two pieces of chestnuts, walnuts, and snail or sea shells. Of all, it is the wild strawberry (Fragaria vesca) that appears the most frequently in his works: sometimes simply piled up on the stone ledge, sometimes in glazed ceramics, while in three of his paintings they are depicted in elegant, blue-and-white porcelain bowls decorated with images of deers. The latter pictures are of almost identical dimensions (ca. 30 x 23 cm), were all executed in 1704, thus three years before the artist’s death, and their compositions show minimal differences. All three ensembles are lit from the left, and beside the Wan-Li bowls full of tiny berries a few pieces of the popular summer fruit can be seen lying around, as if fallen from the bowl. Amongst the above mentioned variants, the two closest to each other are the ones in Budapest and Los Angeles: in these the characteristic flower of the wild strawberry (five white petals on a long, thin stem) is shown bending to the right from the bowl. In the version held by the collection of the Ivor Foundation, New York, the flower bends to the left. The berry blossoming and bearing fruit at the same time was not only a beloved motif of paintings, but often appeared in herbal books with print illustrations from the sixteenth century onwards, as well. 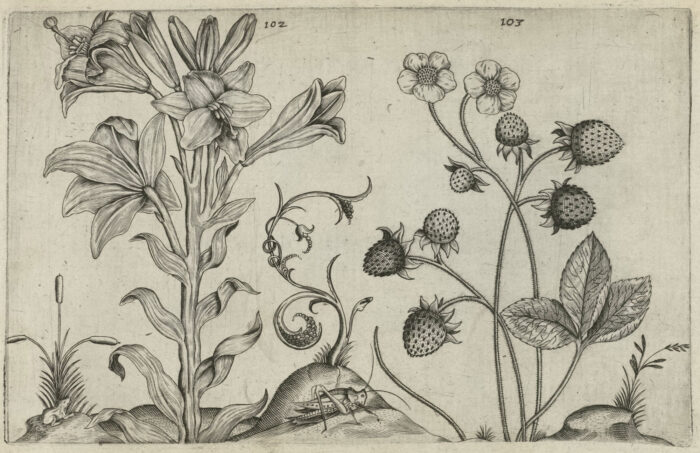 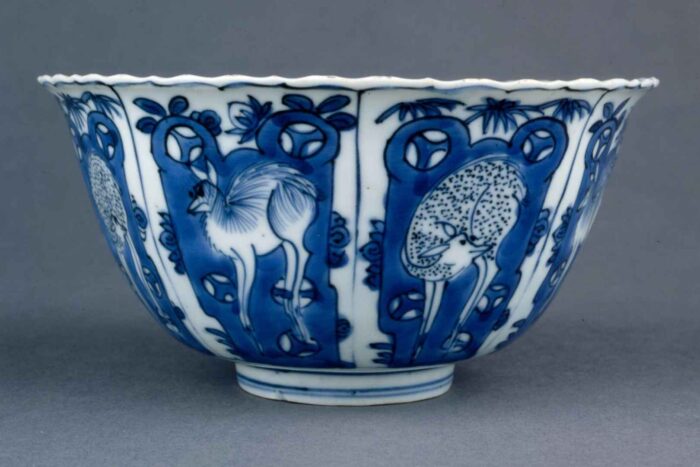 Contemporary thinking associated the fruit with the concept of the “kortstondig genoot”, that is, transient pleasure, which symbolic thought is not far from the allusions in Coorte’s still lifes. Similar references are made by the lavish China porcelain bowls: they warn the beholder about the transience of worldly riches. Chinese porcelain products reached, amongst other territories, the United Provinces as costly import goods, mostly on the ships of the East Indian Company. How fashionable blue-and-white Chinese porcelain bowls made under the Ming Dynasty, in the time of Emperor Wan-Li (1573-1620), were in Europe is well demonstrated by the fact that several pieces can still be found in both public and private collections today. For instance, the collection of the British Museum holds a vessel, the ornament of which very much resembles the motif decorating the bowl in Coorte’s paintings, and also has a similarly wavy rim.3 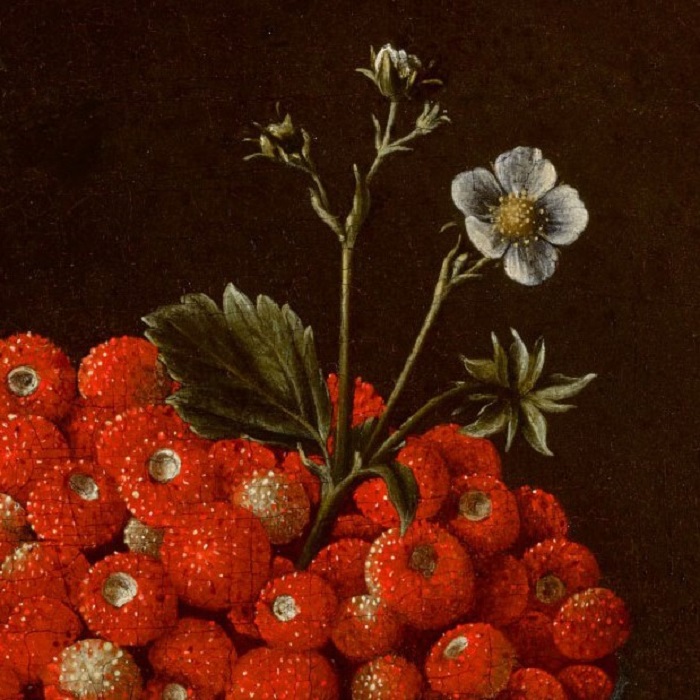 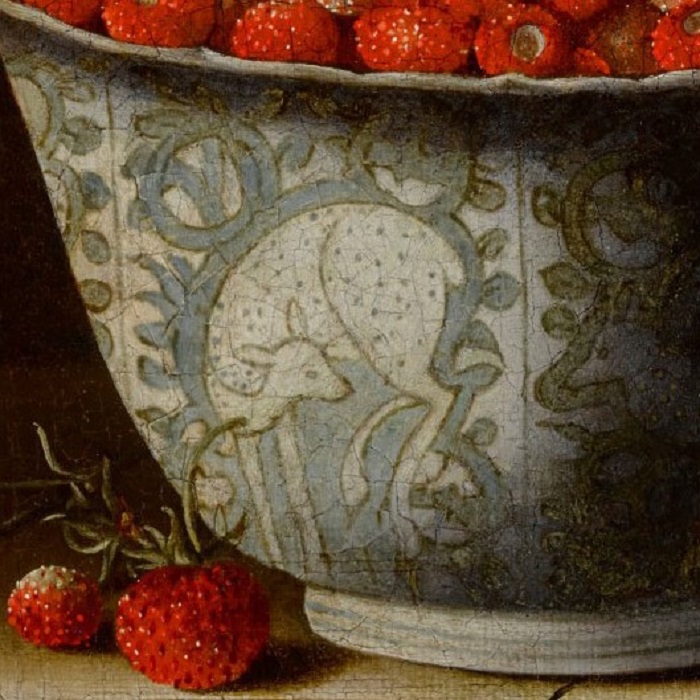 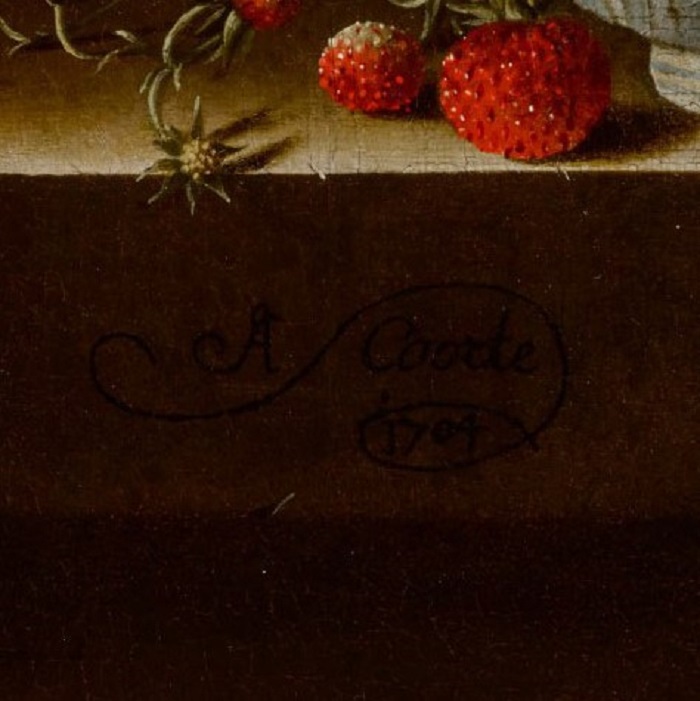 It is an intriguing question whether the painter was familiar with the original symbolism of the deer motif shown on the Wan-Li bowl. Chinese tradition associated this figure with long life rather than transience. In any case, hopefully we will be able to treasure Coorte’s timeless masterpieces, the Two Walnuts and the Strawberries in a Chinese Porcelain Bowl within the walls of the Museum of Fine Arts for a very long time.