The Metropolitan Museum of Art in New York has announced the acquisition of a painting by Hendrick ter Brugghen. The painting called Roman Charity, dated 1623, had been out of sight before recently resurfacing in an Italian collection. The existence of the painting was already known to the public due to seventeenth-century documentation.

Assistant Curator Adam Eaker is delighted with the acquisition and explains why it is such an important addition to the Met’s collection:

“This painting is an exceptional work of Dutch Caravaggism, a significant movement not previously represented in The Met’s collection. Depicting the classic baroque subject of “Roman Charity,” in which a daughter breastfeeds her father, who has been sentenced to death by starvation, the compositions blends transgression with pathos. Like other works inspired by Caravaggio, Ter Brugghen’s painting derives its power from theatrical contrasts of light and dark, dramatic storytelling, and realistic depiction of the human body. The artist is particularly masterful in his description of the wrinkled soles of Cimon’s feet and the rich textiles of Pero’s attire. Unlike many other seventeenth-century artists, Ter Brugghen emphasizes the episode’s solemnity, largely covering up Pero’s nudity and directing the viewer’s attention to her father’s wasted frame. The painting is most likely the Roman Charity by Ter Brugghen that is recorded in the collections of Anna Hoeffijsers in Dordrecht (1674) and Abraham Perroneau in Amsterdam (until at least 1687), but had been out of sight for over three hundred years until its recent rediscovery.” 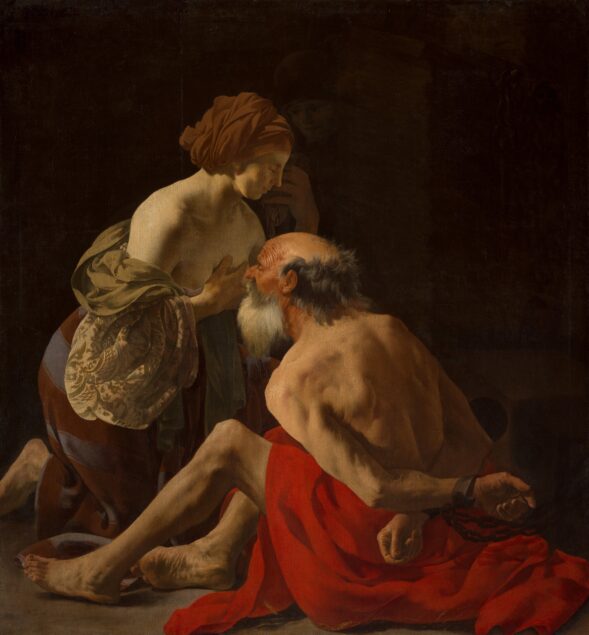 The painting is the second Ter Brugghen for the Met’s collection, next to The Crucifixion with the Virgin and Saint John. Furthermore, the Met already holds two paintings by Caravaggio himself. With this new acquisition by Ter Brugghen the museum has gained the opportunity to present Caravaggio, his followers, and his remarkable impact on art history to the public in an even more meaningful way. Learn more about Ter Brugghen’s Roman Charity on the Met’s website.