The Mauritshuis acquired a rare painting by Willem Buytewech. Only six paintings by the artist are known. With Merry Company on a Terrace from ca. 1616-17, the museum has secured a key work in the development of early Dutch genre painting. 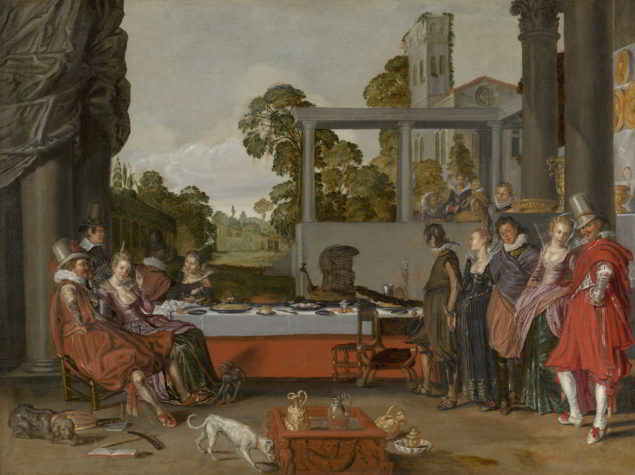 The Mauritshuis already had landscapes, still lifes, history paintings and portraits from the early seventeenth century in its collection, but until now there had not been a representative genre piece. Buytewech portrayed the subject of young people eating, drinking and enjoying themselves with great virtuosity and humour. Several couples are shown gathered around a richly-laid table on an elegant terrace in a palatial setting. The only thing that is not entirely clear is who is with whom and who is flirting with whom?

Willem Buytewech was a prominent artist in early seventeenth-century Haarlem. He was known as ‘Geestige Willem’ (Witty Willem) in his own lifetime, a nickname that alludes both to his witty inventiveness and to the humor in his depictions. A large body of graphic work by him is known (125 drawings and 32 etchings), but only six of his paintings have survived. The painting was acquired with the support of the BankGiro Lottery