Following its restoration, The Gallery of Cornelis van der Geest has returned to the Rubens House in Antwerp. The original paint layer has been exposed again, revealing details that have remained hidden for many years. The wood cradle proved to be the greatest challenge for the restoration team, however. For centuries, high tensile forces in the wood caused repeated damage. A tailor-made secondary support was developed, drawing on an innovative technique from the aviation industry.

The Gallery of Cornelis van der Geest is one the masterpieces of the Rubens House. Willem van Haecht’s painting is included in the CODART Canon and the Flemish List of Masterpieces. 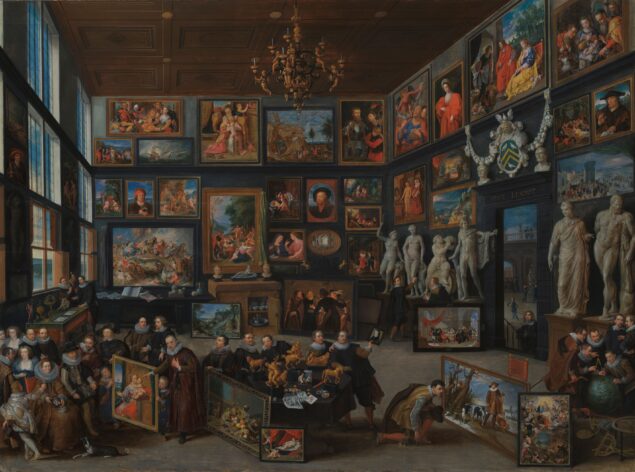 The painting was last restored in 2009, when the Rubens House developed an exhibition centering on this painting and the unique genre of the painted art galleries, titled Rooms full of Art. The Gallery of Cornelis van der Geest . At the time, the emphasis was on the paint layer and the frame. A climate box was applied around the painting to increase the painted panel’s stability. Despite all these measures, craquelures (crack patterns), cracks and tenting reappeared in various places ten years later. The restraint of the cradle also proved to be a cause for cracks. It therefore became clear that a durable solution was needed. In April 2019, Willem van Haecht’s masterpiece left for the Royal Institute for Cultural Heritage (KIK-IRPA) in Brussels for analysis and restoration by panel expert Aline Genbrugge. The restoration process is further explained in detail in the museum’s press release.

The return of The Gallery of Cornelis van der Geest also marks the start of the last weeks of Ben van Beneden’s tenure as the director of the Rubens House. He retires in September.

Ben van Beneden was appointed to the position in 2010. Together with his team, he developed several international exhibitions, including Rooms full of Art, Palazzo Rubens, and Rubens in private. His main priority, however, was the upgrade and enrichment of the collection and the artist’s residence. He drew attention to the urgent need for the restoration of the portico and garden pavilion – the original elements of the house, which were designed by Rubens himself. After several years of preparation, the project was successfully completed in 2019. The restoration and the protective glass butterfly awning met with international praise and appreciation. Van Beneden applied this same precision and boldness to the art collection, paving the way for the restoration of Rubens’s Self-Portrait, among others.

Loans from public and private collections were another priority in Ben van Beneden’s policy was the. Lacking the budget for acquisitions, he instead searched for inventive solutions to supplement and elaborate on the story of Rubens. As such, van Beneden was able to exhibit several masterpieces at the Rubens House, such as The Massacre of the Innocents and ‘David Bowie’s Tintoretto’. He also worked very closely with the King Baudouin Foundation. Thanks to this collaboration, the Rubens House has a masterpiece of exceptional quality on permanent loan: The Apostle Matthew, by the young Sir Anthony van Dyck. He also helped co-found the Rubenianum Fund, an organisation that is financing the catalogue raisonné of Rubens, under the auspices of the King Baudouin Foundation: the Corpus Rubenianum Ludwig Burchard. Under van Beneden’s management, the number of annual visitors to the Rubens House gradually increased from 150,000 to 210,000 in 2019.