A painting by Salomon van Ruysdael that has never been publicly displayed before has been acquired by the United Kingdom and allocated to Birmingham’s Barber Institute of Fine Arts in Birmingham via the Acceptance in Lieu scheme. This scheme enables taxpayers to transfer important works of art and heritage objects into public ownership while paying inheritance tax.

A Cavalry traveling through a Wooded Landscape by Salomon van Ruysdael (ca.1600/1603 – 1670), one of the pioneering painters of naturalistic landscapes in Holland during the 17th century, will go on display this Friday.

The painting dates to 1653, when Ruysdael had begun to shift from his ‘tonal’ style, in the vein of Pieter Molijn (1595-1661) and Jan van Goyen (1596-1656), to his later ‘classicizing’ paintings. His famous nephew, Jacob van Ruisdael, was later to become the superlative practitioner of this style. The change can be seen in the picture: the horizon is lower forcing the sky into greater prominence, and the composition has a central focus. A limited palette means the brightest colors – such as the orange of the cavalry’s clothing – are emphasized. Ruysdael’s expressive composition contrasts monumental trees bent by the wind, with a zigzagging pathway traversed by a cavalry train. 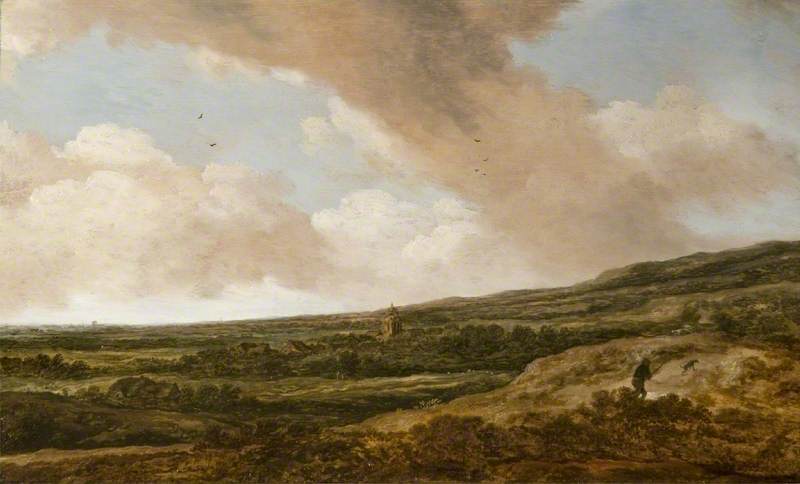 The Barber already has in its collection Molijn’s A Landscape with a Huntsman (ca. 1640s) and van Goyen’s Cottages in a Landscape with a Well (1631) which will serve as excellent predecessors to the more mature Ruysdael painting. Jacob van Ruisdael’s contemporary A Woodland Landscape (early 1650s), shows the influence of Salomon’s work – both paintings include a small pool surrounded by numerous large trees.

The painting was formerly in the collection of the Viscounts Dungannon, of Brynkinalt House, near Chirk in Denbighshire, who claimed descent from the ancient kings of both Ireland and Wales. It was apparently acquired in the late eighteenth century by either the 1st Viscount (about 1694-1771) or his grandson, the 2nd Viscount (1763-1837), both called Arthur Hill-Trevor, and then passed by descent. It has never been published or previously exhibited publicly, and is an important as well as a beautiful addition to the collection.