For more than 30 years, the painting Landscape with Arch Bridge was considered to be a work by one of Rembrandt’s students, Govert Flinck. However, recent discoveries have revealed that the work was created by the master himself.

Landscape with Arch Bridge entered the Berlin collections in 1924, and up until the 1980s, was always considered an authentic work by Rembrandt Harmensz. van Rijn. In 1989, in the course of the investigations carried out as part of the Rembrant Research Project, it was written off as a work by Rembrandt and ascribed to Govert Flinck. 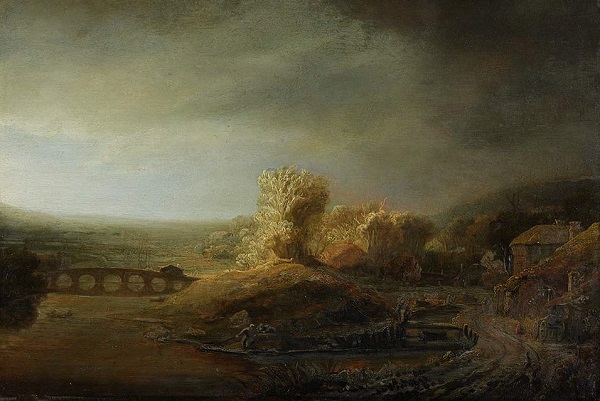 Recent examinations of the Berlin painting and the evaluation of technical photographs, which were not available in 1989, have now confirmed that the work was painted by the artist himself. It is now possible to identify changes and corrections in the painting that were made during the painting process. In this way, the development of the composition with its masterful lighting and the stimulating chiaroscuro contrasts becomes comprehensible. In contrast, the Amsterdam painting is hardly characterized by modifications and interventions of the artist. Accordingly, the work of the Gemäldegalerie should not be regarded as a successor, but rather as a precursor of the Amsterdam landscape. This conclusion is supported by the dendrochronological findings, which point to a later date of origin for the Amsterdam painting. The major revisions Rembrandt made to the Berlin work also explain the striking differences in the painting style of the two pictures. In the Berlin version it is comparatively dense and compact, in the following Amsterdam version translucent and precise.

Landscape with Arch Bridge will now round off the significant Rembrandt collection at the Gemäldegalerie, comprising some 20 works. From 9 April 2022, it will feature in the exhibition David Hockney – Landscapes in Dialogue: The Four Seasons from the Würth Collection on Display in Berlin (until 10 July 2022).