Last Sunday, 30 August 2009, a fire demolished part of the interior of the Baroque Church of St. Charles Borromeo (former Jesuit Church) in Antwerp. Due to the installation of very intense light spots in the galleries of the church (second level along both sides of the nave) during a concert on Friday night, some wooden beams were overheated and caught fire in the morning. The resulting damage occurs in the south gallery. Smoke and water damaged the 18th-century confessionals and the 17th-century pulpit.

This was not the first time fire broke out. On 18 July 1718 the church was struck by lightning. In the ensuing fire, Rubens’s ceiling paintings along both levels of the galleries were lost. 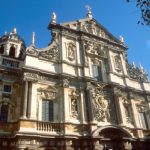