The eighteenth-century ceiling painting The Gods on Mount Olympus will be transported to Antwerp’s Hofkamer building on 25 August. The largest ceiling painting in Western Europe was removed from the Hofkamer for restoration in December 2008. Following its restoration, the painting was on view at the Rubenianum for six years, while the Hofkamer building was renovated. It will go on public display in June 2017. 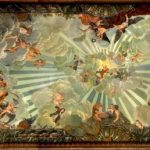