The Last Judgment altarpiece by Lucas van Leyden has been put on display in the Gallery of Honour at the Rijksmuseum. It is very rare for the sixteenth-century masterpiece to leave Leiden. In its 489 years of existence, it only left the city twice. The painting will remain in Amsterdam for a period of two years while Museum De Lakenhal is closed for renovations.

Information from the Rijksmuseum, 23 August 2016

Lucas van Leyden (1494-1533) was recognized as a prodigy throughout Europe at an early stage because of his sublime etchings and drawings. This draughtsman, printmaker and painter was an important source of inspiration for many generations of painters, Rembrandt van Rijn among them. Rembrandt was brought up in Leiden and it was there that he embarked on his career as a painter. The Last Judgement was on show in Leiden Town Hall continuously from the end of the sixteenth century until it was moved to Museum De Lakenhal in 1874. Rembrandt is certain to have seen it there. The painting’s presentation in the Rijksmuseum is a unique opportunity to show the triptych in the Gallery of Honour in the context of Rembrandt masterpieces.

Lucas van Leyden (1494-1533) is known as the pioneer of the Renaissance in the Northern Netherlands. His prints depicting biblical and secular subjects stood out because of their unprecedentedly refined engraving technique and narrative quality. After 1520 Lucas started to concentrate on painting and he made three altarpieces, including The Last Judgement and The Dance around the Golden Calf (c. 1530, Rijksmuseum collection). A striking aspect of his work is the suggestion of immeasurable space, as exemplified in The Last Judgement. The huge triptych, which dates from 1526-27, is the pinnacle of his oeuvre. The painting shows how the dead arise from their graves on the Day of Judgement in order to meet their destiny. They are carried by gentle angels or by diabolical figures. The painting was commissioned for the Church of St Peter in Leiden. Shortly thereafter, during the iconoclasm, it and other art treasures were taken to safety by the Leiden city authorities. Since 1874 the altarpiece, together with Leiden’s municipal collections, has been permanently accessible to the public in Museum De Lakenhal. The Last Judgement has left Leiden only twice in the last 450 years.

Museum De Lakenhal and the Rijksmuseum signed a cooperation agreement in 2014. It covers collection mobility, scientific historical and art historical research, research into materials, techniques and restoration, and exhibitions and public outreach. This special loan is part of the agreement. During the coming year a further nine works of art from Museum de Lakenhal can be seen in the Rijksmuseum.

In 2015 The Last Judgement was the subject of a joint investigation by the Rijksmuseum, Museum De Lakenhal and the Netherlands Institute for Art History (RKD). During it a virtuoso underdrawing was discovered. From 23 August this underdrawing is being presented actual size in Museum De Lakenhal until the museum closes its doors for the renovation and extension project.
Educational Projects

The Rijksmuseum has incorporated the altarpiece in the educational programme with, among other things, a special zoom feature, and as part of the multimedia tour. 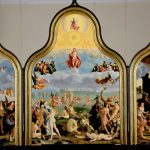