On 15 december 2022, the Dutch Restitutions Committee gave its advice on the restitution application concerning four silver salt cellars by Johannes Lutma (1584–1669). Two of the salt cellars are in the Amsterdam Museum, while the other two are in the Rijksmuseum. The committee recommends returning the salt cellars to the heirs of the German Jewish Emma Budge (1852–1937).

Between 2009 and 2013 the Amsterdam Museum conducted a provenance investigation into the two Lutma salt cellars in its collection. This research revealed the salt cellars were from the collection of Emma Budge, a Jewish woman from Hamburg. After her death in 1937, her art collection was auctioned off in Berlin. At that time, numerous anti-Jewish measures were being implemented in Germany. 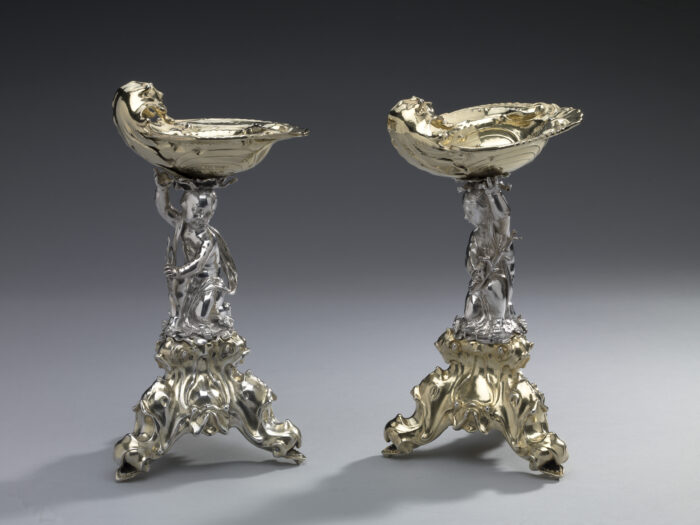 The two salt cellars by Johannes Lutma from the Amsterdam Museum were purchased by the municipality of Amsterdam in 1960. Lutma was one of the most talented silversmiths of seventeenth-century Amsterdam, and is even referred to as the “Rembrandt of the applied arts.” The salt cellars are produced in what is known as the auricular style, where organic and softly flowing shapes are crafted into a spectacular decorative piece. Lutma mastered this style like none other.

The salt cellars have always been displayed in the museum’s permanent exhibition. Salt was very costly in the seventeenth century and held an esteemed place at the table. Salt cellars were therefore viewed as a symbol of status and wealth in seventeenth-century society.

At this moment, Lutma’s salt cellars are on display in Panorama Amsterdam: A Living History of the City, the collection presentation at the Amsterdam Museum on the Amstel. They are exhibited as part of the broader topic of the Second World War, an example of artworks in the city of Amsterdam’s collection which have a controversial provenance.

The advise of the Restitutions Committee is published on their website.