The Museo del Prado has presented The Triumph of Death by Pieter Bruegel the Elder following its recent restoration. Formerly in the Spanish Royal Collection, this was the only work by Bruegel in Spain until 2011 when the Museum acquired The Wine of Saint Martin’s Day. The Triumph of Death is a moralizing work that shows the triumph of Death over worldly things, a recurring theme in medieval literature for which Bruegel was influenced by Jheronimus Bosch. 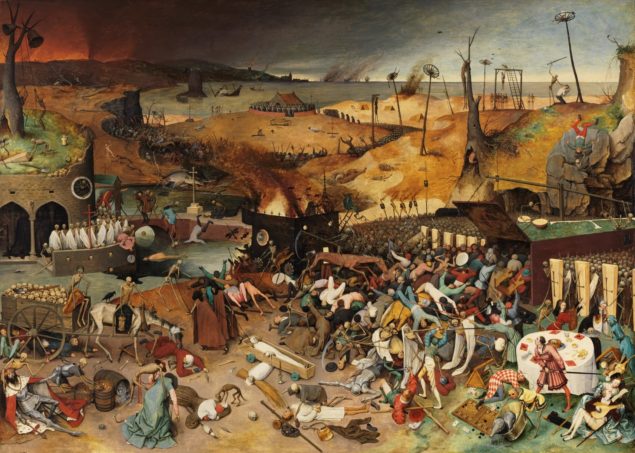 The restoration, undertaken by María Antonia López de Asiain (pictorial surface) and José de la Fuente (support), has reinstated its structural stability and its original colors, composition and unique pictorial technique based on precise brushstrokes which achieve transparency in the background areas and remarkable crispness in the foreground plan.

At an unknown date the four horizontal oak panels on which Bruegel’s work is painted were planed to reduce their thickness. At this same moment they were reinforced with a cradle that prevented any natural movement of the wood.

At the time the support was reduced to its present thickness (between 6 and 8 mm), the four panels of which it is made up were separated then reassembled. During the latter process the internal edges of the panels were sanded which removed part of the paint, visible above all in the diagonal elements and figures on the pictorial surface. The join between the panels was not well levelled-off and in order to disguise this the adjoining areas were covered with gesso and repainting which concealed part of the original. Furthermore, when the panels were separated the upper one was damaged, resulting in various cracks running from one end to another.

Given the state of conservation of the support, the present restoration has removed the cradle in order to free up the natural movement of the wood. In addition, the cracks and the panels have been realigned to form a level surface, involving the separation of the top panel in order to ensure that it lies flat.

Having restored the cracks and joins a secondary support (a beech wood stretcher) was made to the exact curvature which the panel assumed once the cradle had been removed. This was done to ensure stability, respecting its hygroscopic movements.

The stretcher was joined to the painting using a system of flat, stainless steel springs that were adhered to the support using brass buttons in a reversible manner. These springs are inserted into nylon screws that allow for any movement in 360º of traction, dilation and contraction within the plane.

The painting, which was carefully prepared down to the smallest detail through a preparatory cartoon, was hidden under a large amount of re-painting from different earlier restorations which were in turn subsequently masked by coloured varnishes to produce a uniform effect, completely transforming the painting’s appearance to an ochre, almost monochrome one.

The work has required a complete cleaning. This has been a complex undertaking due to the subtlety of the thin layer of original pigment in contrast to the thickness and hardness of the areas of repainting. Removing the overall repainting has succeeded in removing the warm toned veil added in earlier restorations, thus revealing previously concealed details of the original painting. The overall tonality has changed and it is now possible to appreciate its crisp blue and red tones. Finally, the complexity of the composition and depth of the landscape have been re-established.

Infra-red reflectography and a study of the copies made by Bruegel’s sons based on the same cartoon have made it possible to correctly reintegrate small lost elements that were simply invented with incorrect reconstructions during earlier restorations.