Every year the RKD hosts five free art evaluation sessions, which allow members of the public to drop in and show works of art to an expert. During the most recent session, on Thursday 31 January, our experts once again made a notable discovery: close inspection of a hitherto unpublished painting by Philips Wouwerman (1619-1668), which had previously been rejected as a work of the artist, revealed that it was an autograph work after all. Philips Wouwerman is an important artist whose paintings exchanged hands for very high prices in his own lifetime.

The authenticity of Wooded landscape with peasant folk gathered outside an inn, with a well, ducks and horses was the subject of controversy after it underwent restoration in 2010. But experts at the RKD, led by Wouwerman connoisseur Marijke de Kinkelder, were struck by the painting’s exceptional quality, especially the fine painting technique, which is one of the artist’s hallmarks. His slightly younger brother, Pieter (1623-1682), worked in the same style, but never quite matched the level of Philips’s achievements. The painting’s composition was known from a copy that was sold in 2003 by the auctioneers Kunsthaus Lempertz in Cologne.

Wooded landscape with peasant folk gathered outside an inn, with a well, ducks and horses was bought at auction in New York in the 1960s and has been in a private collection in the Netherlands ever since. 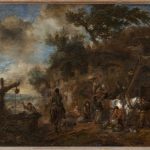