The Ashmolean has uncovered a painting in its stores, bequeathed to the Museum in 1951, which can now be confirmed as having been painted in Rembrandt’s workshop in ca. 1630.  The tiny picture, Head of a Bearded Man, is a portrait study of an old man with a downcast gaze, typical of Rembrandt’s work at this time. 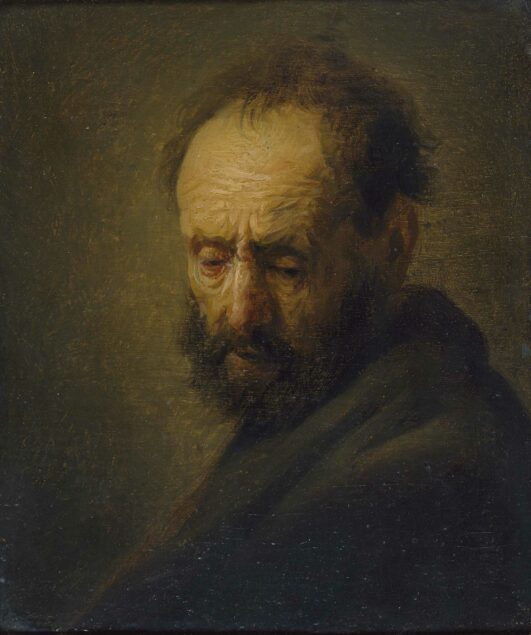 The painting was bequeathed to the Museum by a British art collector and dealer and entered the collection as an early Rembrandt.  A printed label stuck to the back of the painting has been cut out from the catalogue of a Paris auction which took place on 25 February 1777.  The text reads: ‘A Head of an Old Man, painted by Rembrandt. Very (realistic/ true to nature?) colour; height, six pouces by five wide.’  But it was rejected in 1982 by the Rembrandt Research Project, who believed it to be the best of a number of copies of a lost original.  Another version is in the Museum of Fine Arts in Houston.

Label from a 1777 auction catalogue

Taking the Young Rembrandt exhibition as an opportunity to re-examine the painting, curator and CODART member An Van Camp and conservators Jevon Thistlewood and Morwenna Blewett, brought the picture out of the stores to analyze it with the help of Professor Peter Klein, an internationally renowned dendrochronologist.  He has established that the wood panel on which it is painted comes from the same tree used for Rembrandt’s Andromeda Chained to the Rocks (ca. 1630, Mauritshuis, The Hague) and Jan Lievens’s Portrait of Rembrandt’s Mother (ca. 1630, Staatliche Kunstsammlungen, Dresden), both painted when the artists were working in Leiden.

This Wednesday the painting will be added to the Young Rembrandt exhibition where it can be seen alongside other works of the same period, before undergoing further study and conservation in the Ashmolean’s labs to determine whether there is evidence of Rembrandt’s own hand in the work.