The Cultural Heritage Fund of the Belgian Koning Boudewijnstichting has recently acquired an album containing thirteen original drawings of Hans Bol. The organization bought the album, which comes from the´‘Emblemata evangelica ad XII signa codestica’ at Christie´s in London.

This album contains the complete and previously unpublished set of preparatory drawings for the Emblemata Evangelica: a series of prints designed by Hans Bol, engraved by Adriaen Collaert and published by Johannes Sadeler (1550-1600). Complete series of print designs by Bol are extremely rare and, in the present case, the album includes not only the drawings for the twelve months in the series, but also the design for the frontispiece and an impression of each of the related prints, mounted opposite its preparatory study.
Hans Bol was born in Mechelen, where the Archduchess Margaret of Parma had established her court as Governor of the Netherlands, and which had consequently developed a flourishing artistic community. Following decades of increased religious tensions, Mechelen declared itself for the Protestant rebel William of Orange, a decision that led to a brutal sacking of the city by Spanish troops in October 1572. Having lost everything, Bol moved to Antwerp, where he already had contacts with printmakers and publishers such as Hieronymus Cock, for whom he had already provided print designs in 1561-62. He remained there until 1584, when he was once again forced to flee ahead of the Spanish army. For some years he moved between Bergen-op-Zoom, Dordrecht and Delft, before finally settling in Amsterdam. He was celebrated by his contemporaries for his imaginative small-scale works, which show extensive landscapes dotted with Gothic castles and mansions. His exquisite work as a miniaturist in Les Heures du Duc d’Alencon, an illuminated manuscript (1582, BnF), highlights Bol’s delight in detail and ornament.

The Emblemata Evangelica series was executed in 1585 with all the accomplished intricacy of Bol’s mature style. Each drawing is signed and dated, and the artist appears to have started with the month of December, which is dated in the unusual form ‘15845’. He had already collaborated with Collaert on a closely comparable series of prints five years earlier: The Twelve Months, for which the complete set of preparatory drawings also survives, in the Museum Boijmans Van Beuningen, Rotterdam (see Bosch to Bloemaert: Early Netherlandish Drawings in Museum Boijmans Van Beuningen, Rotterdam, exhib. cat., Paris, Fondation Custodia, Rotterdam, Museum Boijmans Van Beuningen, and Washington D.C., National Gallery of Art, 2014, no. 32). That series of twelve roundels adopted the medieval tradition, established in books of hours, of showing each month or season with its associated labours and, unlike the present Emblemata Evangelica series, it is a purely secular cycle.

While the Emblemata Evangelica series retains the scenes of seasonal labour that Bol had previously used in The Twelve Months, and indeed often reworked, these are moved to the backgrounds of the compositions. The foregrounds are occupied by scenes from the New Testament showing the youth or ministry of Christ. As in The Twelve Months, each month is shown with its associated sign of the zodiac.

The rediscovery of this remarkable and intact series is of great significance for the understanding of Bol’s working methods as a draughtsman and print designer and forms an important addition to his oeuvre. The drawings will be published in Stefaan Hautekeete’s forthcoming New Hollstein volume on the prints of Hans Bol.

The album once formed part of the celebrated library of the Marquess of Blandford at White Knights. In the 1819 sale catalogue it is describes as containing “remarkably fine impressions of the plates, by Sadeler, together with the beautiful original drawings by Hans Bol. Inlaid on fine drawing paper, and splendidly bound in red morocco”. The description remains true today. Among the many treasures of the White Knights Library was “a unique assemblage of books of emblems”, of which the present album was its greatest monument, and its emblem book collection retained its reputation for quality and comprehensivenss for a century; the absence of an emblem book in the Blandford collection was considered a strong indication of rarity by later bibliographers and collectors in the field. 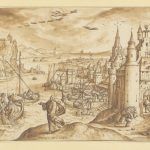 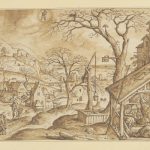