As of 31 October Museum Briner & Kern in Winterthur is forced to close it doors. The city council has decided this after arguing that the Museum was no longer able tot sustain itself. The Swiss Museum boasts a excellent collection of Dutch Masters, including Jacob van Ruisdael, Jan Both, Pieter Lastman, Samuel van Hoogstraten, Ferdinand Bol, Pieter de Hooch and many others.

Some of the artworks that form the collection, which consists of the bequests of Jakob Briner (1882-1967) and Emil Kern (born 1914), are temporarily being housed in the Oskar Reinhart Museum, others will be sold off in the near future.

A more detailed news item (in German) can be found here: 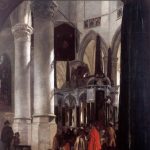