The Art Gallery of Hamilton has agreed to return a picture by Johannes Verspronck (1600-1662) to its rightful owners. The Canadian museum agreed to return Versproncks Portrait of a Lady to Sarah Solmssen, great granddaughter of Alma Bertha Salomonsohn. The portrait was originally purchased by Salomonsohn’s husband, Arthur, who acquired a large art collection while he was Chairman of the Board of the Deutsche Bank. After the Nazi’s confiscated the painting and other items in his possession, they sold it at auction in 1941. Being unaware of the picture’s provenance, the Museum received it the after it was bought by the Gallery’s Volunteer Committee in 1987 at a Sotheby’s auction in New York.

Mrs. Salomonsohn began her search for the picture after immigrating to the United States. She contacted a law firm that specializes in stolen art to help her track down the Verspronck. In 2003 the firm notified the Art Gallery of their suspicion that the painting was stolen. “The Art Gallery of Hamilton is the guardian of one of the finest permanent collections in Canada and Portrait of a Lady holds a very special place it in,” said Louise Dompierre, President and CEO. “In making our decision to return Portrait of a Lady we have been guided by international law, the 1998 Washington Conference Principles on Nazi-confiscated Art, to which Canada is a signatory, and our own extensive research into the history of the painting’s ownership. It is a great pleasure to return the painting to those whom we believe, to the best of our knowledge, are its rightful owners.”

Portrait of a Lady will be on display in Hamilton until April 26, 2015. 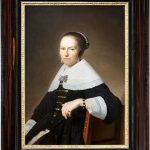