Information from the museum, 10 November 2014

Return of the Rembrandt

Thanks to a generous grant from Bank of America Merrill Lynch through its global Art Conservation Project, the only Rembrandt painting in the Czech Republic has been returned for display at the Šternberk Palace in Prague following extensive research and restoration that took almost a year to complete.

The restoration of the painting, Scholar in his Study was followed by a period of thorough analysis using modern methods. The National Gallery, headed by restorer Adam Pokorný, cooperated with the international mobile laboratory MOLAB which has a special scanner enabling the capture of photos at various depths of the infrared spectrum. On the basis of the photographs taken, it was possible to study the under-drawing as well as changes carried out by the artist and secondary interventions such as fillers and retouching. There was also investigation of the pigments used, the detailed analysis of which was carried out by the chemical-technological laboratory of the Prague National Gallery and the laboratory of KIKIRPA (Koninklijk Instituut voor het Kunstpatrimonium) situated in Brussels. During the investigation of the work it was discovered, amongst other things, that Rembrandt had changed the beret that he had originally intended, to a turban. A further surprising finding was the fact that the red organic pigment used for the shadow of the book, the fur of the cape and the tablecloth, is not resistant to light and has lost a considerable amount of colour over the centuries, this being the cause of the today evident greyish tone of the painting in these parts.

More technical information on the restoration, including pictures, can be viewed here (in PDF). 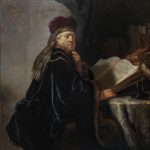