Germany has agreed to return a still-life by Dutch painter Jan van Huysum to the Uffizi Galleries. Vase of Flowers was looted from Palazzo Piti in Florence during World War II and remained in Germany ever since. The news follows a public campaign by the museum’s director, Eike Schmidt. Earlier this year, Schmidt hung a black and white copy of the painting at the Palazzo Pitti, with the word “stolen” in English, German and Italian on it.

According to the Uffizi, the still-life by Jan van Huysum (1682-1749) was in the collections of the Pitti Palace since 1824, when it was bought by Habsburg-Lorraine Grand Duke of Tuscany Leopold II for the newly inaugurated Palatine Gallery. For over a century it remained on display in the Putti Room, together with other Dutch still-lifes from the seventeenth and eighteenth centuries. In 1940, when the palace was evacuated at the beginning of the war, the painting was brought to the Medicean Villa of Poggio a Caiano. In 1943 it was moved to the Bossi Pucci Villa, in Florence, until retreating German soldiers took it along with other works to Castel Giovio, in the province of Bolzano. There the crate containing the Vase of Flowers was opened and the artwork ended up in Germany, where it disappeared.

Italy’s foreign office announced that Heiko Maas, the German foreign minister, and his Italian counterpart Enzo Moavero will soon travel to Florence to hand the artwork back to the gallery.

Also see the article on The Art Newspaper website. 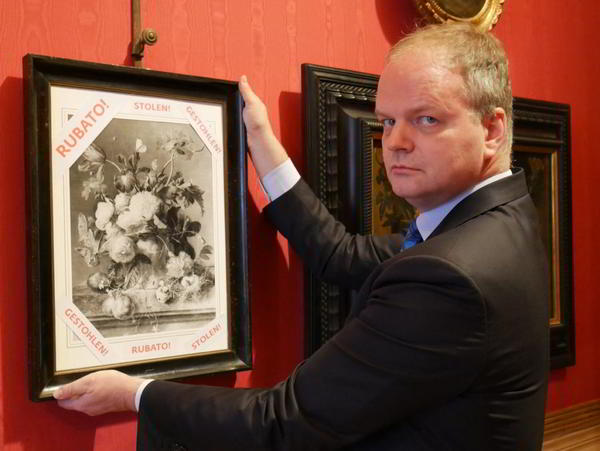 Uffizi director Eike Schmidt posing with a copy of the still-life
Photo: Uffizi Galleries on Twitter