The Mauritshuis has acquired three allegorical paintings by Nicolaes Berchem. Together with Allegory of Summer – which has been at the Mauritshuis since 1992 – they form an exceptional ensemble. The four paintings show the seasons and were made around 1670 to decorate an Amsterdam canal house. The series was broken up in the late nineteenth century, but has now been reunited.

In each painting, a medallion with the personification of the season seated on a chariot appears, pulled along in a procession by a pair of animals. Spring shows Flora, the Roman goddess of spring. Summer is represented by Ceres, god of grain and the harvest. Autumn is personified by Bacchus, god of wine. Finally Winter appears as an elderly man, rather than an ancient god or goddess. Around the medallions, figures and symbols connect the season with one of the four elements: spring with water, summer with fire, autumn with earth and winter with water. Owing to the fact that all the figures are interacting in a playful manner, everything seems to be in motion.

Berchem’s four seasons will be on view in the Mauritshuis’s Potter Room from 18 June 2019. The long-term plan is to display them as originally intended: as ‘overdoors’. 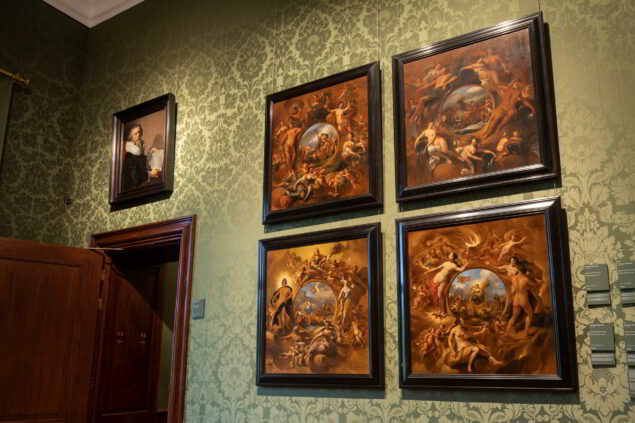