The former director of the Dutch history department in the Rijksmuseum, Dr. Wim Vroom asks CODART members for suggestions or possible leads to the current whereabouts of two of four panels depicting allegorical pageant cars during a “ommegang” in Antwerp and one depicting a solemn procession in the same city.

Two panels (here depicted in color) were formerly in the Harrach collection, Schloss Rohrau , Austria (catalogue 1960, no. 163 and 170), both 48 x 64 cm, one signed H HH W and dated 1621, described as The Glorification of the temporal and spiritual Power. They were sold at Sotheby’s London on 16 December 1999 and are now in a private collection in Holland.

The panels are of great importance to the history of the "ommegangen" in Antwerp.

Dr. Vroom is seeking the whereabouts of the latter two panels. Any suggestions are more than welcome. He can be reached on his email address: vroleeuw@xs4all.nl. 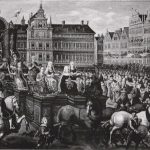 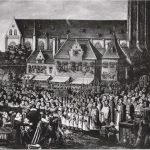 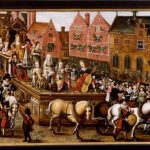 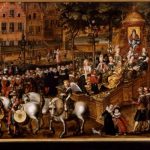