We were shocked last Wednesday morning in Bruges when we heard that our dear colleague and CODART member Veronique Vandekerchove from Leuven was fighting for her life after a tragic traffic accident. Thursday we heard the bitter news that she had passed away. Veronique was not only a well-known colleague, but also, without any exaggeration, a highly esteemed and much liked museum professional in Flanders. She was – as the press report from Leuven shows, the list of which is not even complete – active in many committees and boards, always willing to share her insights and experience, always willing to support other colleagues and other museums where possible.

Her greatest achievement, however, is the transformation of the Museum Vander Kelen-Mertens into the new museum M. Without any doubt she was the driving force behind the building campaign and the installation of the collections. It was also under her supervision and guidance that a number of outstanding exhibitions were organized – the Rogier Van der Weyden show in 2009-2010 certainly was a great moment. I do not think that any colleague would and could disagree if I were to describe her as an excellent museum professional, a good scholar, a caring and inspiring curator, a great organizer and above all a wonderful person.

Since arriving in Bruges in 2001 I had the honor and pleasure of getting to her know her rather well. We were member of the same advisory committees and boards, and there were several projects in which Bruges and Leuven were (and are) both involved. I truly enjoyed the many conversations we had, on art, museums, exhibitions, as well as on some occasions on those aspects of life that are far more important than work and career. What always struck me was her personality: warm, supportive, understanding, concerned. Her optimism and enthusiasm were striking, even at times when circumstances were more difficult. But it was also clear that perseverance was one of her other qualities.

Flanders and Leuven have sadly lost a remarkable and talented curator. I offer my deepest regrets and condolences to her family and friends. For the loss which they suffer, one fails to find words of consolation.

Veronique Vandekerchove (°1965), chief curator of fine arts and deputy superintendent of M – Museum Leuven, died on the evening of 25 January 2012 of injuries sustained in a traffic accident. Veronique had been a curator of the Stedelijk Museum Vander Kelen – Mertens since 1998. She was the moving force behind the new museum M, which opened its doors at the end of September 2009. Her passion for art, as well as her enthusiasm and warm personality, were an inspiration to all who knew her. She will be deeply missed by the entire team at M, who join in extending their sincere condolences to her family and friends.

Veronique Vandekerchove (1965-2012) obtained her degree in archaeology and art history from the Catholic University of Leuven (Louvain) in 1987. She joined the staff of the Stedelijk Museum of Leuven in 1992, first as a curatorial assistant and from 1998 as a curator. Veronique Vandekerchove had begun work on a doctoral dissertation on the panel painting Passietaferelen van Christus (Scenes of Christ’s Passion) (Brabant, 1470-1490) from the collection of the municipal museum. Her publications focused on the results of archaeological research carried out in Leuven, the preventive conservation of museum collections, and the collection of the municipal museum (its history, context and future). She was a member of numerous steering committees, advisory boards and work groups: 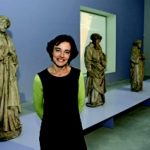