The Galleria degli Uffizi is world famous for its extremely rich holdings of Italian renaissance art. However it also holds a choice and high quality collection paintings by non-Italian artists. The Dutch and Flemish holdings include artists such as Rubens, Van Dyck, Rembrandt, Gerard Dou and many others. After an extensive restoration the first rooms of the so-called Nuovi Uffizi, are dedicated to those “foreign artists”.

After extensive work carried out concealed from the gaze of the public, at the Uffizi we are now beginning to see – or rather to experience – the new rooms of the gallery.
These rooms of domestic dimensions –’gabinetti’, or studies, where it was the custom to display works of small format – have been hung with works by foreign sixteenth and seventeenth-century artists: Spanish, French, Flemish and Dutch.

Since these areas occupy a portion of the museum not comprised within Vasari’s building, it has not been necessary to conform to the Vasarian colour scheme – almost excessively observed up to now – made up of the grey of the sandstone and the white of the walls. This colour scheme was followed by Gardella, Michelucci and Scarpa when they designed the six rooms that became a benchmark in the museology textbooks of the twentieth century (from the room of the three Maestà to that of the Pollaiolo), and which was faithfully reproposed in the two rooms inspired by them (the Lippi room and that of Leonardo). It is, nevertheless, a colour scheme that, continuing throughout the visit itinerary, ends up leaving a general impression of whiteness that has more the flavour of an infirmary than the dignity of abstraction. This is why I asked that a more vibrant, or frankly bright, colour be taken into consideration for the rooms devoted to the foreign painters; in this specific case the choice fell on blue, which in terms of culture and taste appeared to be best suited to the works for which these rooms have been conceived. The reception of this idea by the colleagues responsible for the “New Uffizi” project was immediate: an ulterior sign of a consensus that is increasingly consolidated and generates positive input for a fruitful continuation of the works.

Nonetheless, for the future we have to continue to ask ourselves – obviously not only as far as the Uffizi is concerned – whether a reflection is not called for on the aversion to colour which has afflicted us all for so many years. We need to discern its historic origins, even if only to account for the current colour of Florence, which logically derives from the (largely obligatory) colour of its facades: a lacklustre range of exclusively pale shades. 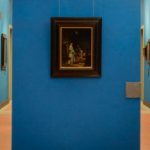 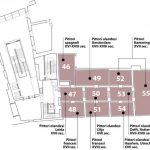