Today in the BELvue Museum in Brussels CODART’s 15th annual congress was opened. 140 CODART members will attend lectures, workshops and excursions in Brussels until Tuesday. This years congress theme is Conserving the arts: the task of the curator and the conservator?.

Tomorrow the Royal Museums of Fine Arts of Belgium will host the first day of the congress with lectures and the Market of Ideas in which the members discuss a wide range of subjects in smaller groups. Tuesday the congress moves to the Royal Museums of Art and History (Cinquantenaire Museum) for a panel discussion on the central congress theme, after which the group splits up for excursions throughout Brussels. 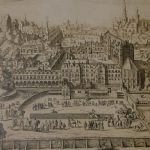