Today in the Kunsthal in Rotterdam CODART’s 13th annual congress was opened. 125 CODART members will attend lectures, workshops and excursions in and around Rotterdam. This years congress theme is Digitization: blessing or burden?.

At the opening reception, offered to CODART by the city of Rotterdam, the members were welcomed by Emily Ansenk, director of the Kunsthal, Ahmed Aboutaleb, mayor of Rotterdam and Gerdien Verschoor, director of CODART. Mayor Aboutaleb stressed the capacity of culture to build bridges between people. CODART congresses have been known to have that effect on its members since its start and the participants therefore have high expectations of the coming two days. 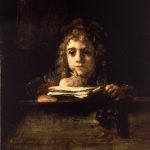