This article was originally published on the CODART website as part of a special compilation of articles titled ‘Celebrating Gerdien‘ which marked the end of Gerdien Verschoor’s directorship in 2019.

It is winter in Amsterdam and on Damrak—just about the oldest place in the city, where the water of the Amstel River flows into the IJ Bay—stands an artwork installed as part of the Amsterdam Light Festival. It was made by the US artist Alicia Eggert and displays the text “All the light you see is from the past” (fig. 1). She is referring to the time taken by light to travel. Although light conveys information, that information is already old when it reaches us.

I was asked by my former colleagues at CODART—to whom I could obviously never refuse a request—to write something about the future of our profession and of the museum. Still, how can I do that if I can only see the past? The main thing that predictions of the future have in common is that most of them turn out to be wrong. So, I am going to interpret my assignment a little differently. Instead of peering into the future, I will try to describe a trend that I have found extremely positive and enriching over the past few years. I am referring to changes in the direction of inclusiveness and the involvement of more voices in the museum world, and the ideas forming around those changes about our profession and what a museum could be. Readers can then form their own conclusions and expectations of the future. After all, as soon as the light from your screen reaches your eyes, these words already belong to the past—certainly given the rapid momentum of the developments taking place in this field.

Our field and our profession are changing because society itself is changing and with it, the public benefit served by museums. In the nineteenth century, when many of our museums, as we know them today, came into being, history, art history, and museums all served mainly to bolster a nationalist, or at least Eurocentric, vision. The art of the past, as well as accounts of the past, all served to connect the nation state, or the Western world in the wider sense, to a story that could inspire and perhaps prompt emulation. Such stories contributed to the sense of national identity and in some cases to a belief in the excellence or even superiority of the Western world.

In today’s Amsterdam, where over half of the population has a migration background, this story has long since outlived its usefulness. All museums, of course, wherever in the world they may be, have to take account of a growing number of perspectives in relation to their collections, exhibitions, and the way they choose to display artworks. Globalization, immigration, and mass tourism make our public more diverse than ever before.

When the black American writer James Baldwin holidayed in Leukerbad, Switzerland, in the early 1950s, he was an object of fascination: “From all available evidence no black man had ever set foot in this tiny Swiss village before I came,” begins his essay “Stranger in the Village.” In this essay, he describes with great clarity the differences in the way European culture is viewed by himself and by white Europeans, specifically the inhabitants of Leukerbad: “The most illiterate among them is related, in a way that I am not, to Dante, Shakespeare, Michelangelo, Aeschylus, Da Vinci, Rembrandt, and Racine; the cathedral at Chartres says something to them which it cannot say to me… . Out of their hymns and dances come Beethoven and Bach. Go back a few centuries and they are in their full glory—but I am in Africa, watching the conquerors arrive.”

To translate Baldwin’s painful feelings to our own field: if Rembrandt is at best irrelevant to half of my Amsterdam public and at worst evokes associations with the injustice that was done to their ancestors, it is a gigantic challenge to present “our” Old Masters in a way that will lead to a valuable experience for all our fellow city-dwellers and other visitors. Because we can’t deny that Rembrandt too has links to Baldwin’s “conquerors.” 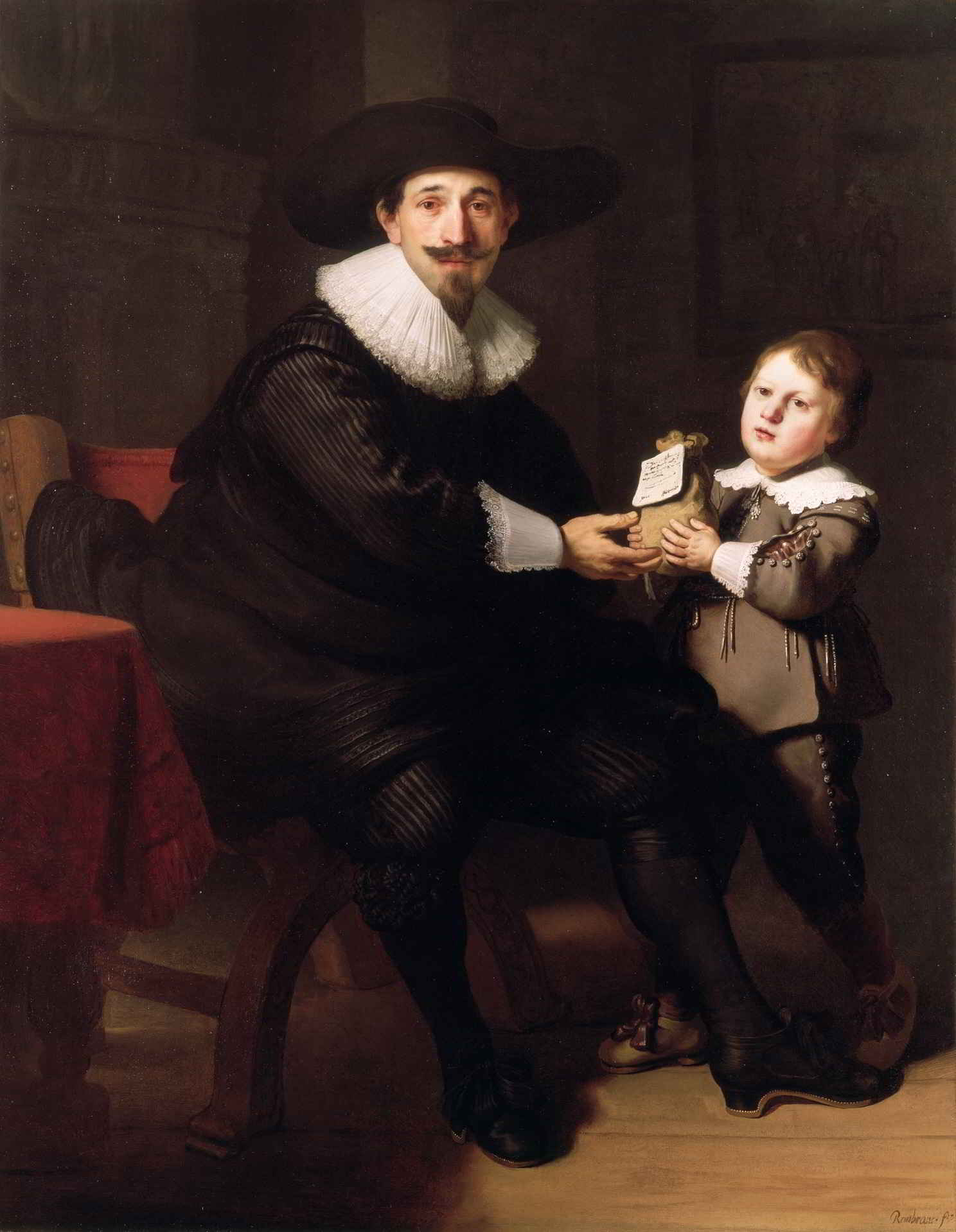 Commenting on the Portrait of Jean Pellicorne with his son Caspar (fig. 2), the website of the Wallace Collection states: “The portrait shows Caspar bringing his father a bag of money, symbolizing his duty as heir to act as future protector and provider for his family.” The painting shows the subject’s wealth and looks to the future in which four-year-old Caspar will be similarly wealthy. Rembrandt could not know at the time, but Caspar amassed his fortune partly through the trade in enslaved Africans. In 1677, Caspar signed a contract in which he and others undertook to supply approximately 1,800 enslaved Africans to what was then the Spanish West Indies. It leaves us with a bad taste in the mouth to reflect that this little boy—and many others who, like him, profited from colonialism—has a place of honor in our museums while the ancestors of people like James Baldwin remain invisible or anonymous. We know that people of African origin lived near Rembrandt on Sint Anthoniebreestraat. He made numerous drawings and paintings of them (fig. 3), but we do not know even the name of a single one of them. Furthermore, Rembrandt, like all the other European painters of his day, primarily painted black people in order to emphasize the status of the white subject of a portrait, or to add an exotic air to a history painting. 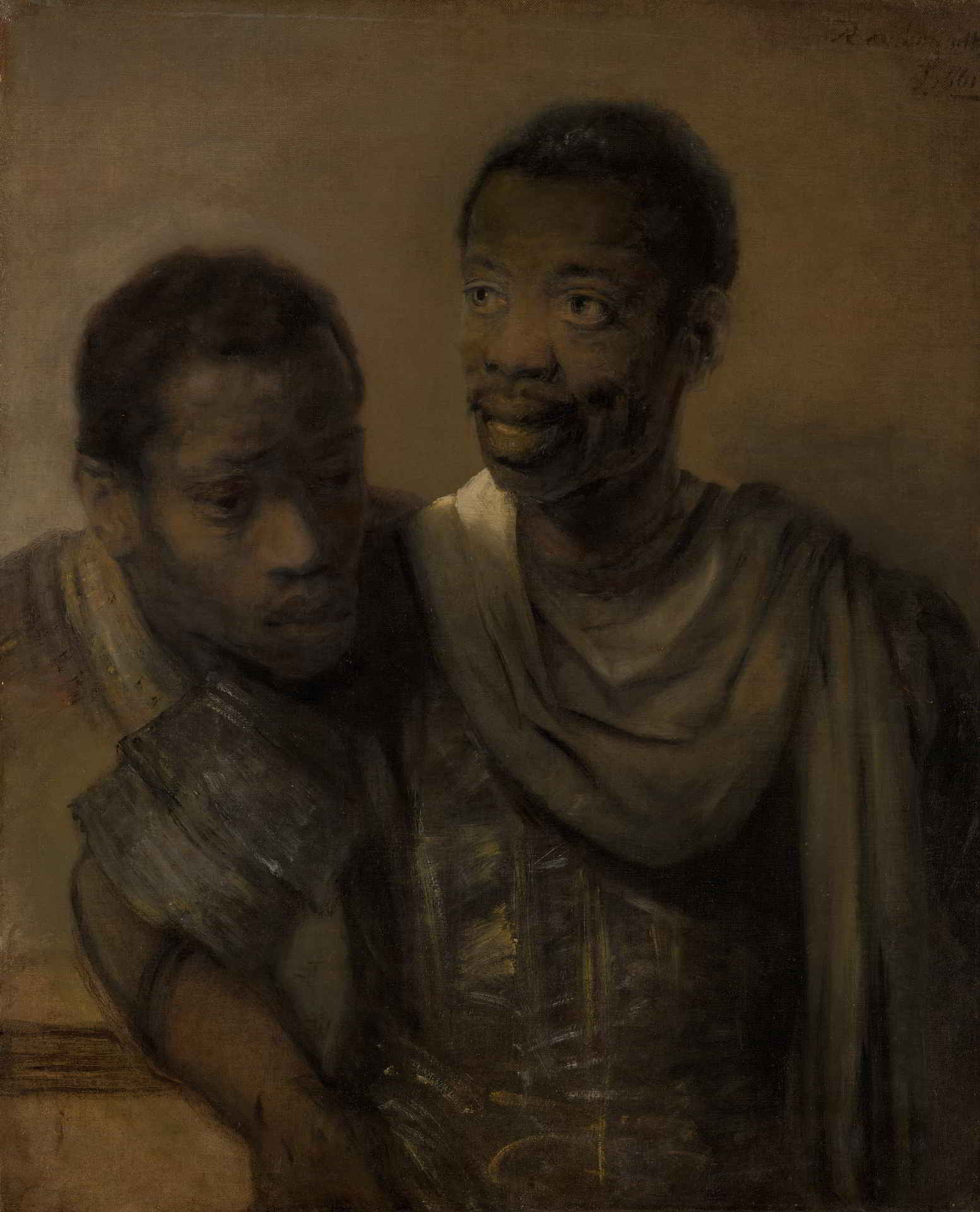 I am obviously not suggesting that we need to take down the works by Rembrandt and other Old Masters and move them to the storage facility. First, I think that another black American writer, the art historian Teju Cole, is right when he puts Baldwin’s comments in perspective. He regards African and European culture as his own in equal measure, and refuses to choose. He is glad that it all exists: “I am not an interloper when I look at a Rembrandt portrait. I care for them more than some white people do.”

In the second place, many associations may co-exist in Rembrandt. Of course, he is a protagonist of Holland’s “Golden Age,” which went together with slavery and colonialism, and Rembrandt has been promoted to the full as a national symbol. Still, that is not enough to explain his international appeal. What is more, those factors make up Rembrandt’s context, not his essence, as I see it. In the same essay as quoted above, in a volume entitled Known and Strange Things, Cole writes: “Bach, so profoundly human, is my heritage.” The same applies, of course, to the humanity of Rembrandt, who is capable of conveying so much emotion in his paintings, etchings, and drawings. Every viewer can respond to a baby that is just able to remain upright with shaky knees, supported by an adult (fig. 4). That has nothing to do with race, gender, religion, or power structures. 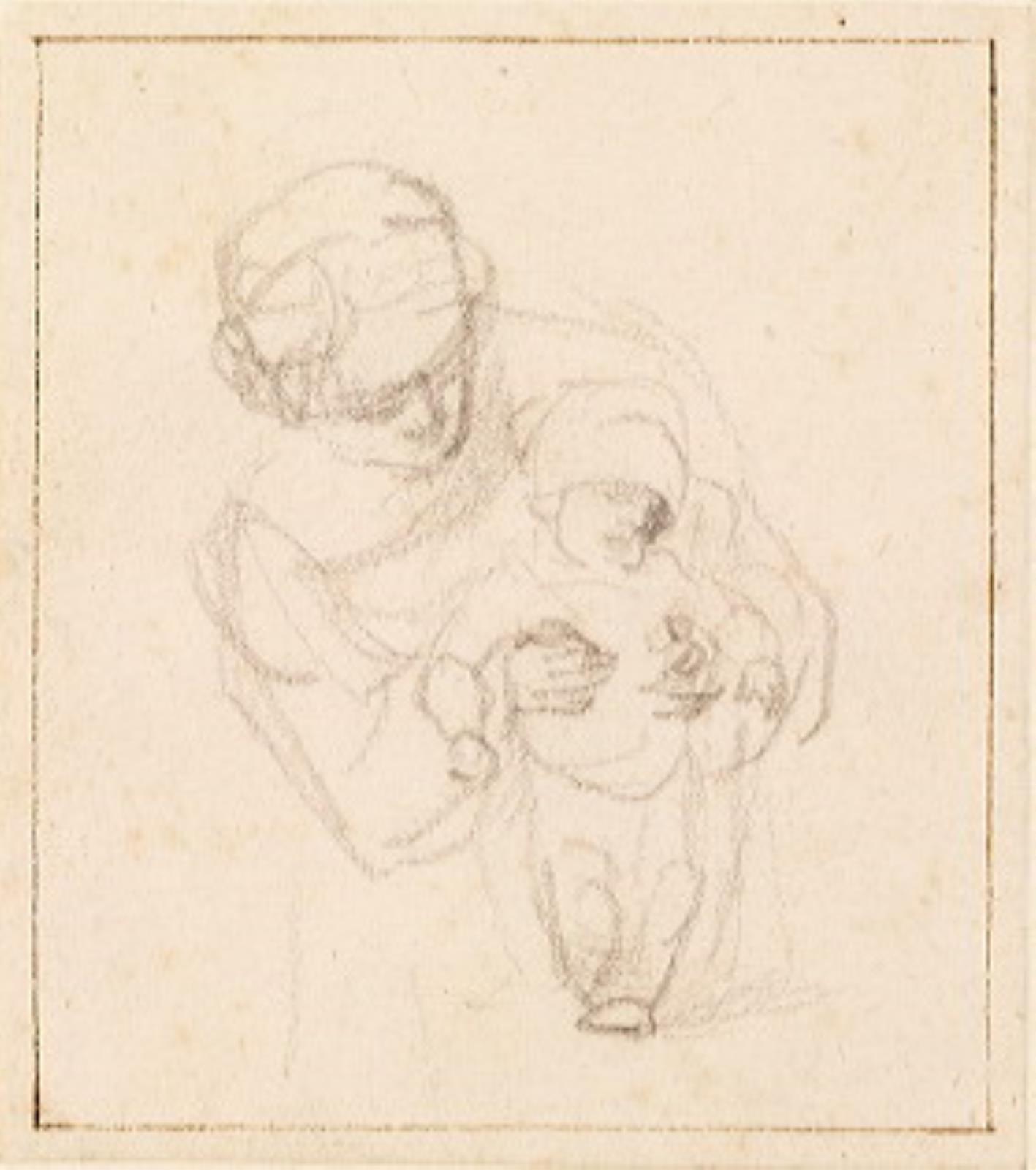 So, our material has a universal and objective core: that which is—an object—that in turn refers to that which happens. Around that core, we curators select context that we weave into a story. We need to show greater awareness that our curatorial story is subjective, that it is based on our own identity, and that it has a history and tradition that discourage others to get acquainted with the valuable heritage that we have in our care. Others have different stories to tell in relation to those objects and events—stories that are no less valid than those of our curators. Of course, we know more—it is our job to know more—about the objects and the events surrounding that heritage. Still, it is delusional to assert that the story we tell about it is objective, and it is wrong to use our knowledge as a shield or barrier to alternative interpretations. A better way to proceed is to convey our expertise to a diverse public for people to use as tools or instruments to enable them to make their own meaningful contact with the heritage and the past with which it is bound up. “All the light we see is from the past”—and let us by all means reach out and tell each other what we see. That will also greatly enrich our own view of the Old Masters.

Gerdien, thank you so much for the thirteen years during which you enabled CODART to flourish, and for the six years of which I had first-hand experience of your dedication in my position as webmaster. It was a wonderful time—not only because the CODART team was fantastic to work with, but also because if it were not for you, I bet I would never have read Wisława Szymborska, Bolesław Prus, Wiesław Mysliwski, or Zbigniew Herbert.

Tom van der Molen is Curator at the Amsterdam Museum. He has been a member of CODART since 2014 and was CODART’s webmaster from 2009 through 2014.