The CODARTfocus meeting in Budapest took place just before the opening of the very impressive Rembrandt and the Dutch Golden Age exhibition. So as well as a chance to network with colleagues, it provided an opportunity to study that show, which contains no fewer than 178 paintings, including twenty Rembrandts, three Vermeers and works by a further 110 artists arranged thematically. Forty-two colleagues gathered on Sunday, 26 October, including several who had travelled as couriers with works for the exhibition. The majority of delegates were from Eastern Europe or Holland and the numbers were favorable for socializing and networking. CODART and the Szépművészeti Múzeum, especially the curators Ildikó Ember and Julia Tátrai, are to be thanked for organizing such a rewarding event. 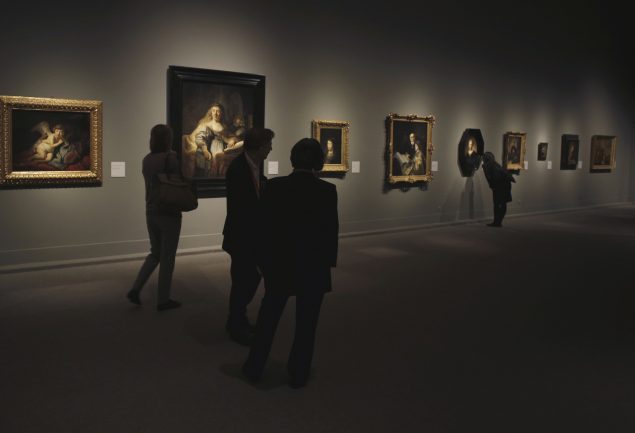 The main event on both days was a private view of the exhibition with Ildikó and Julia. Sunday’s proceedings began with welcome speeches from Gerdien Verschoor and Mária Mihály, the Museum’s deputy director. Ildikó gave an account of the making of the exhibition as well as a history of the series of exhibitions which the Museum of Fine Arts has organized since 2006 and which are designed to provide a comprehensive overview of regional schools. The shows stimulate visitors by mixing works from the exceptional holdings of the permanent collection with choice loans. The overriding aim on this occasion was to make the viewer fall in love with Holland and explain why so many Dutch pictures are to be found in Hungary. The project was launched in 2011 and greatly benefited from advance awareness of the temporary closure of the National Museum in Stockholm, which lent no fewer than thirty-one works, including one Rembrandt. Ildikó’s priority was to obtain works by Vermeer and Rembrandt. Although the Szépművészeti Múzeum’s own collections are particularly rich in Dutch works, all of their Rembrandts have been rejected in recent years. 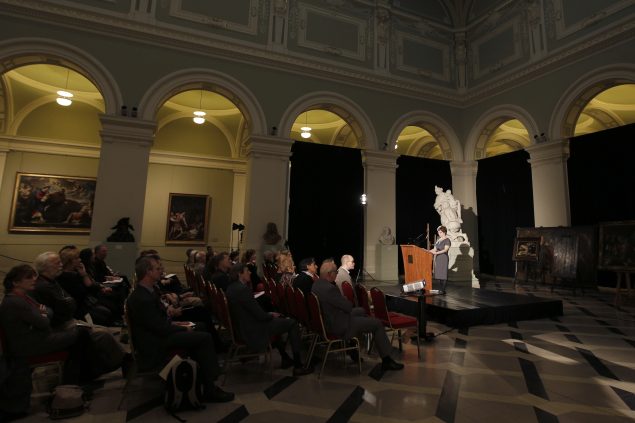 After the introductory talks we looked at the exhibition for two hours before a dinner provided by the museum in one of the main halls. As we left the museum, some of the pleasure of the evening was taken away by the sight of blue flashing lights from the police cordon thrown around Heroes Square to keep away crowds protesting against the proposed imposition of a new tax on internet use (since withdrawn). This subject was addressed on Monday morning in the welcome speech given by the Dutch Ambassador, Gajus Scheltema, who spoke of the need to speak up when “friends and family” do things we cannot agree with, affecting, as in this case, something as important as freedom of speech and information. The Ambassador’s warm welcome was followed by Julia Tátrai’s account of the development of the Dutch and Flemish collections in Budapest, where Julia has been curator of Dutch and Flemish paintings since 1997. Part of the imperial Austrian collections formed by Leopold Wilhelm and sent from Brussels to Vienna in 1657 were in Budapest until they were sold off in the mid-nineteenth century. This dramatic loss was partly compensated for by the acquisition of another huge and important collection, formed mainly in the eighteenth century by the Eszterházy family. Julia showed slides of some of the treasures of the exhibition, focusing on Rembrandt. One intriguing image was a woman’s portrait (inv. no. 316), now given to Willem Drost but in the past attributed variously to Rembrandt and Vermeer. 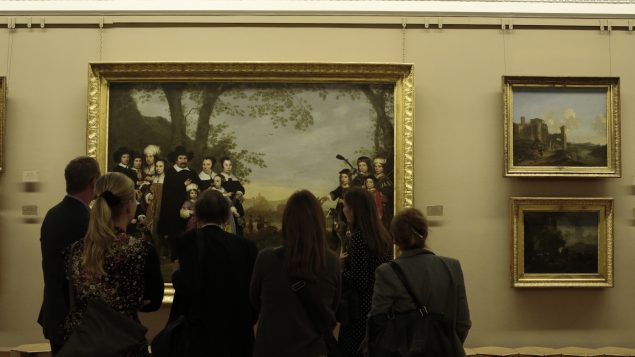 Two lectures followed in the morning section about the impressive (and in some ways surprising) group portrait by Aelbert Cuyp of the Sam Family. This work is in the permanent display of the Szépművészeti Múzeum, not in the exhibition. However, it has been the subject of recent research by chief conservator András Fáy and Rudi Ekkart, for the recent volume on the museum’s Dutch and Flemish Portraits 1600-1800. Fáy showed us “before and after” shots, as well as UV photographs, which reveal that the beautiful and very characteristic landscape – with cattle resting in front of a Rhineland scene bathed in golden light – was inserted as an afterthought. What is unusual about the figures in the background is that they are tasting wine, the business in which the Sam family made its fortune. An x-ray showed the once-visible wine casks that are now covered by the landscape. Rudi Ekkart went on to tell us about Cuyp, whose early work includes portraits. He assigns the Sam Family to ca. 1653, one year or so after the death of Cuyp’s father, Jacob Gerritsz Cuyp, who was a leading portrait painter. The questions at the end centered mainly on the interpretation of details in the painting, such as the girl in the blue and yellow dress who points across the gap to her brothers at the right. The Ambassador asked about the rules governing the export of artworks from Hungary and we learned that the law protects registered works of art. 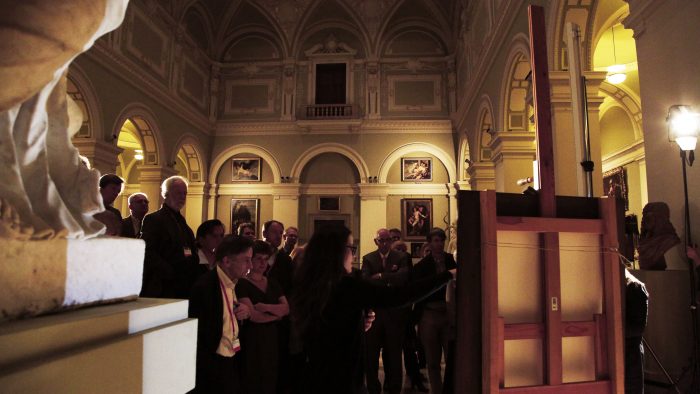 Dominique Surh, curator at The Leiden Collection, talking about the Artist in his Studio, which was called “Circle of Rembrandt, possibly Gerrit Dou” before the discussion but is now said to be:
Gerrit Dou (1613-1675), Self-Portrait at an Easel, ca. 1630
The Leiden Collection
Photo made by Johanna Rieger

After lunch, Christiaan Vogelaar, Curator of Old Master Paintings at Museum De Lakenhal, spoke about one of the paintings in the exhibition, The Parable of the Buried Treasure, formerly attributed to Rembrandt and Gerrit Dou, his first pupil. Their relationship became the focus of the afternoon. Christiaan gave an excellent, measured attribution of this fine painting, showing that Dou sometimes worked with Govert Flinck, a fact recorded in an inventory of 1669. We saw details of landscapes by Flinck and a tronie of a man, which compared convincingly with the landscape and the head of the figure in the Budapest painting. His conclusion, that the painting “may be by Flinck and Dou,” was an interesting prelude to the section on problematical research issues (led by Rudi Ekkart), because one of the Budapest pictures brought out for study, Man in Armour, is possibly by Dou. It was much appreciated that the Leiden Gallery had brought to Budapest their painting of an Artist in his Studio, so that it could be compared with the Budapest Man in Armour. (Neither work is signed.) The still life in the Man in Armor has, interestingly, a round shield which Rembrandt also used in his well-known early History Piece. Christiaan Vogelaar and Tico Seifert, Senior Curator of Northern European Art at the Scottish National Gallery, gave us their views of these paintings, based on their respective knowledge of Dou. Not all of the works assessed by the group came as close as these two did to obtaining an agreed attribution. Edwin Buijsen, Head of Collections at the Mauritshuis, gave an introduction to a work by Van der Venne, the date of which is in question: is it 1625 or 1628? Other works included a family portrait formerly given to Thomas de Keyser, with troubling perspective possibly indicating that it functioned like one of Hoogstraten’s doorway trompe l’oeils. We examined a Calling of Matthew from the circle of Terbruggen, a mannerist work portraying the discovery of Callisto’s pregnancy, but these “remained as mysterious as before,” to use Ekkart’s words. Even more challenging was a beautifully painted still life of vegetables and a pot, which is no longer regarded as the work of Jan Fyt and which Bob Haboldt believes to be German – he once had a painting by the same hand. 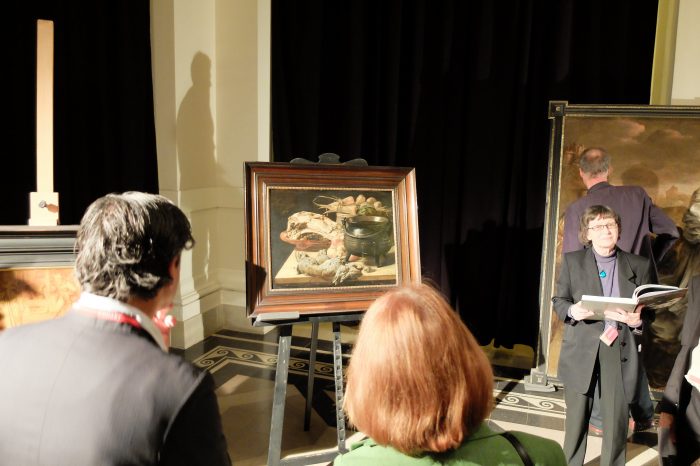 Ildikó Ember in front of the still-life painting that was discussed. It is no longer regarded as the work of Jan Fyt. 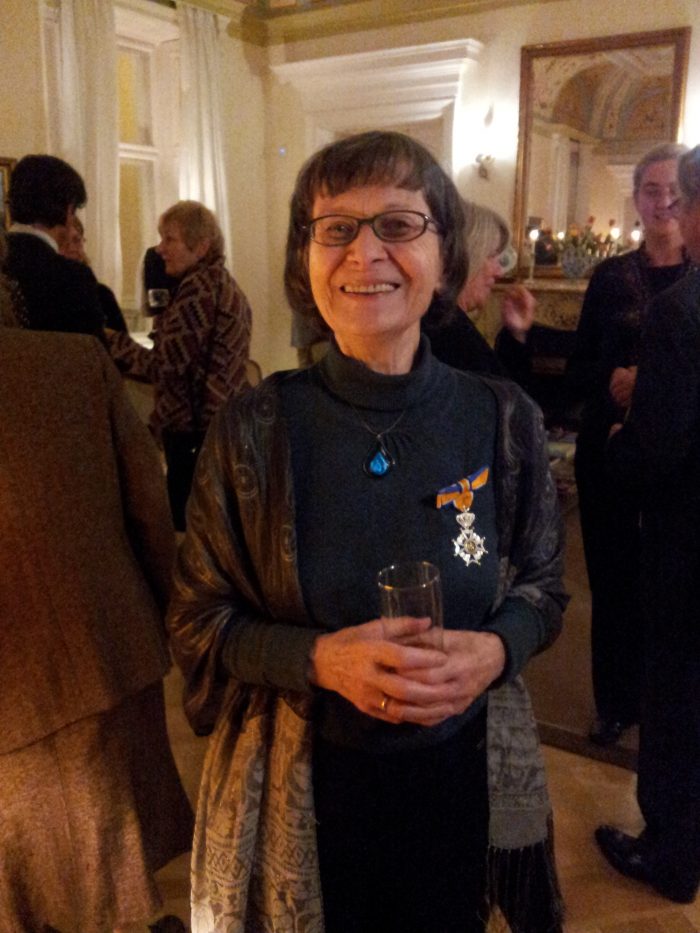 Ildikó Ember, Knight in the Order of Orange-Nassau

The day at the museum ended with another chance to see the exhibition or view the permanent display of Dutch paintings with Ildikó. We were then taken by bus to the Ambassador’s residence, where Gajus Scheltema again addressed us. The highlight of his speech was the announcement that Ildikó had been awarded the “Ridder in de Orde van Oranje-Nassau” for her services to Dutch culture, which provided this Focus meeting with a delightful climax.

Peter Black, Curator of Dutch and Flemish Paintings and Prints at the Hunterian Museum and Art Gallery in Glasgow, has been a member of CODART since 2002.

CODART thanks the Szépművészeti Múzeum, the Royal Netherlands Embassy in Budapest and the Friends of CODART Foundation for supporting this CODARTfocus meeting.

The introduction to the exhibition, which Ildikó Ember gave on Sunday 26 October, is now available online: On the genesis of the show Rembrandt and the Dutch Golden Age in Budapest. Júlia Tátrai’s lecture, which she gave on Monday 27 October, on The History of the Dutch and Flemish Art Collection of the Szépművészeti Múzeum can also be accessed.

A video of the Szépművészeti Múzeum on the Rembrandt exhibition and CODARTfocus in Budapest is now online visible (in Hungarian and partly in English, made by Johanna Rieger).