Jane Turner received her undergraduate degree in art history at Smith College. After an internship at the Cooper Hewitt Museum, she was asked to join the curatorial team at the Morgan Library & Museum, New York, in 1978. She worked there until 1984, while pursuing her PhD at the Institute of Fine Arts, New York University, with Egbert Haverkamp-Begemann in her spare time. Between 1985 and 2001 she edited an astounding 31,600 pages while working at Macmillan Publishers in London as the Editor-in-Chief of the monumental 34-volume Dictionary of Art. In 2011, she took up her current position of Head of the Rijksprentenkabinet in Amsterdam, a position she holds next to that of Editor of Master Drawings. Turner is the author of various articles, collection catalogues (most notably the 2006 catalogue of Dutch drawings at the Morgan) and exhibition catalogues. In July 2014, the two-volume collection catalogue of Dutch and Flemish drawings of the Victoria and Albert Museum (V&A) appeared, which Turner co-authored with Sir Christopher White. 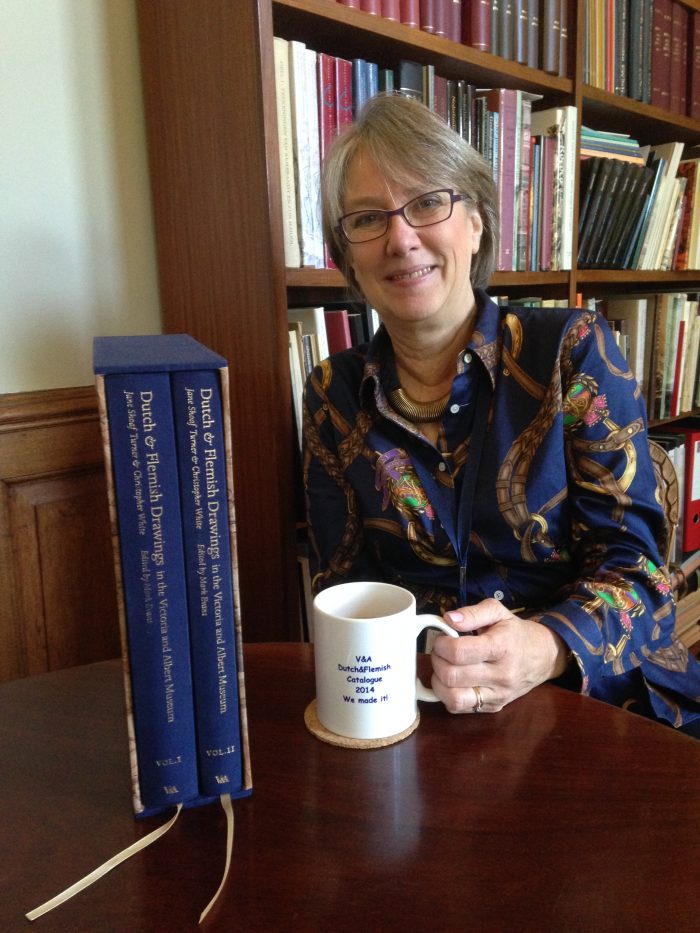 Jane Turner in her office at the Amsterdam Rijksprentenkabinet, with the brand new V&A catalogue of Dutch and Flemish drawings

For this eZine issue devoted to Prints and Drawings, Jane Turner was interviewed by Ilona van Tuinen, Assistant Curator at the Fondation Custodia in Paris.

Congratulations on the publication of the beautiful catalogue of Dutch and Flemish drawings of the Victoria and Albert Museum. These drawings are relatively unknown, even among art historians. Could you tell us about this collection and the organization of the catalogue?

The catalogue has entries on 442 Dutch and 158 Flemish drawings from the fifteenth to the nineteenth centuries, as well as 62 drawings by anonymous artists. The core of the V&A’s collection is formed by several major bequests, the most important being the 1869 bequest of the Rev. Alexander Dyce, which constitutes about a quarter of the collection today. This group includes wonderful drawings such as Rembrandt’s Study of the Actor Willem Ruyter, a gorgeous drawing by his gifted student Carel Fabritius, and an important group of drawings by Rubens.

What were some of the challenges you faced when you started working on the catalogue?

At the V&A, the drawings are stored by date of acquisition rather than by school. That’s not a problem for the larger bequests (where the drawings are subdivided by school and alphabetically by artist), but otherwise a given box might contain Dutch drawings mixed in among Italian sheets and a handful of British watercolors. Because it was impossible to go through all the boxes of 20,000 drawings, we can never be sure that we got all the Netherlandish drawings. Long before I joined the project, a student assistant had compiled a list by combing through the acquisition register, but names that did not look Dutch or Flemish, like Anton Mauve, were excluded. One of the first things that Christopher and I did after I joined the project in 2004 was to update and refine the list of artists. 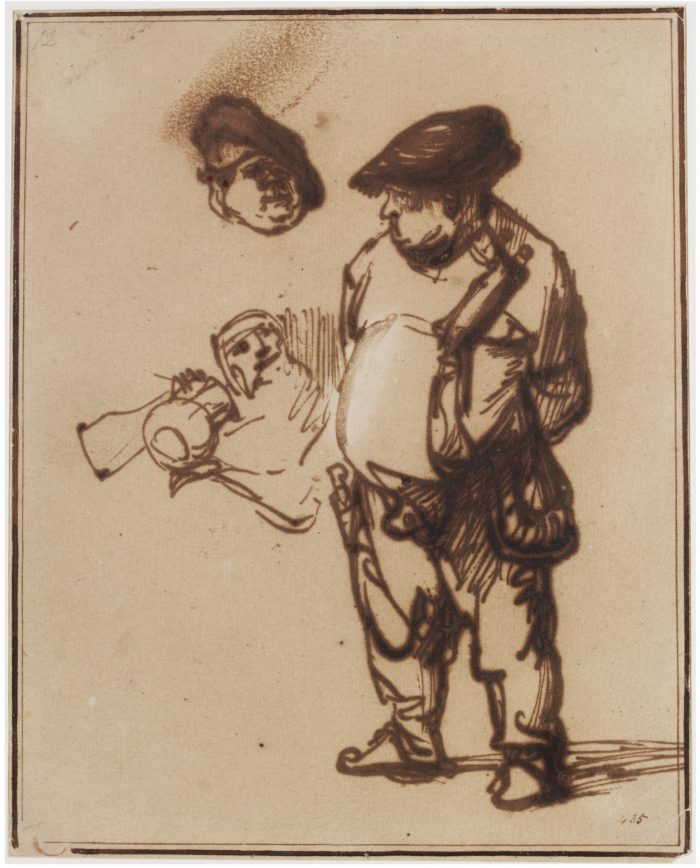 Rembrandt van Rijn (1606-1669), Study of the Actor Willem Ruyter as a Countryman, with Alternative Study of his Head, and a Bust-length Study of a Figure (C.Q. Kan?) Holding a Jug,
Victoria and Albert Museum, London, inv. no. Dyce.435

During the last CODART congresses, a recurring topic was the increasing number of online collection catalogues. What do you think of this development? Was it a conscious decision to publish this catalogue as a book?

The V&A took the decision early on to make it a printed catalogue, and they are very proud of that. I think it takes a great deal of courage to publish a collection catalogue in print and I fully support it. I recently gave two talks on this topic. I took as an example Martin Royalton-Kisch’s 2009 British Museum online collection catalogue of drawings by Rembrandt and his School. Under ‘all objects’ on the opening screen, it’s possible to click through all 392 images. (This is already an advantage over some online catalogues.) I asked the audience whether anyone had actually done this. Not a single person had, not even myself. The British Museum catalogue is incredibly thorough—fantastic when you know what you are looking for, less practical if you don’t.

At the launch of the V&A catalogue I described the difference between an online and printed catalogue, using the analogy of the function of a dictionary and a thesaurus. You consult a dictionary for the correct spelling or meaning of a specific word you have in mind; a thesaurus is more like a journey of discovery, when you’re unsure what you’re looking for. The serendipity factor—which is so important for our profession—you get only from a printed catalogue. There is no other way of replicating that experience.

I believe there are two contexts with strong arguments for doing a printed collection catalogue. One is for lesser-known collections such as the V&A, where you simply don’t expect to find that many or that quality of drawings. Few people would think to look there for Poelenburgh, who is represented in the V&A by three magnificent grey-wash drawings. Being able to quickly flip through a group of images is still a key way in which we do our job. The second context is a reference collection, like that of the Rijksprentenkabinet, where we have one of the most representative and fullest selections of Dutch drawings in the world. It is important to have these reference works on the shelf to consult.

That being said, I’m a great supporter of the online medium. Both the Rijksmuseum and the V&A are planning to put all the basic material online, before or after the printed catalogue, to reflect the updated attributions and dating. I think this hybrid solution is the best, because it caters to both kinds of research needs. 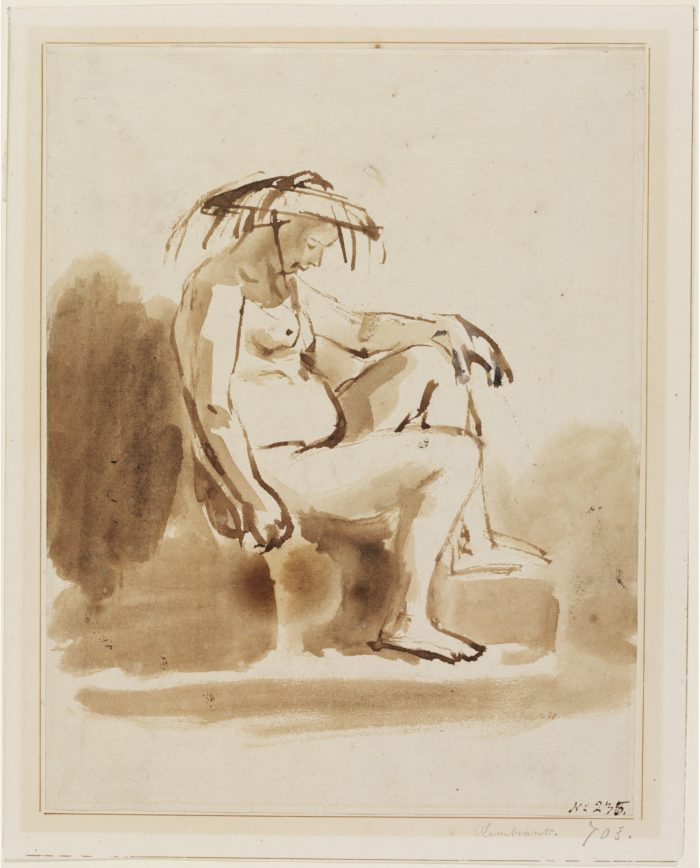 What was your favorite discovery while working on the V&A catalogue?

I’ll tell you my favorite funny discovery, which ties in with our discussion of online catalogues. On the list that Christopher and I had, under anonymous Dutch or Flemish, there was a drawing of two sheep, one of which is urinating. Although the drawing bears an inscription “Giovanni Battista Foggini fecit”, the Foggini scholars I consulted did not think it was by this Italian artist. For most of the project, this drawing languished in our anonymous section. One day, I don’t know what prompted me to do this, I typed “pissing sheep” into Google images, and there on the top row of hits was an etching with exactly the same composition. The image came from the website of a sheep farmer and had no caption, but at least I knew that the drawing was a copy after this print. In the summer of 2011, exactly as I was packing up and moving to the Netherlands, the Rijksmuseum uploaded 100,000 images of prints and drawings for the first big launch of PK Online. As soon as I put “pissend schaap” into the new search engine, I found that the original print was in fact by Nicolaes Berchem. This story illustrates the usefulness of having images and basic data online.

What are you working on at the Rijksprentenkabinet at the moment? 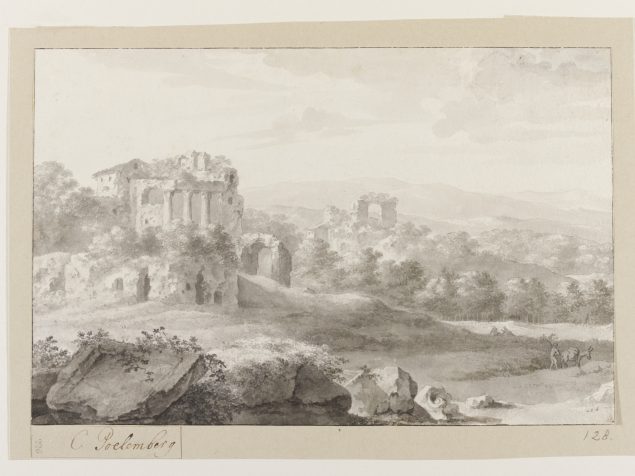 Apart from your high-profile job at the Rijksprentenkabinet, you are also the Editor of the quarterly journal Master Drawings, for which you edit, design and lay out, as well as translate articles from Italian, French, and Dutch into English. How do you manage to combine two such demanding positions?

I’m extremely fortunate that the Rijksmuseum fully supports my work for Master Drawings, which involves my having to go to New York four times a year, and the proofreading is shared with a great Editorial Board. That the Netherlands offers the possibility of a four-day work week is also crucial. Especially now with the work on the V&A catalogue out of the way, I can comfortably divide my time between these two positions. Ultimately the different jobs I’ve had in the past, often simultaneously, have prepared me well. It is by now entirely intuitive that I pull out an article to edit while waiting to board a plane, or whenever I have half an hour to spare. 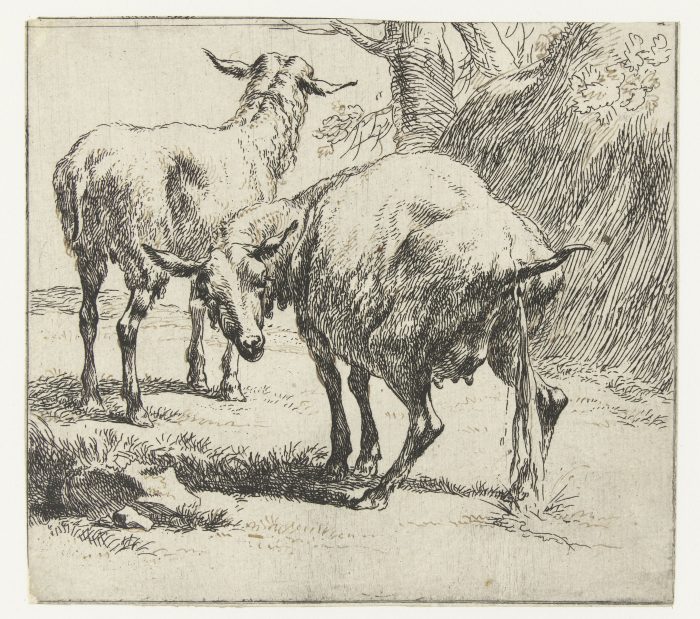 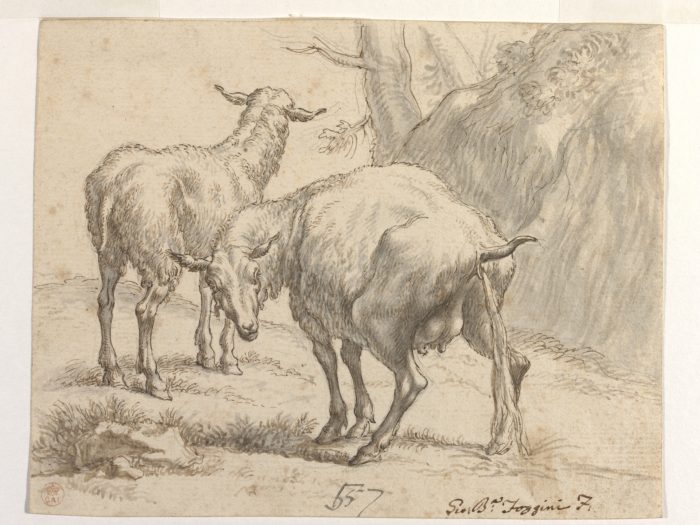 When you took up your current position of Head of the Rijksprentenkabinet in 2011, it meant working in a museum for the first time since you left the Morgan in 1984. How is it to be back?

In a sense, I never fully left the museum world. I kept my toes in all along. I went back and forth to the Morgan while working on their catalogue of Dutch drawings (2006) and their exhibition on the Clement C. Moore Collection (2012). Through my work for Master Drawings I’ve maintained strong connections with curators worldwide. To be fully back, however, is an extreme privilege. My heart flutters, because I realize how very, very much I love this world, the wonderful collection, the colleagues, and being part of it all. It is just fabulous to be here.