The theme of the recent CODART congress ‘Back to Berlin – and what it means to be a curator today’ rang a bell with me – a loud and personal one – so I am grateful for the chance to offer some thoughts on the subject. 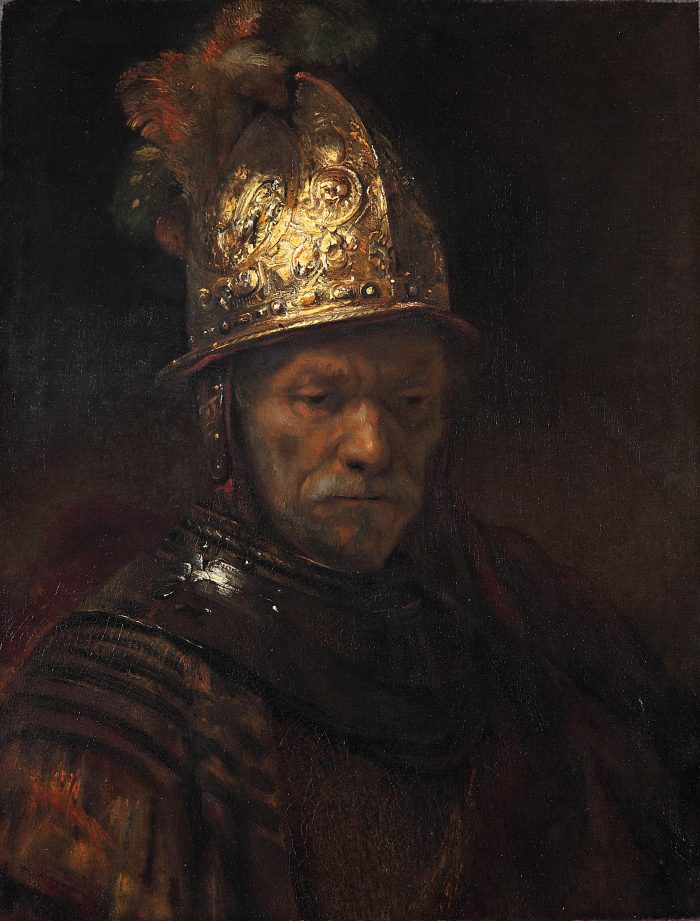 Circle of Rembrandt, The Man with the Golden Helmet, oil on canvas, 67.5 x 50.7 cm, acquired by the Kaiser-Friedrich-Museums-Verein, 1897,
Staatliche Museen zu Berlin
Purchased by the great connoisseur Wilhelm von Bode and long popularly regarded as the greatest Dutch painting in Berlin, this brooding masterpiece was de-attributed by the Rembrandt Research Project in 1985.

This requires a biographical aside. I first visited the still divided Berlin in 1978, about the same time that I began work as a curator. As I have returned every year, the city and its museums have since provided a point of reference throughout my personal and professional life.

It seems to me that Berlin is the definitive museum city; for three reasons:

The story of the last of these subjects is superbly told in The Ghosts of Berlin: Confronting German History in the Urban Landscape by Brian Ladd. His haunting tale of memory, oblivion and remembrance chimes with my favorite kind of creative writing: works that intertwine personal reflections with a historical narrative. I am thinking, for example, of Anthony Powell’s A Dance to the Music of Time, Günther Grass’s On Stasis in Progress and W.G. Sebald’s As the Snow on the Alps. However, art history (as opposed to criticism) requires the renunciation of such literary self-identification.

Michael Ann Holly has perceptively argued that art history is essentially melancholic in its quest to vicariously reunite the material object with its lost past, and to reconcile writing with looking. As an exemplary exponent she cites the sometime V&A curator Michael Baxandall, who confided long ago to my younger self that he thought museum work ‘more wholesome’ than academic life. In his autobiographical fragment Episodes: a Memorybook Baxandall later attributed his decision to leave the V&A to his lack of ‘a retentive and ordered visual memory’, dislike of its ‘institutional quality of life’ and disinclination to follow his father and grandfather as a ‘third generation museum custodian’. I guess he felt it was self-indulgent to opt out for the Warburg Institute and Berkeley.

The picture Baxandall paints of life at a British national museum in 1961-65 differs little from that I remember from the late 1970s: mornings of correspondence and tasks such as label-writing, and afternoons theoretically reserved for research on the collection. By my time exhibitions were beginning to attain their present pre-eminent role. The introduction of a national lottery in 1994 ushered in an all-too-brief decade when it was possible to make major acquisitions more frequently. A big change was signaled in 1998 when prime minister Tony Blair invited curators to 10 Downing Street to advise us that museums were ‘agents of social inclusion’: a mantra with which John Ruskin and Prince Albert would surely have agreed. This encouraged the digitization of collections for the internet, in the UK notably through the website Art UK which now has over 220,000 paintings in public ownership online. Many curators will have similar recollections.

The Berlin(s) I knew in the 70s remained a barometer of the Cold War, with much of the Museum Island still in ruins and most of the old masters consigned to the leafy western suburb of Dahlem. Visitors were few, encouraging the illusion that these extraordinary works of art were laid out exclusively for one’s personal benefit. In the West, the arts were heavily subsidized. For example, in 1982 the city contributed around 1.4 million Deutschmarks and a resonant venue – the former Kunstgewerbemuseum (1881; now Martin Gropius Bau), two meters from the Berlin Wall and adjacent to the former headquarters of the Gestapo – for the groundbreaking Zeitgeist exhibition which repositioned figurative painting as a bridge between past and future. The reunification of Germany in 1990 consigned that Berlin to history, but its lingering memory feels more actual to me than today’s squeaky-clean shopping malls. 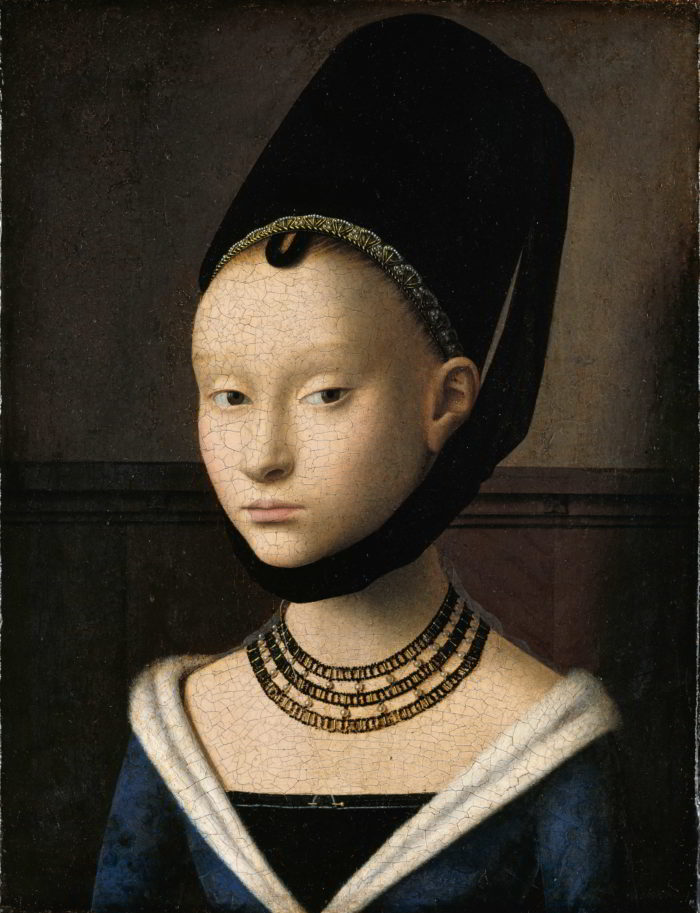 There have, of course, been many Berlins, and the recent CODART congress spanned several. This began with a visit to the hunting lodge of the electors of Brandenburg: Jagdschloss Grunewald, erected in 1542 for Joachim II in the ‘grünen Wald’ at the end of the future Kurfürstendamm, 10 kilometers to the west of the Berliner Schloss.  Its principal display is of paintings from the Cranach workshop. The finest is the earliest version of Lucas Cranach the elder’s Nymph of the Fountain. Nine Passion scenes survive from the altarpieces in the Stiftskirche, formerly beside the Schloss, which housed the four Exemplum panels, oddly combining subjects from the Old Testament with classical myth and ancient history.

An alternative tour was to the opulent picture gallery at Schloss Sanssouci in Potsdam, built for Frederick the Great in 1755-64, and praised by the sculptor J.G. Shadow in 1835 as ‘the most magnificent gallery in Europe’. Its formal double-hang is mostly of seventeenth-century religious and history paintings: the west wing and central building

devoted to Rubens, Van Dyck and the Netherlandish school and the east wing mostly to copies after canonical Italian masters. This excursion coincided with a visit to an architectural copy of a copy: the Museum Barberini, a recently-built exhibition space which is a replica of a late eighteenth century building destroyed in 1945; itself based on the seventeenth-century Palazzo Barberini in Rome.

The beginning of the Berlin museums occurred when the English timber merchant Edward Solly sold the Prussian state over 3,000 paintings, including many Italian primitives and the wings of the Ghent Altarpiece. These were housed in Schinkel’s Altes Museum (1830), the first building on the Museum Island. There followed F.A. Stüler’s Neues Museum (1855; destroyed in 1945) and Alte Nationalgalerie (1876), the former Kaiser-Friederich Museum (1904; now Bode Museum), and the Pergamon Museum (1930). Their Cold War nemesis was the modernist Kulturforum built between 1968-1998, just 3 kilometers but another political world away, in former West Berlin. Reunification saw the Museum Island rejuvenated, rather spookily in David Chipperfield’s thrilling rebuild of the Neues Museum (2009), which preserves the memory of the formerly ruined building. 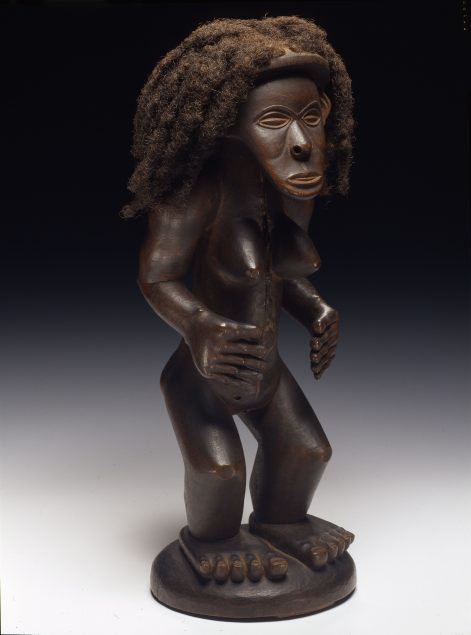 At the CODART congress Johannes Rößler gave a lecture highlighting the achievement of Hegel’s student H.G. Hotho, who had a tense relationship with his superior G.F. Waagen, first director of the Berlin Museums. Waagen’s Treasures of Art in Great Britain (1854 and 1857) provided a shopping list for his successor Wilhelm von Bode, the subject of Julien Chapuis’s talk on ‘Bode and America’. Just as the German university system provided a template for academic art history in the USA, so Bode’s method – perpetuated by his assistant Wilhelm Valentiner at the Detroit Institute of Arts – provided an influential model for American museums in the twentieth century. Chantal Eschenfelder’s talk showed how the Städel art museum in Frankfurt, founded in 1817, has built on its impressive series of collection catalogues initiated by Jochen Sander’s volume on the Early Netherlandish pictures (1993) to provide digital outreach beyond its walls; in the spirit of André Malraux’s Musée Imaginaire (1947).

However, emphasis on the technological aspect of Malreaux’s prophetic work tends to obscure its principal argument, on the necessity for dialogue between disparate cultures: a subject amplified by his future son-in-law Alain Resnais’s brooding documentary Les statues meurent aussi (1953) which excoriates colonialism’s corruption of African art into a ‘commodity fetish’. This challenge is brilliantly addressed by the exhibition Beyond Compare: Art from Africa in the Bode Museum, organized by Chapuis, Jonathan Fine and Paola Ivanov. The show confronts superb African sculptures from the Ethnologisches Museum (1886; demolished 1961) with spectacular Medieval and Renaissance works from the Bode Museum’s pre-eminent holdings. Reciprocal light is shed by thematic or formal analogies demonstrating, for example, the central significance of female hair common to the feisty Chokwe figure of a woman of rank, acquired in 1886, as well as the stately Dangolsheim Madonna by Nikolaus Geerhaert van Leyden, carved around 1460-65. 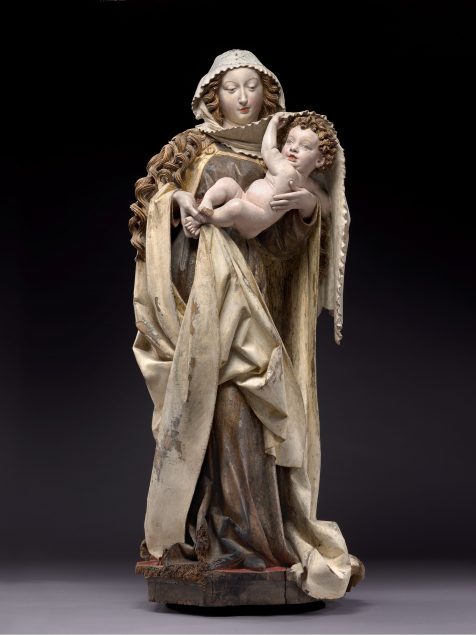 Participants in CODART 22 are deeply obliged to the organizers and speakers for providing such a rich and inspiring program of visits and talks, of which I have been able to highlight only a few here.

During the congress the massive Berliner Schloss, demolished by the East German authorities in 1950 and reconstructed since 2013, loomed over the Museum Island like a cloned mammoth. It is much to be hoped this future site of Berlin’s non-European collections will embody the thoughtful comparative method of the current intervention in the Bode Museum.

Mark Evans is Senior Curator of Paintings, Victoria and Albert Museum in London, United Kingdom. He has been a member of CODART since 2001.