This article was originally published in the CODART eZine, no. 4 Summer 2014.

The unique collection of Flemish Primitives – including first-rate works by Jan van Eyck (1390/1400-1441), Hugo van der Goes (ca. 1440-1481) and Hans Memling (ca. 1433-1494) – is often the first thing people associate with the Groeningemuseum. In recent years, however, the museum has been focusing more and more on its important and exceptional holdings of neoclassicist artworks. It started with the 2007 exhibition Bruges – Paris – Rome: Joseph-Benoît Suvée and neo-classicism in Europe. The exhibition catalogue showcases, in addition to the painted oeuvre of a few neoclassicist figureheads of Bruges, some sixty drawings from the Bruges Printroom. It is an auspicious introduction to a surprisingly large collection which contains quite a few treasures waiting to be discovered.

The neoclassicist collection of the Groeningemuseum owes its existence to the Bruges Academy, which was founded at the beginning of the eighteenth century. From the 1750s on, the Academy played a pioneering role in promoting neoclassicism in the Southern Netherlands. This art movement, which began in France, championed a return to the ideals of beauty of Greek and Roman antiquity. Between 1750 and 1830 a remarkable number of students went abroad after completing their training at the Academy. Their main destinations were Paris and Rome, the artistic centers of this new movement. Among them were Joseph Benoît Suvée (1743-1807), Josef Karel De Meulemeester (1774-1836), Joseph Ducq (1762-1829), Joseph Denis Odevaere (1775-1830), Franciscus Josephus Kinsoen (1771-1839), Jan Frans Legillon (1739-1797), Albert Gregorius (1774-1853) and Jan-Robert Calloigne (1775-1830) – each and every one an artist whose oeuvre belongs to the European Neoclassicism movement. Thanks to donations from former pupils and benefactors, as well as purchases made by the museum itself, the Groeningemuseum boasts extensive holdings of high-quality paintings and drawings by these artists.

Among the collection of drawings are academic studies, sketches, preparatory drawings for paintings, architectural drawings and landscapes. They are not only the work of fully fledged artists, but also the first creations of rising stars at the Bruges Academy. This exceptional body of work lends itself, by virtue of its diversity, to the study of drawing of the neoclassicist school. It is an intriguing collection that has as yet scarcely been studied. Many sheets are still awaiting identification, placement within an artist’s oeuvre, or a correct attribution.

The majority of drawings come from two important donations, one made by the British collector John Steinmetz (1795-1883) and the other by the Bruges Academy itself. A smaller number of sheets were part of the 1865 bequest of the Oudheidkundig Genootschap (Antiquarian Society), which consisted of a collection of objects related to the history of Bruges. The Printroom’s sixty-seven drawings by Jozef Karel De Meulemeester – mainly academic studies made from antique statues and live models – belong to this bequest. 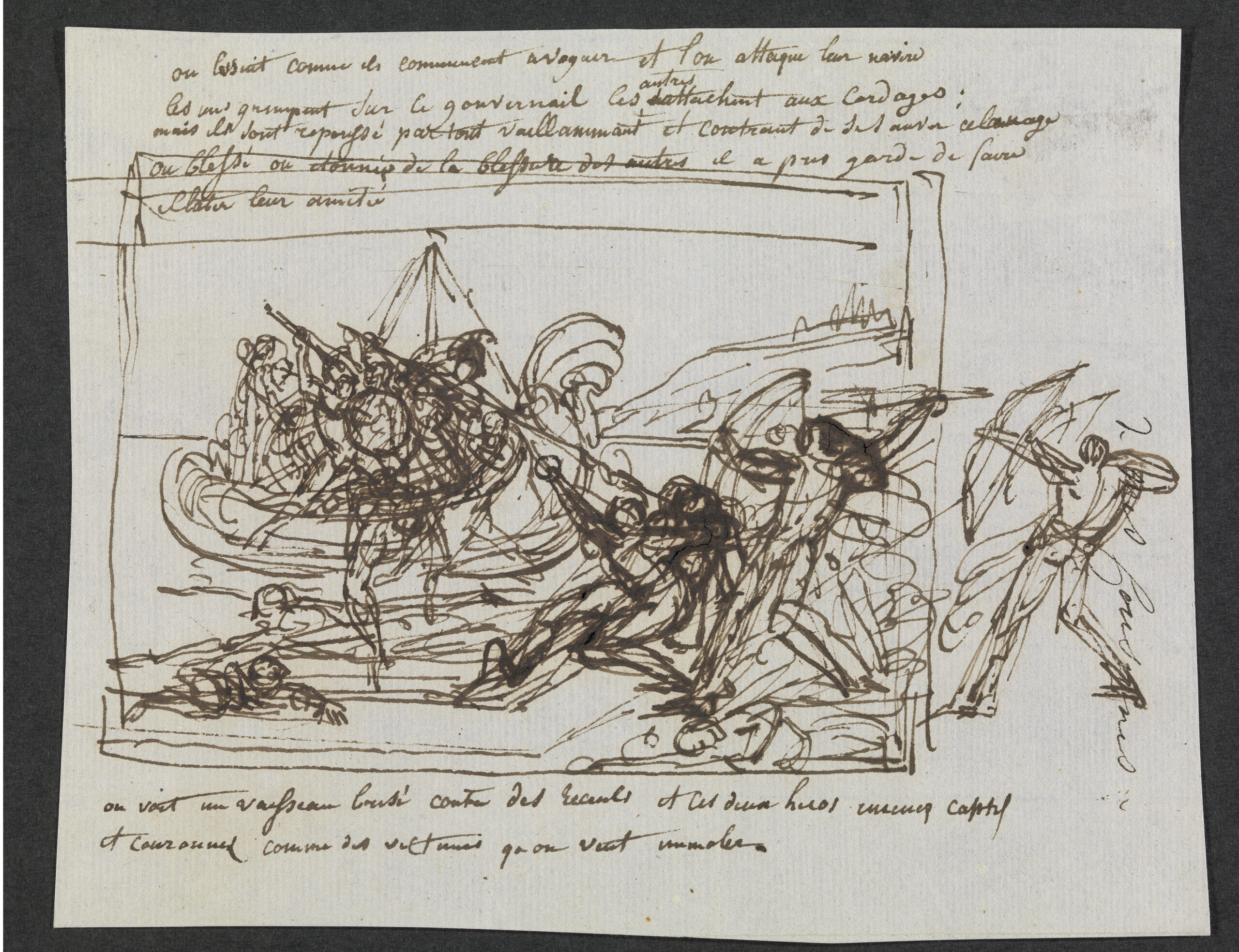 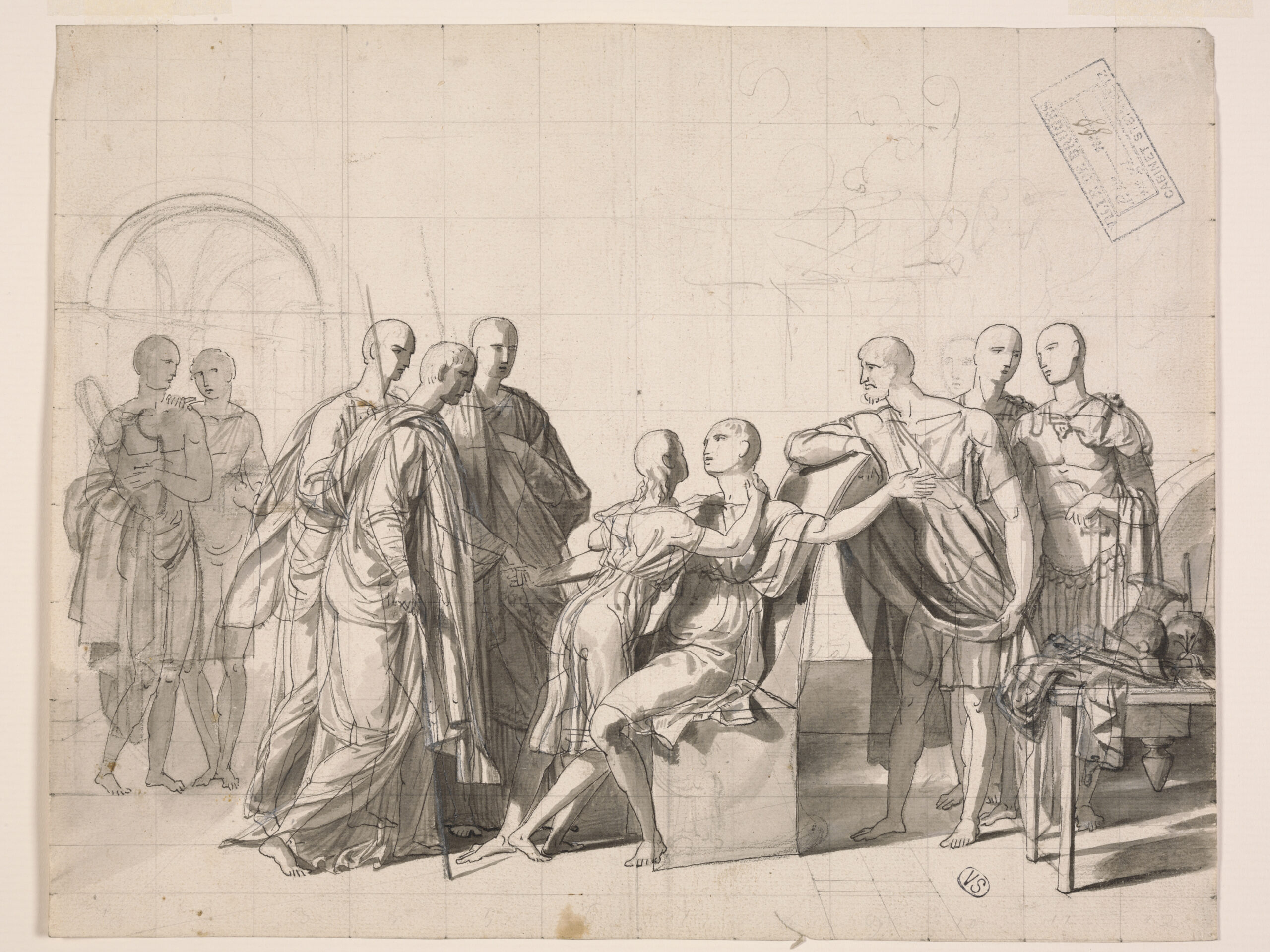 In 1863 John Steinmetz left a collection of around 14,000 prints and 1,000 drawings to the City of Bruges. The collection’s large number of neoclassicist drawings by Bruges artists – some 450 sheets – is striking. More than 350 of these drawings were purchased by Steinmetz at the estate sale of the artist Joseph Ducq. It is the pride of the collection in both quantity and quality. The ensemble shows Ducq to be a surprisingly talented and versatile artist, extremely meticulous in detail studies and portraits, and exceptionally unconstrained and dynamic in his sketches. Examples include the tumultuous compositional fragment displaying the Rape of Helen (?) (fig. 1), and the preparatory drawings for Ducq’s most important paintings, Meleager Dismissing the Entreaties of his Family and The Return of Scipio’s Son (fig. 2). With the latter work the artist tied for second place in the Prix de Rome contest of 1800 with the now-famous Jean-Auguste-Dominique Ingres (1780-1867). His drawings document the various stages of creativity in the genesis of his paintings, ranging from studies of details, figures and drapery to sketchy compositional fragments and elaborate oil sketches. They contain a wealth of information on the artist’s working method and sources of inspiration. 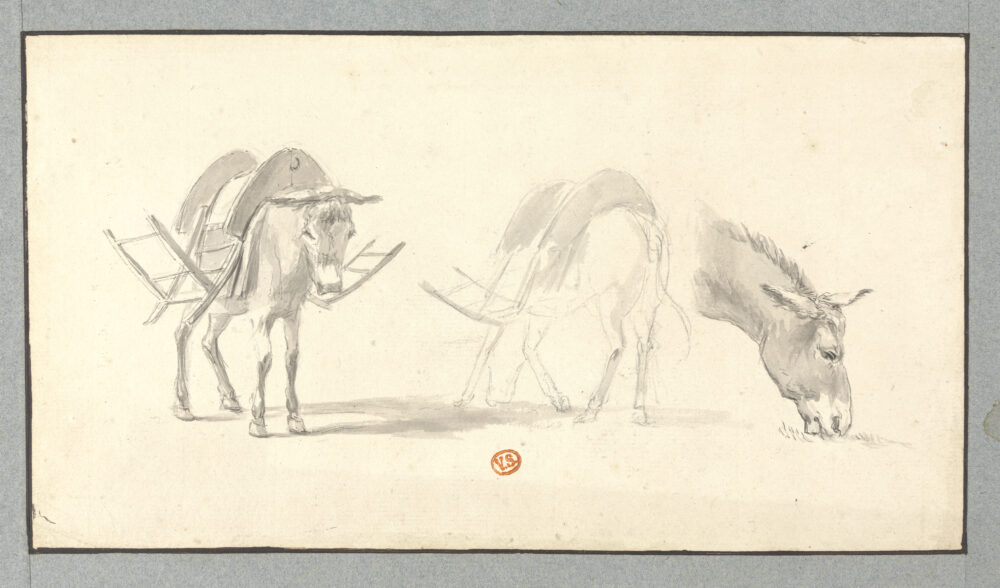 At Ducq’s estate sale Steinmetz possibly also bought some forty drawings by Joseph-Benoît Suvée. This Bruges painter was one of the first to leave Bruges after his training and go to Paris. His success and influence prompted numerous fellow artists from Bruges to follow him to the French capital. In 1771 Suvée won the Prix de Rome, finishing before Jacques-Louis David (1748-1825). This prize enabled him to spend a number of years working in Rome. The Printroom has several academic studies from Suvée’s earliest years at the Paris Academy and some thirty landscapes that he produced during his stay in Italy. They are perfect examples of a neoclassicist landscape, in which faithfulness to nature goes hand in hand with an idyllic, pastoral atmosphere (fig. 3). 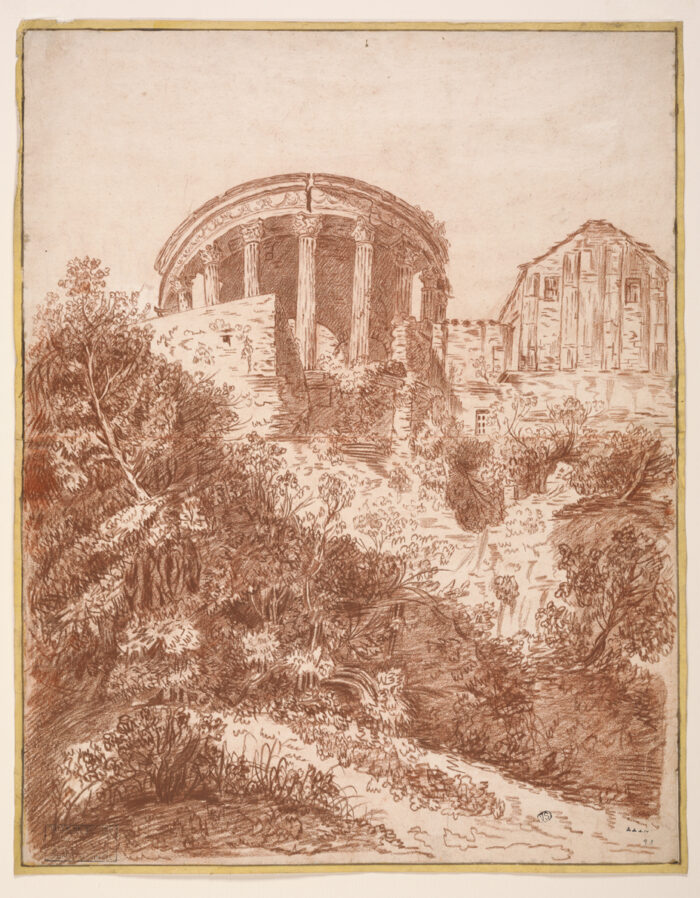 The Bruges Printroom has approximately twenty drawings by Suvée’s good friend and colleague, the landscape and animal painter Jan Frans Legillon. After completing his training at the Bruges Academy, Legillon, too, went to France and Rome. In 1782 he settled in Paris for good. The Bruges biographer Pierre François Ledoulx (1730-1807) relates that after Legillon’s death, Suvée sent two cabinets containing “more than a thousand drawings” to his friend’s family in Bruges. Only a small number of Legillon’s drawings can be located today, however. His landscape studies are less idyllic in character than those of Suvée. They do not depict the ruins of past grandeur; instead, they are simple views of nature and farmsteads. The artist strove, above all, for an extremely precise rendering of nature. His depictions of animals betray a similar commitment to observation and precision (fig. 4).

In addition to ensembles, Steinmetz collected various loose sheets by neoclassicist artists, such as Albert Gregorius, Augustinus van den Berghe, Franciscus Josephus Kinsoen, Bernard Verschoot (1727-1783) and Joseph Denis Odevaere. Steinmetz owned a few of Odevaere’s preparatory drawings for paintings, including one for the lost Raphael Being Presented by Bramante to Pope Julius II. In 1995 the Musea Brugge bought a second, more detailed preparatory drawing for this work (fig. 5). 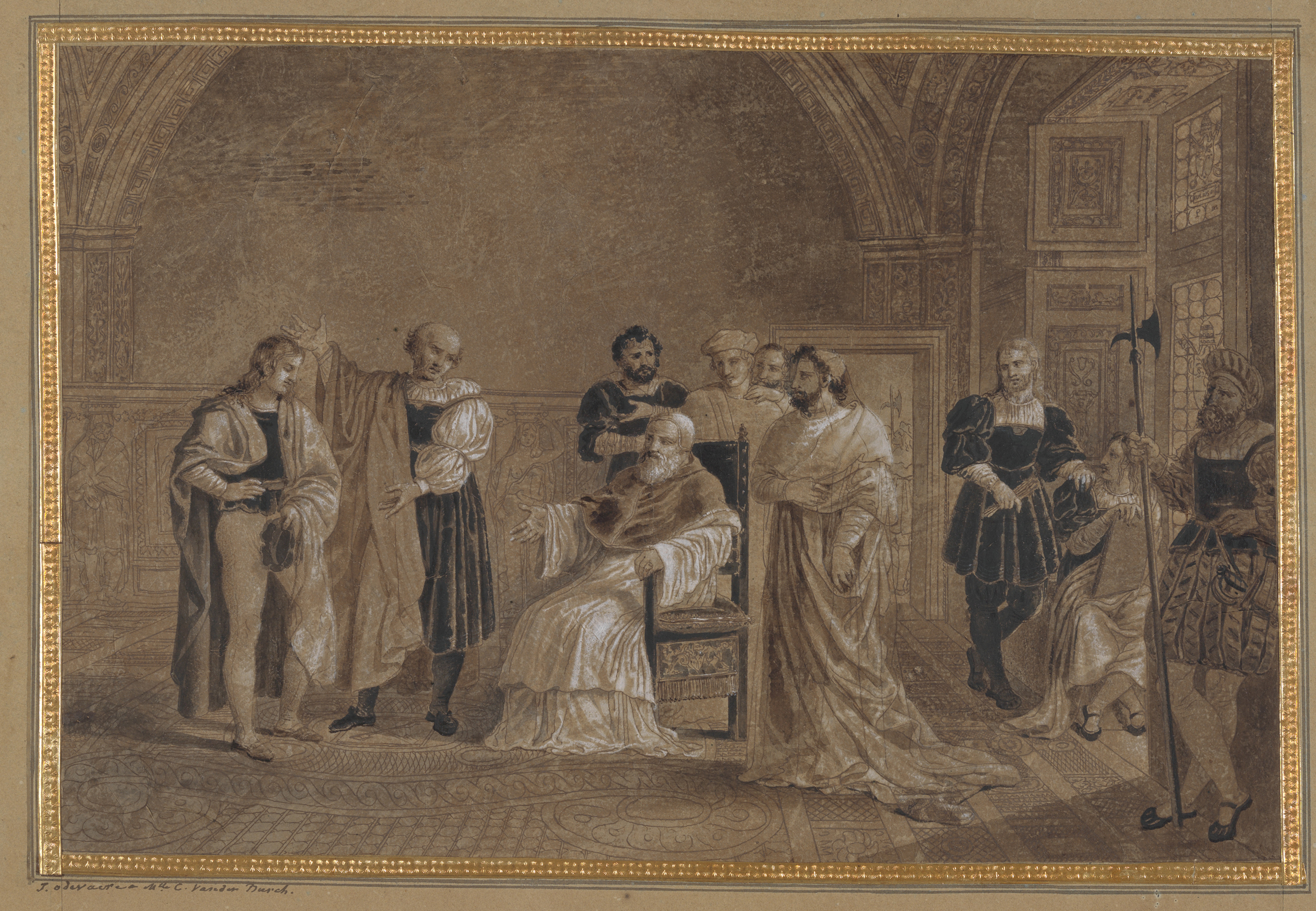 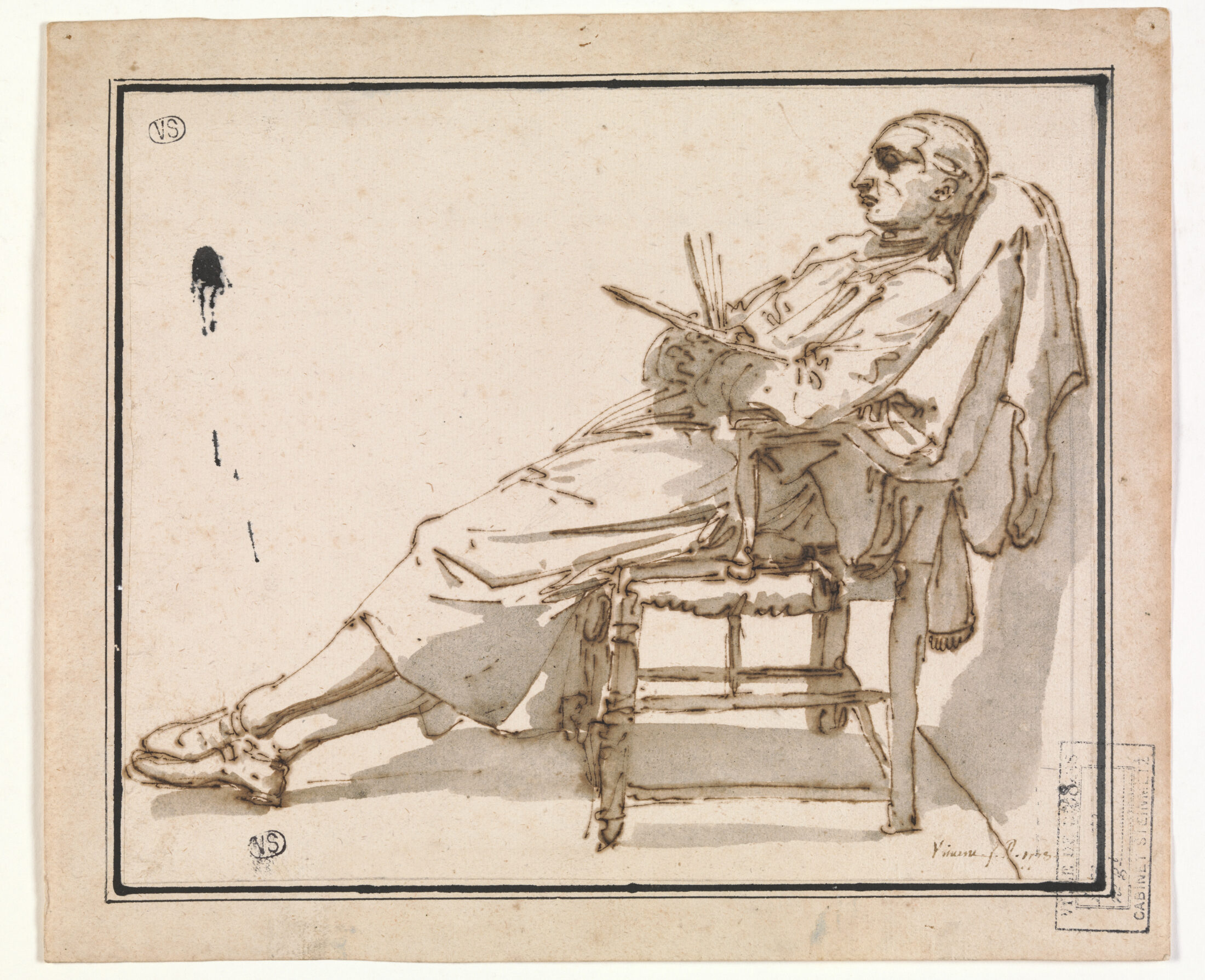 More rarely, Steinmetz also bought French and Italian neoclassicist drawings, including sheets attributed to (or to “the circle of”) Vicenzo Camuccini (1771-1844), Anne-Louis Girodet (1767-1824) and a few unidentified artists. A striking ensemble is a group of drawings that Suvée collected by several French colleagues in Rome, including a typical (still unidentified) artist’s portrait by François-André Vincent (1746-1816) (fig. 6), as well as drawings by Pierre-Charles Jombert (1748/9-after 1777) and François-Guillaume Ménageot (1744-1816) – artists who, like Suvée, had won the Prix de Rome.

In 1840 Joseph-Octave Delepierre (1802-1879) mentioned Steinmetz’s large collection of Bruges masters – which included the work of “Ducq, Suvée and other artists of Bruges” – in his Guide dans Bruges. In a later edition he listed even more names, including those of Suvée’s fellow students in Rome. Apparently this neoclassicist collection was well known in the nineteenth century but later vanished from the public eye.

A large number of the drawings that came directly from the Bruges Academy were produced by students during their course of training. They are mainly “prize drawings,” winners of the biennial contest organized by the Academy, for which the drawings were specially made. All the pupils were allowed to participate, according to their department (visual arts and architecture) and level of education (1st, 2nd or 3rd class). These prize drawings have been almost systematically preserved. They comprise a largely unknown and unresearched ensemble of more than 1,000 drawings, dating from 1755 to the 1960s. The holdings of architectural drawings contain a number of sheets made by students who later became municipal architects of Bruges, such as Emmanuel Speybrouck, Eugenius Goddyn and Jean Rudd (1792-1870). There are not only prize architectural drawings from the Bruges Academy, but also numerous sheets from other contests, such as a Prix de Rome drawing of 1862 by the Bruges architect Louis Delacenserie (1838-1909) and a first-prize drawing of 1812 from the Paris Academy by the important neoclassicist architect Tieleman Suys (1783-1861), court architect to King Willem I and Leopold I. A few rare architectural designs by the painter Joseph Benoît Suvée, namely a ground plan, elevation and façade for a Jesuit Church (fig. 7), can also be found among these drawings. Up to now, only the architectural drawings from the period 1755-1830 have been inventoried. These fine sheets testify to a surprisingly high degree of skill and demonstrate the importance of French neoclassicist examples in instruction, such as the Recueil élémentaire d’architecture by Jean-François de Neufforge (1714-1791). The prize-winning sheets that originated in the visual arts classes also include the early, student-in-training work of important neoclassicist painters and sculptors, such as Joseph Benoît Suvée, Franciscus Josephus Kinsoen, Joseph Denis Odevaere, Karel de Meulemeester, Bernard Duvivier and Pieter Pepers II (1761-1794) (fig. 8). In contrast to the architectural drawings, these holdings have not yet been inventoried. 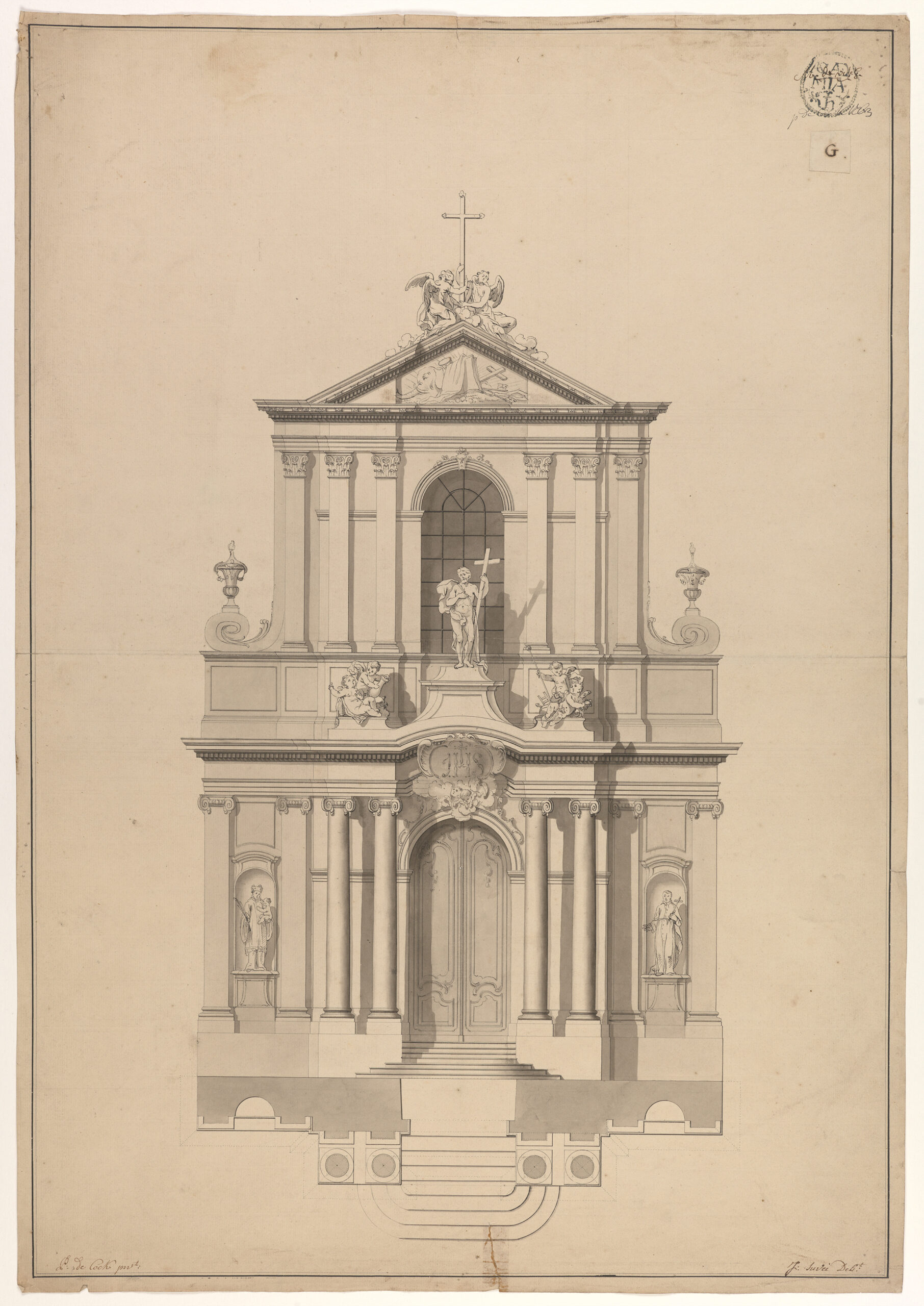 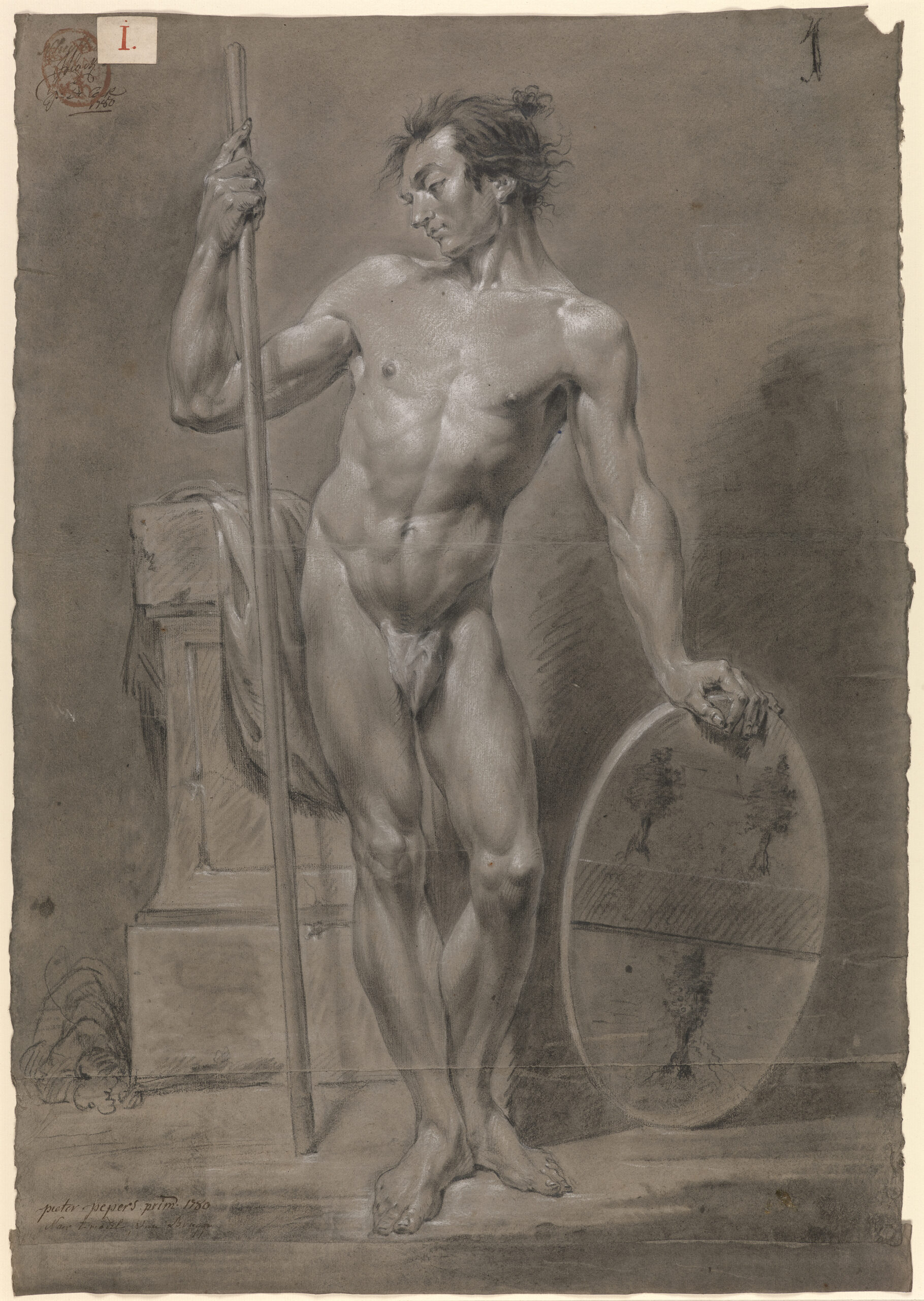 The prize drawings of the Bruges Academy bear extraordinary witness to the talent of these young architects and artists in training. Moreover, they provide insight into the instruction offered at the Bruges Academy, which played an exemplary role in the Southern Netherlands in the eighteenth century. They show the subjects portrayed, the examples used, and the relationship between theory and practice.

The museum continues to expand its neoclassicist collection through purchases and donations. The largest acquisition dates from 1973, when the museum acquired four albums and forty-five loose sheets by the sculptor Jan-Robert Calloigne from the artist’s descendants. This ensemble forms a representative overview of the drawn oeuvre of this artist, who introduced neoclassicism to the sculpture and architecture of Bruges. These drawings, too, are mainly unidentified studies, designs and tracings made on papier calque.

Its current, limited accessibility means that nowadays this fascinating collection can be described only in general terms. On-going research, however, promises new insights into the origin, authorship and function of various works. The museum thus foresees the reassessment and more precise description of this important collection.

Virginie D’haene is Assistant Curator at the Groeningemuseum, Musea Brugge. She has been a member of CODART since 2013.