Jan Wildens (1584/86-1653), The Transformation of Women into Magpies, Ekaterinburg Museum of Fine Arts

The Ekaterinburg Museum of Fine Arts is one of the largest Russian regional museums, and has an extensive collection of western European art, a considerable part of which consists of Dutch and Flemish works. The collection was formed at the beginning of the twentieth century with the foundation of an art history department of the Ural Association of Connoisseurs. During the course of its existence the association had collected various curiosities and works of art, especially paintings. The artistic value of the latter was noted by the famous Russian painter, restorer and art historian Igor Grabar during his visit to Sverdlovsk in the mid-1920s.

The year 1936 saw the foundation of the Sverdlovsk Art Gallery, which inherited the paintings from the Ural Association of Connoisseurs. In addition, many important acquisitions came from major museums in Moscow and St Petersburg. The gallery’s collection increased to such a point that in 1988 it was renamed the Sverdlovsk Museum of Fine Arts. 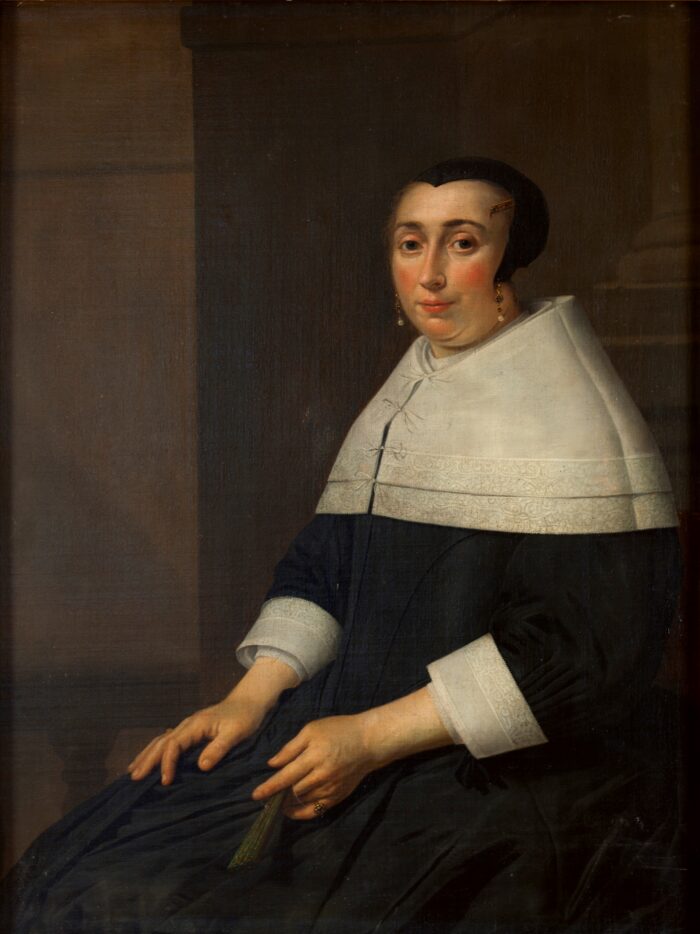 There had always been a historical link between the Museum of Fine Arts in Ekaterinburg and the State Hermitage Museum, and during World War II the collection of the latter was evacuated to the Urals and concealed in the reserves of the Sverdlovsk Art Gallery. In 1947, when those works were returned to St Petersburg, the Hermitage Museum presented the gallery with a number of western European paintings as a token of gratitude. Among them were Dutch pictures like Hendrick van Vliet’s Portrait of an Unknown Woman, Simon de Vlieger’s Storm and Cornelis van Poelenburch’s Bacchanalia.

Van Vliet’s Portrait of an Unknown Woman is one of the highlights of the collection. It is important to mention that it was transferred to the museum as a painting of an unknown Dutch artist, but during restoration it was discovered that it was actually signed and dated by the artist. Although the name of the sitter remains unknown, Hendrick van Vliet stated that it is a portrait of a 32-year-old woman that he painted in 1665. It is typical of his style and shows the influence of the ideals of the period. There is a strong emphasis on the woman’s face and hands, and her black dress and the simple, almost monochrome background are intended to reinforce that effect. The sitter’s features are painted in a masterly way with an attention to detail and a decidedly naturalistic likeness. She is not only a personality but also a representative of a particular social class. Judging by the lace that decorates her dress and the golden jewelry with pearls, this is a woman from quite a wealthy family. 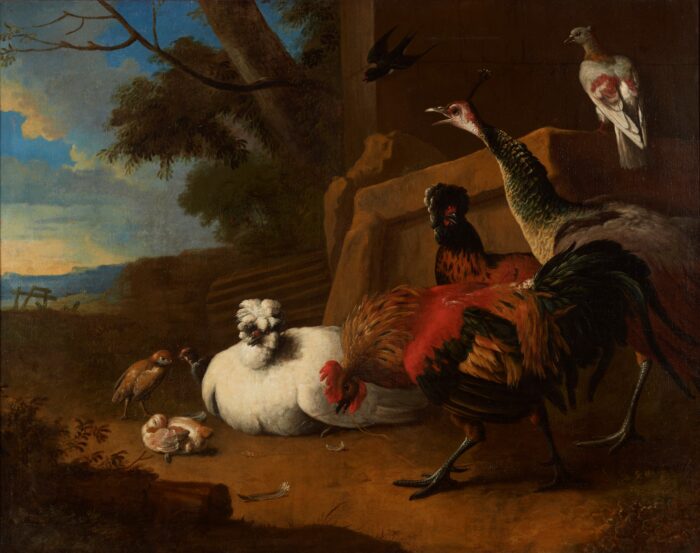 The Poultry Yard by Melchior d’Hondecoeter is a great example of the master’s characteristic works and is a fine illustration of the taste of the period, when many people commissioned such pieces to decorate the interiors of their homes. Although Hondecoeter made many similar paintings of birds, he always adopted an original approach. He hardly ever repeats himself, attempts to capture movement, and paints very lifelike images of his birds, and at the same time is a great master of colour and composition. This piece was one of the valuable acquisitions from the Pushkin Museum of Fine Arts in 1939.

Most of the Flemish paintings were acquired in 1936, when the Sverdlovsk Art Gallery was founded. The provenance of these pieces requires additional and thorough research, but unfortunately most of the traces in the records are likely to have been lost. In the Soviet period a great number of artworks from the private collections of the Russian aristocracy were confiscated and deposited in a so-called National Museum Reserve, from which they were later distributed to various museums all over Russia, including Sverdlovsk. In the course of this complex process the data on the provenance and previous owners, as well as important facts about many of the works, were lost or confused, and as a result it is not always possible to trace them at present. Although this redistribution raised significant problems for provenance research, it also made it possible for smaller museums far away from the central part of Russia to acquire some valuable pieces of art which soon became highlights of their collections. 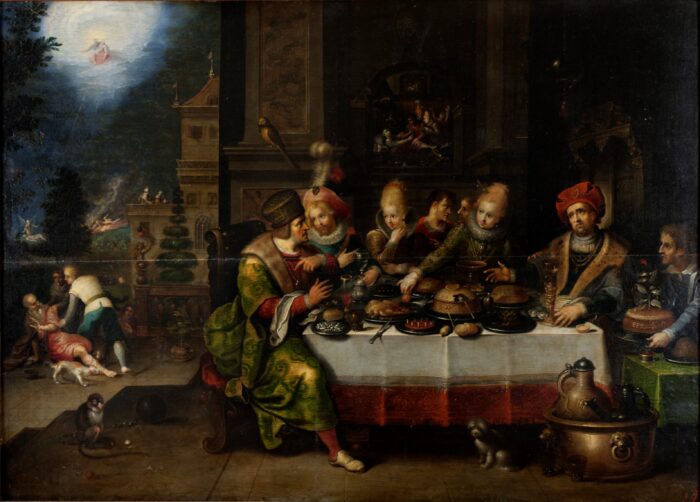 Frans II Francken (1581-1642), Parable of the rich and the poor Lazarus, Ekaterinburg Museum of Fine Art

Among the pieces that shared such a fate is a panel painting by Frans II Francken. His Parable of the Rich Man and Poor Lazarus is enriched with surprisingly refined details and is notable for its perfection of technique. It is very comparable to a panel in the Museum der Brotkultur in Ulm. Leaving aside the difference in sizes, both pieces have many features in common both in their overall composition and in a variety of small details. Like many other paintings by Frans II Francken, it contains a great number of symbols and is remarkable for its combination of several elements from the story in a single composition. The original idea may have come from Frans I Francken and was later developed by his apprentices, the representatives of the younger generation of painters from the large Francken family. While paying considerable attention to the worldly aspects, such as the jewelry and the details of the costumes of the rich feasting at the table, the master remains faithful to the main subject and underlines the importance of being generous, charitable and devoted to God. It gives an idea of the ideals that flourished in Flanders during the period when Francken lived and worked. 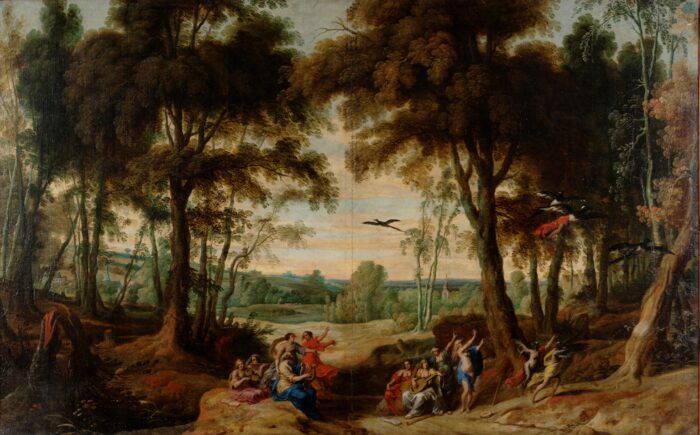 Jan Wildens (1584/86-1653), The Transformation of Women into Magpies, Ekaterinburg Museum of Fine Arts

Another beautiful panel from our collection is supposed to have been painted by an unknown artist from the circle of Bartholomeus Spranger. In 1936 this Virgin and Child with Sts Catherine and Barbara was discovered in a storeroom in the Church of St Simeon and St Anne in the small town of Sysert, 50 kilometres from Ekaterinburg. Considering that the church was decorated in the late Baroque style, the painting might have been a beautiful part of its interior. The Flemish school in the collection of Ekaterinburg Museum of Fine Arts is also represented by Jan Wildens’s Transformation of Women into Magpies and Caspar de Crayer’s Last Judgement. The latter is highly impressive due to its dynamic composition and great variety of facial expressions and depiction of the emotional states of the figures. The Wildens, which is based on the story in Ovid’s Metamorphoses, was split vertically into two by the previous owners, and is now on display thanks to a restoration. Both pieces are important parts of our permanent exhibition and always attract the particular attention of the visitors to the museum. 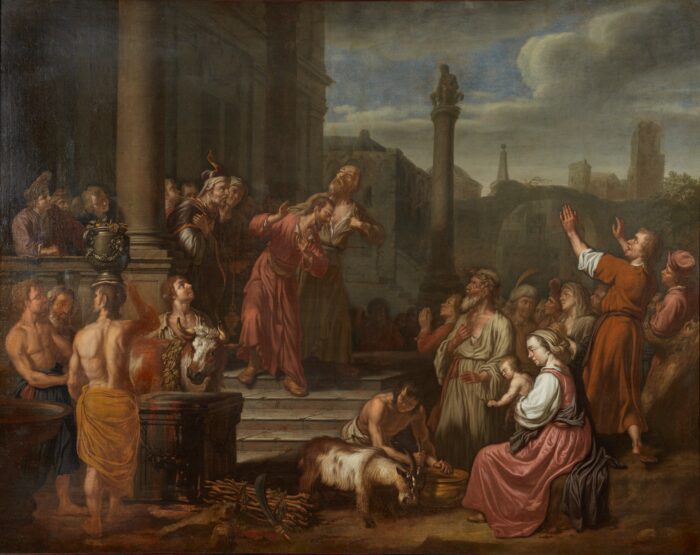 Not only does the Ekaterinburg Museum of Fine Arts possess pieces by famous artists, it also has a number of unique artworks that are exclusive to Ekaterinburg and cannot be found in the collections of other Russian museums. For instance, a painting of Paul and Barnabas in Lystra is the only piece by the Dutch monogrammist PLP in a Russian museum. Scholars believe that the artist was a Rembrandt pupil whose works are extremely rare. Apart from the painting in Ekaterinburg, there is a Return of the Prodigal Son in the private collection of Mr Treul in Milwaukee (USA) and an oil sketch of the latter subject in the Ashmolean Museum in Oxford. All three are close in style and have identical ‘PLP’ monograms that enable them to be attributed to the same master. However, the work in Ekaterinburg is the only large, accomplished painting of the three.

The collections of Russian regional museums are not widely known to the public, and they merit the special attention of art historians. The exhibition that opened on 1 March 2013 at the Ekaterinburg Museum of Fine Arts presents more than 70 paintings, graphic works and Delftware from five Russian museum collections in Ekaterinburg, Omsk, Nizhny Tagil, Tyumen and Perm. It has been organized by the Ekaterinburg Museum of Fine Arts in the context of the Russian-Netherlands Bilateral Year 2013, and it is hoped that it will attract the attention of experts and connoisseurs.

One of the main aims of this project is to underline the diversity and trace the development of Dutch, Flemish and Belgian art from the seventeenth to the nineteenth centuries. The exhibition presents a selection of beautiful Dutch paintings from the Golden Age, monumental Flemish paintings with religious and mythological subjects, as well as the romantic landscapes and still-life paintings of Dutch and Belgian artists from the nineteenth century. Ekaterinburg Museum of Fine Arts is proud to present such highlights as panel paintings by Frans II Francken, portraits by Nicolaes Maes and Hendrick van Vliet, a landscape by Jan van Goyen, and genre paintings by Isaac van Ostade and Jan Baptist Lambrechts. 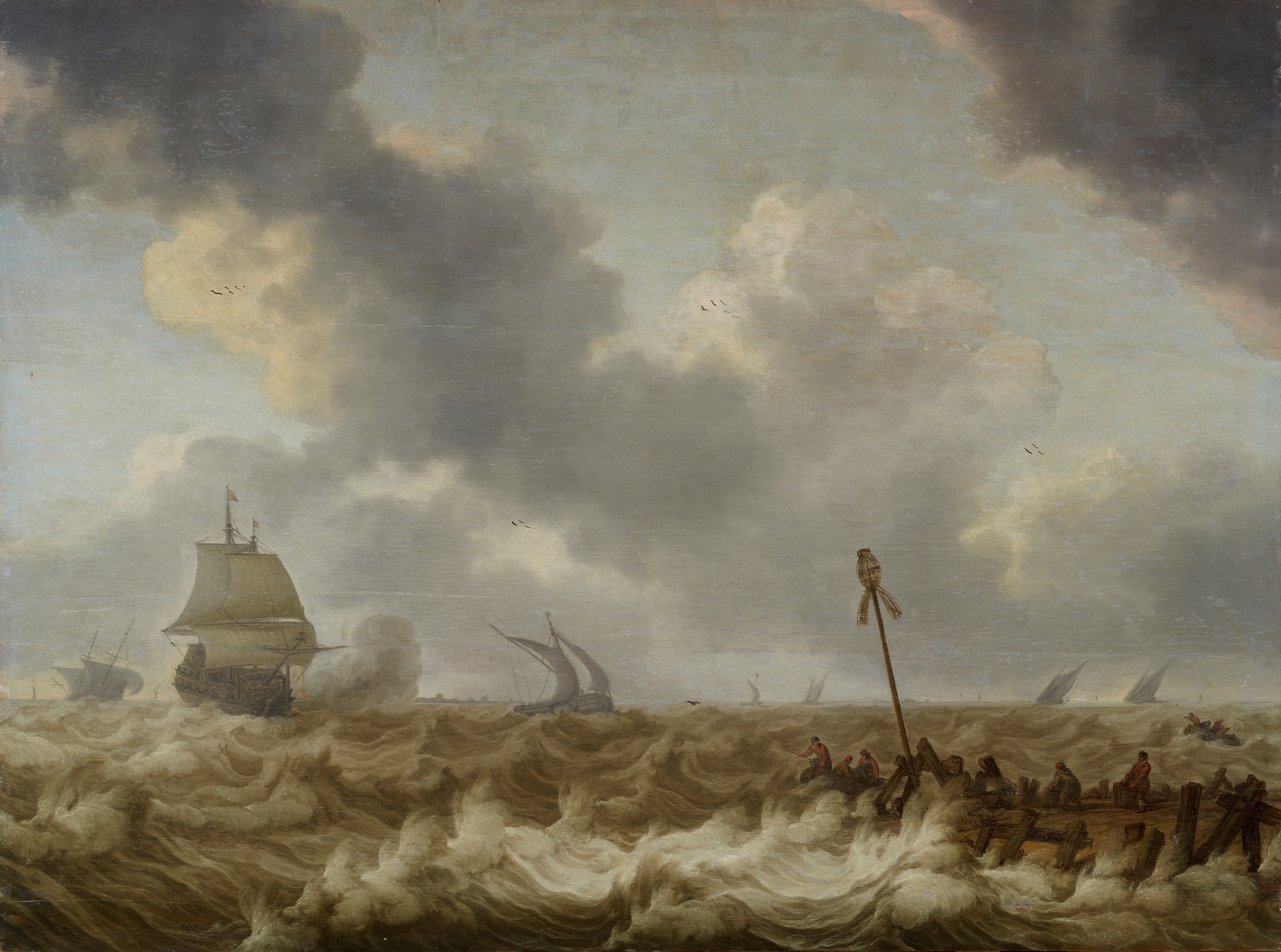 This exhibition is one of the largest projects staged by the Ekaterinburg Museum of Fine Arts on Dutch, Flemish and Belgian art in the last few years. It includes not only paintings, but also Dutch and Flemish prints and drawings that are extremely rare in Russian regional collections. All the prints and drawings that are on display are from the collection of the Ekaterinburg Museum of Fine Arts. They include sheets by Pieter Jansz Saenredam, Leonaert Bramer and Abraham Bloemaert, and some of the prints are of a very high quality. Another part of the exhibition is devoted to eighteenth-century Delftware. Together with the paintings, prints and drawings it serves to present a detailed picture of the life and taste of the period. Delftware is also rather scarce in Russian regional collections. The seven pieces in the exhibition are on loan from the museums in Omsk, Nizhny Tagil and Tyumen.

This will be a unique opportunity to see a great number of Dutch, Flemish and Belgian pieces from Russian regional collections that have not yet received the attention they deserve from art historians.