The Rhode Island School of Design (RISD) and the RISD Museum were founded and developed by a small group of women in 1877, more than 40 years before women in America even gained the right to vote. That year Helen Adelia Rowe Metcalf (1830-1895) urged 34 members of the Rhode Island Women’s Centennial Commission to invest their group’s surplus funding of $1,675, which they had raised for the state’s contribution to the Philadelphia Centennial Exhibition in 1876, in founding a school of art and design. The idea behind the college was driven by the desire to support Rhode Island’s thriving textile, jewelry, and silver industries in particular, with the first courses of study offered at RISD addressing two main areas: Freehand Drawing and Painting and Mechanical Drawing and Design.

Metcalf devoted her time, energy, vision and funds into running the institution and ensuring its survival, inspiring her daughter, Eliza Greene Metcalf Radeke (1854–1931), to join her in furthering the mission of RISD and ultimately become the first woman to serve as RISD’s president from 1913-1931. An avid and eclectic collector, Radeke worked closely with artists, dealers and museum directors to develop the RISD Museum’s extensive collection and funded the construction of galleries for the museum.

The RISD Museum is internationally recognized, and it is distinguished by its relationship to the acclaimed Rhode Island School of Art and Design. The Museum houses seven curatorial departments and approximately 100,000 objects dating from the 4th millennium BCE to the present day, featuring major figures in the history of visual art and culture. The Museum owns approximately 600 Dutch and Flemish objects.

Since the early 1900’s, gifts and bequests of Dutch decorative arts ranging from high design to everyday have been collected by the RISD Museum. Among the earliest were gifts from Eliza Radeke, including ceramics, glass, and several unique pieces of jewelry such as an eagle claw ring (fig. 1). Popular in the early 1600s, its gold form is contrasted with dark blue enamel and set with citrine. Though examples are rarely found today, their popularity is evidenced by their inclusion in Dutch portraits from the period. After Mrs. Radeke’s death in 1931, over 50 Delft tiles from the 1700s depicting architecture, landscapes, and images of daily life were bequeathed to the collection. 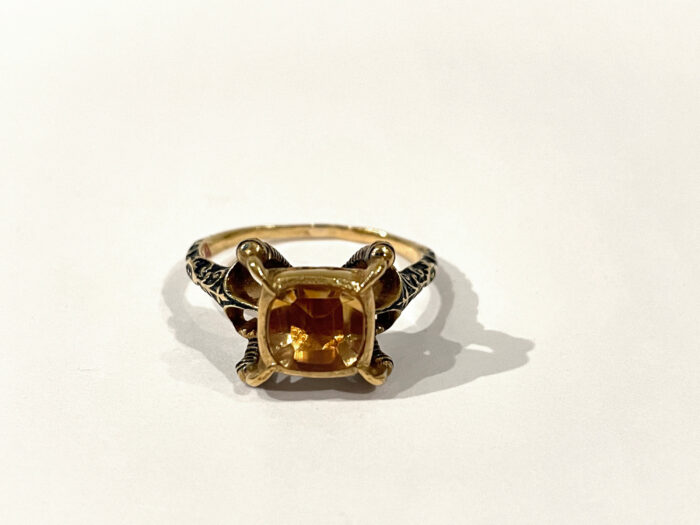 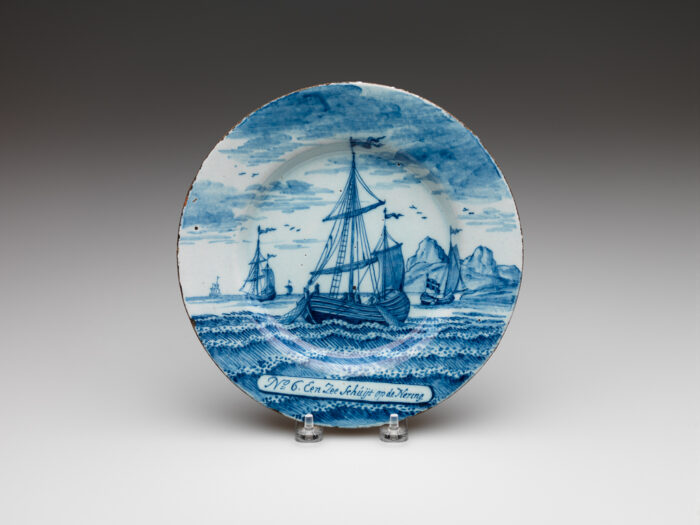 Several objects bequeathed to the museum in 1909 from Mrs. Hope Brown Russell are standouts among our Dutch collection. These include a Delft plate produced by De Porceleyne Byl, which is one of twelve that illustrates the herring trade (fig. 2). As noted on the front, RISD’s plate is number 6 in the series, which depicts fishing boats casting their nets for herring. Highlighting the talents of Dutch glassmakers is a blown glass goblet with an engraved design of a three-masted ship and the inscription, “HET LANDS WELVAAREN” (to the prosperity of the country). 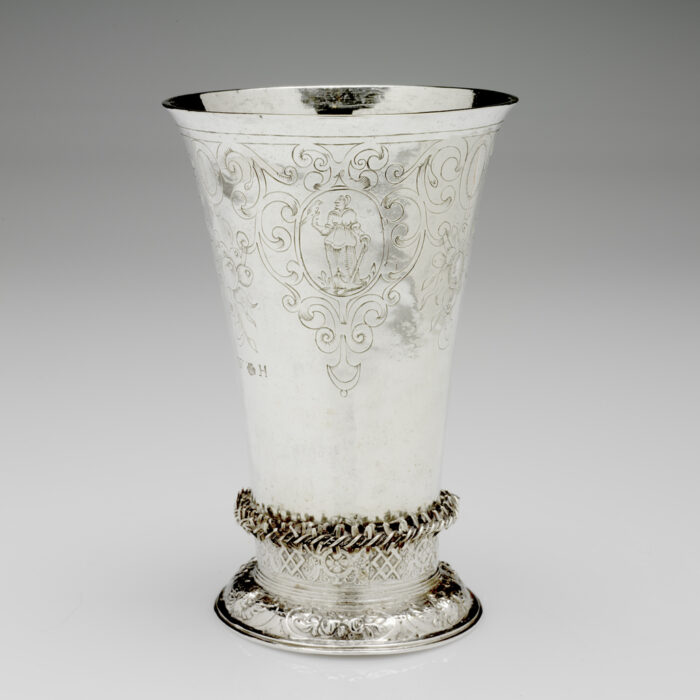 Examples of both religious and secular objects made in silver demonstrate the creativity and skill of metalsmiths in the Netherlands. A caddy spoon reveals the Dutch interest in depicting scenes of everyday life, featuring a whimsical design in repousse of a figure on ice skates. A long stick in their hand likely references the popular seventeenth century winter game of kolf, a hockey-like sport. Silver was also an important material for objects of religious significance, exemplified by RISD’s communion beaker (fig. 3). Used to serve consecrated wine, the spiked collar around the base would have recalled to the congregant the crown of thorns placed on Jesus’s head. Engraved images of three personifications of Christian virtue, Fortitude, Hope, and Justice, further emphasized the importance of the sacrament.

The Netherlandish works in the textile collection of the RISD Museum are particularly strong in lace and needlework examples, with a smattering of other special works of weaving that carry renowned provenance. Highlights of the needlework collection include a linen and silk darning sampler from 1773 and a late 1600s drawnwork example, a gift of Radeke. Mrs. Radeke seeded the lace collections of the Museum, with many of the Flemish laces coming by way of her gifts to the collection in the 1910s.

A fine group of tapestries round out the woven collection, ranging from those designed by David Teniers III and worked by Jan van Leefdael to a large leaf verdure tapestry with animals and birds, ca. 1520 (fig. 4). This large tapestry was made in Tournai, which by the 1500s was well established as a center of Europe’s tapestry-weaving industry. The design depicts an imagined forest teeming with flowers, oversized foliage, mythical beasts, and birds and animals native to Europe, Asia, Africa, and the Americas, which may refer to the rich offerings reaching Europe from trading centers across the globe. 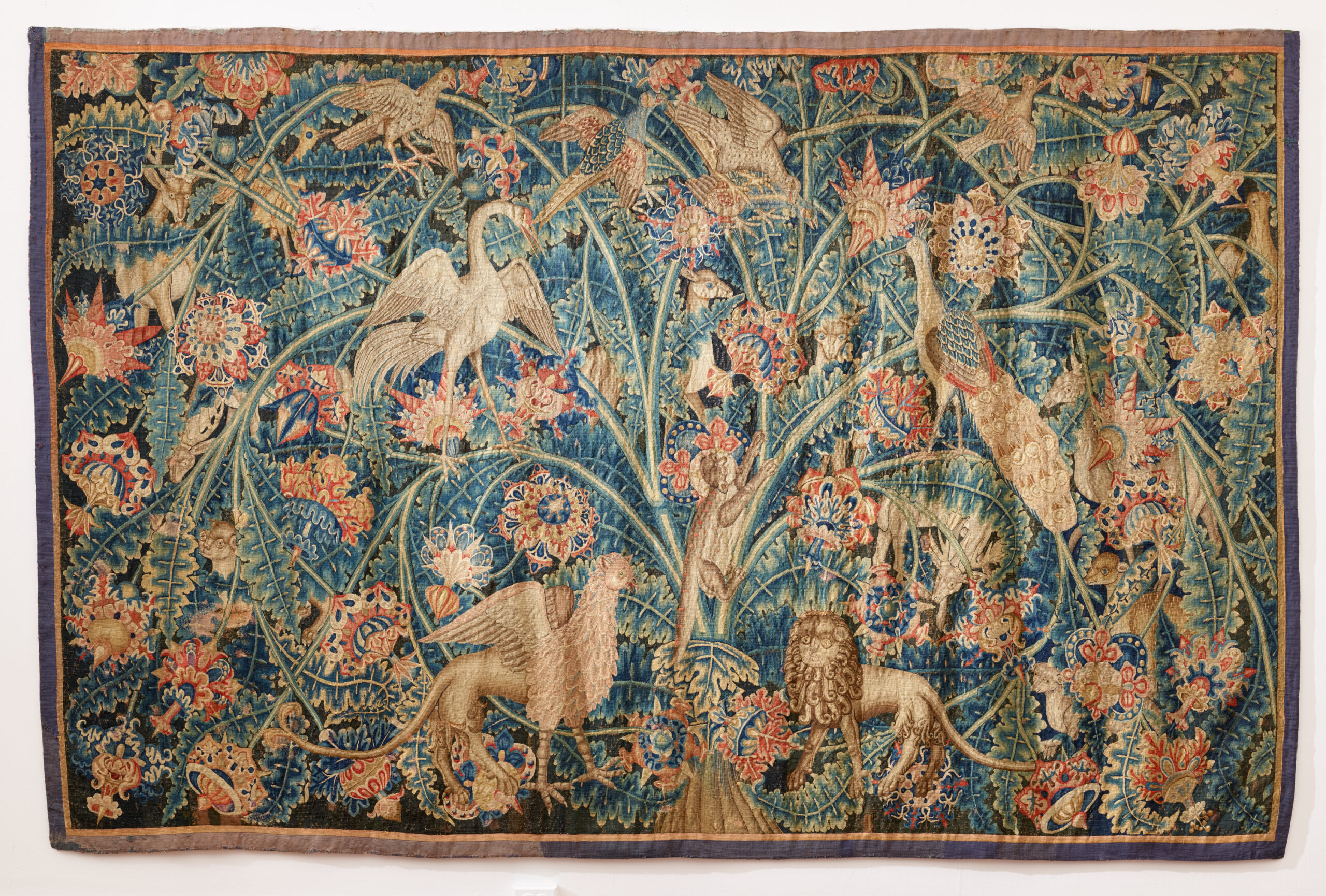 Lastly an exceptionally rare work is the Dutch, Japanese, Chinese textile sample book. While assembled in the early 1900s, the fabric samples within this bound folio fall mostly within the 1700s. From woven linen stripes to indigo resist prints to gilded paper brocades, this folio is a physical testament to the very early and robust Dutch trade with Japan. In the seventeenth century exchange between the Netherlands and Japan began, facilitated in 1609 by way of the VOC. At this point only the Portuguese and the Dutch had “red-seal” status to export goods from Japan back to Europe.

The Museum’s 1917 purchase of Aert de Gelder’s Esther and Mordecai Writing the Second Letter of Purim (fig. 5), ca. 1685, established the standard for future painting acquisitions. In a darkly lit room, Esther and Mordecai compose the second letter of Purim, decreeing a day celebrating Jewish deliverance. Influenced by Rembrandt’s painterly technique and atmospheric play of lights and darks, de Gelder used broad, thickly layered strokes to emphasize the age and humanity of the figures.

By mid-century it was joined by Salomon van Ruysdael’s The Ferry Boat of 1645, a Utrecht Crucifixion with Two Thieves, dating to ca. 1450, attributed to Hillebrant van Rewijk, and a Bruges Master’s Portrait of a Cleric of ca. 1490. Acquired in 1939, this elegant Self Portrait (fig. 6), ca. 1600, is an intriguing variant on an artist’s self-portrait. It identifies the subject as the painter, seated before his own easel and palette, and expands on his cultural achievements by emphasizing his musical abilities. Although unsigned, this portrait has been attributed to Paul Bril (1553/4-1626), a Flemish artist who forged a highly successful career in Rome. The sitter’s confident gaze, elegant apparel, and comfortable strum of the instrument all seek to convince the viewer of the excellence and success of his method. Sober likenesses by Bartholomeus van der Helst, Jan Antonisz. van Ravesteyn and Paulus Moreelse followed, complemented by the acquisition of Willem Drost’s painterly Portrait of a Young Man of ca. 1655 in 1983. 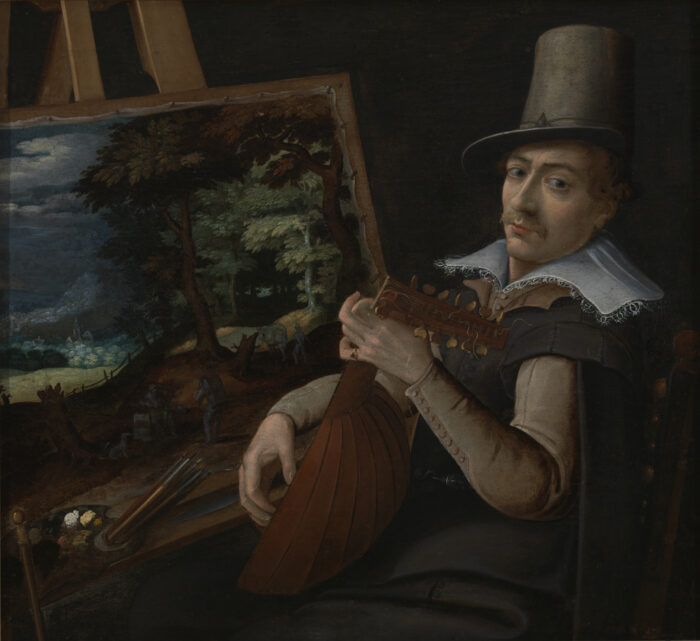 In the 1950s and early 1960s museum directors John Maxon and David Carter made significant purchases, including Hendrik Goltzius’s Christ on the Cold Stone with Two Angels of 1602, Matthias Stom’s Christ at the Column of ca. 1635, and Jacob Jordaens the Younger’s Return of the Holy Family from Egypt of ca. 1615-16. Their capstone acquisition was Joachim Wtewael’s exuberant Mannerist celebration of The Marriage of Peleus and Thetis of 1610 (fig. 7). At this exuberant outdoor celebration, a trumpeting messenger announces the marriage of the mortal Peleus and the Greek goddess Thetis. Hermes, at center, serves the conversing bride and groom while Apollo, at right, serenades them with his lyre. In the sky above, Eris, the goddess of discord, prepares to toss the golden apple that will incite the Trojan War. Viewers educated in Greek myth would have perceived Eris’s presence as a warning against earthly excess and immorality.

Director Frank Robinson, a Dutch specialist in his own right, reinforced this collecting focus, sustaining a tradition of gifts that encompasses Dirck van Delen’s Architectural Interior at Night with the Priests of Bel of ca. 1628, Hendrik van Steenwijk the Elder’s Interior of Aachen Cathedral of 1575, and various genre subjects. Rare works by women include Catharina van Hemessen’s Portrait of a Man of ca. 1549 and Jeanne Vergouwen’s Portrait of Andries Rademaker, Notary, displaying a Statuette of 1656. New scholarship by Emily J. Peters has shed light on the Southern Netherlandish panel painting Madonna and Child with Saint Barbara and Saint Catherine of ca. 1425-50, with its lavish textiles, Dutch inscription and Leonardesque figures proclaiming artistic exchange with Italy in the sixteenth century.

Some of the first Dutch and Flemish prints and drawings at the RISD Museum first entered the collection in 1913 at the bequest of Isaac C. Bates. Primarily consisting of engraved and/or etched portraits, this bequest included Rembrandt’s Mother with Her Hand on Her Chest. Some of the more notable Dutch and Flemish drawings came in shortly afterwards as gifts from Eliza Radeke in the 1920s, including Study for Malchus by Anthony van Dyck, Study of a Young Woman by Jan Cossiers, and Bacchus after Peter Paul Rubens, which remain stand out examples of Early Modern drawings in the RISD Museum collection.

RISD’s Dutch and Flemish collection of works on paper has steadily grown over the subsequent decades thanks to the generosity of donors and the guidance of various directors and curators. In the late 1940s and early 1950s, Henry D. Sharpe gave the museum a number of works by Dutch and Flemish artists, including additional prints by Rembrandt such as The Artist Drawing from the Model (Het Beeldt van Pigmalion) (fig. 8). In the lower left corner of this unfinished etching, an artist, presumably Rembrandt himself, sits on a low chair and sketches from a nude female model. The nude model emerges from this dark space as both a subject and a source of inspiration. Despite Rembrandt’s well-documented practice of working with nude models, this female figure is not drawn from life, but adapted from a famous allegorical image of Fame in an engraving by the fifteenth century Italian Renaissance artist Jacopo de’ Barbari. The print’s unfinished state suggests that the process of creation is ongoing and that other sources may yet contribute before Rembrandt’s blank canvas, seen in the background, is filled.  Additionally, Sharpe gave chiaroscuro woodcuts by Goltzius from the series Demogorgon and the Deities, including Nox. Gifts and acquisitions such as these reflect RISD’s continued interests in developing a collection that has both historical and pedagogical significance. 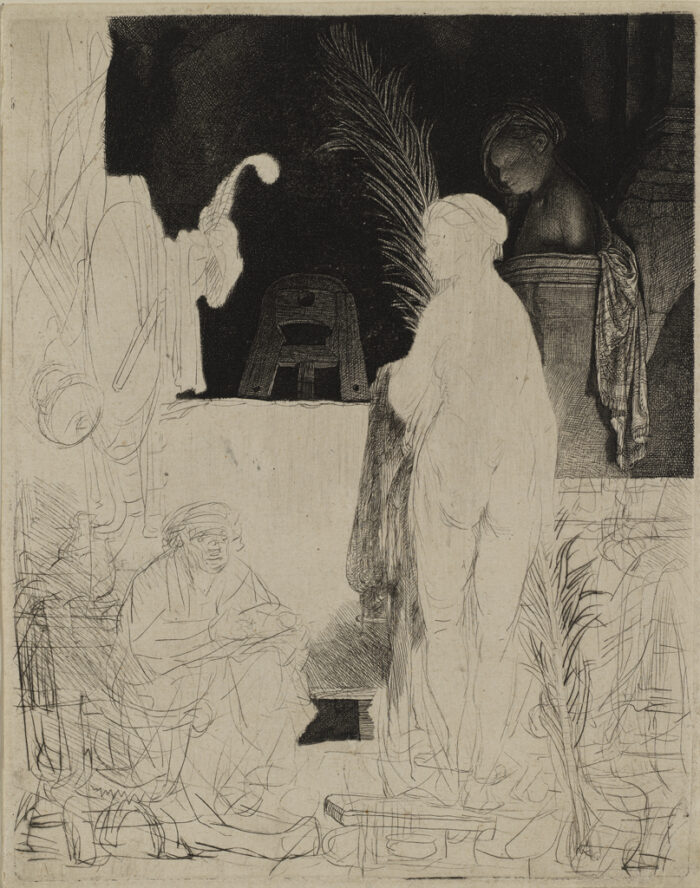 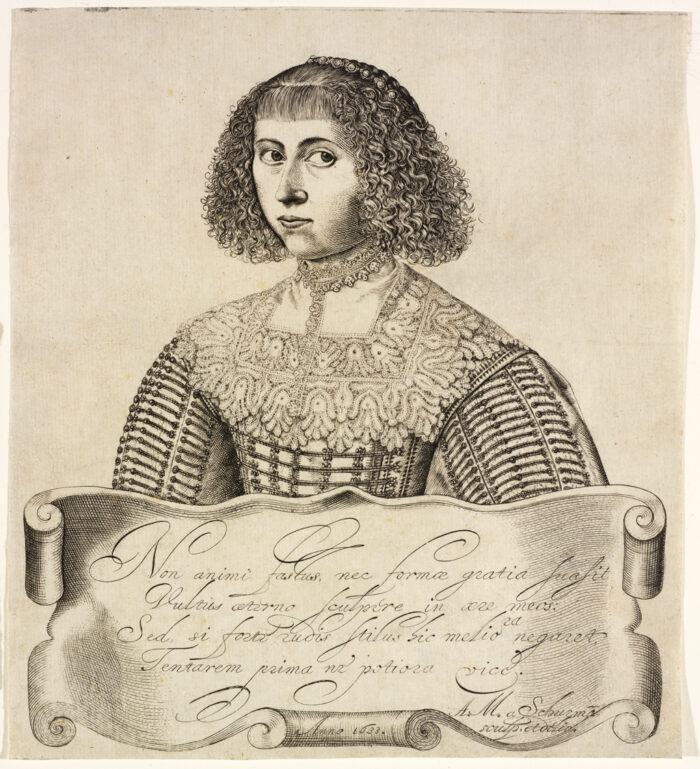 In 1948, Helen Metcalf Danforth gave the first work by a Dutch woman artist to the collection: the seventeenth century engraving Portrait of Christopher Carlile, by Magdelena van der Passe. Van der Passe was the teacher of Anna Maria van Schurman, whose exquisitely engraved self-portrait (fig. 9) underscores her belief that women should be educated, a radical position at the time. Van Schurman was a scholar—the first female student at the University of Utrecht—and a poet, as well as a visual artist, for whom engraving was one of many artistic pursuits including painting and engraving. While a significant minority in the overall collection, these works by Van der Passe and Van Schurman reflect the origins of the institution: women who pioneered in the arts.