In 1961 the city of Bruges acquired from a private collection in Belgium a copy after Pieter Bruegel the Elder’s Sermon of Saint John the Baptist that has since been on extended display several times as part of the permanent collection of the Groeningemuseum. The discolored varnish and some minor retouches gave the panel a yellowish patina that detracted from the otherwise superb state of conservation of the pictorial surface. The question was raised in 2011 whether the panel should undergo conservation treatment to remove the varnish and to enhance the few retouches. Since the wood of the panel’s frame was warped on one side and therefore gave a distorted impression, the possibility of reframing was put forward. The issue of a custom-made frame and the objectives of the conservation treatment were discussed by Nadia Vangampelaere (Collection and Documentation Department at Musea Brugge), Francine Huys (Paintings Conservator at Musea Brugge), Till-Holger Borchert (Chief Curator at the Groeningemuseum) and Manfred Sellink, Director of Musea Brugge and eminent specialist on Pieter Bruegel the Elder.

It would have been impossible for Francine Huys to carry out the treatment in a reasonable amount of time in addition to her regular tasks. She agreed, however, to supervise an external conservator, so Musea Brugge entrusted the task to the Brussels-based picture conservator Laetitia Golenvaux, on the condition that she carry out the treatment in the museum’s conservation studio in Bruges, which made it possible to discuss problems instantly with the curatorial staff and the museum’s conservation staff. This manner of working proved to be very efficient, and gave rise to frequent discussions about the condition, date and authorship of the Bruges panel. In particular, its connection with Jan Brueghel the Elder rather than Pieter Brueghel the Younger merits further investigation. 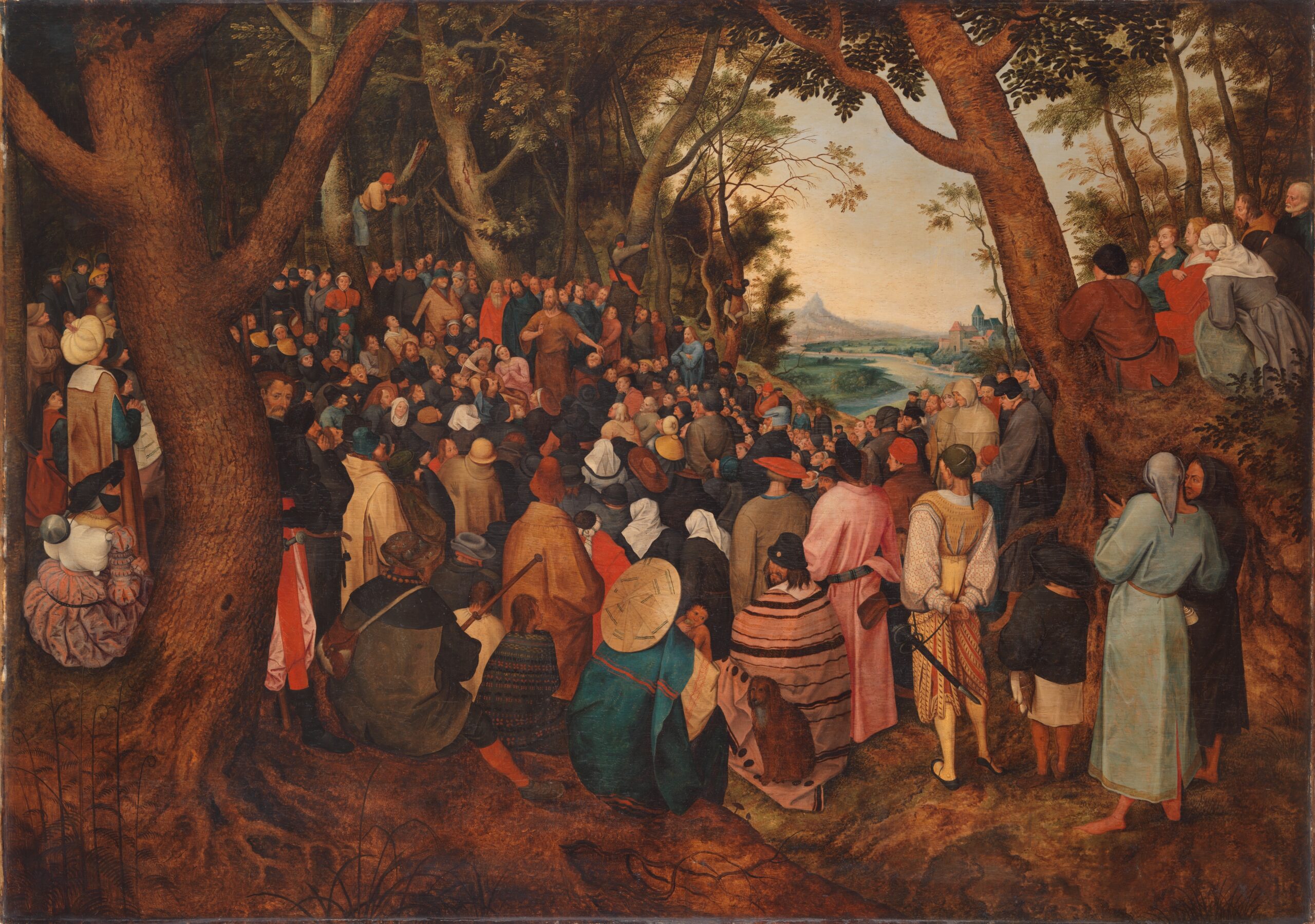 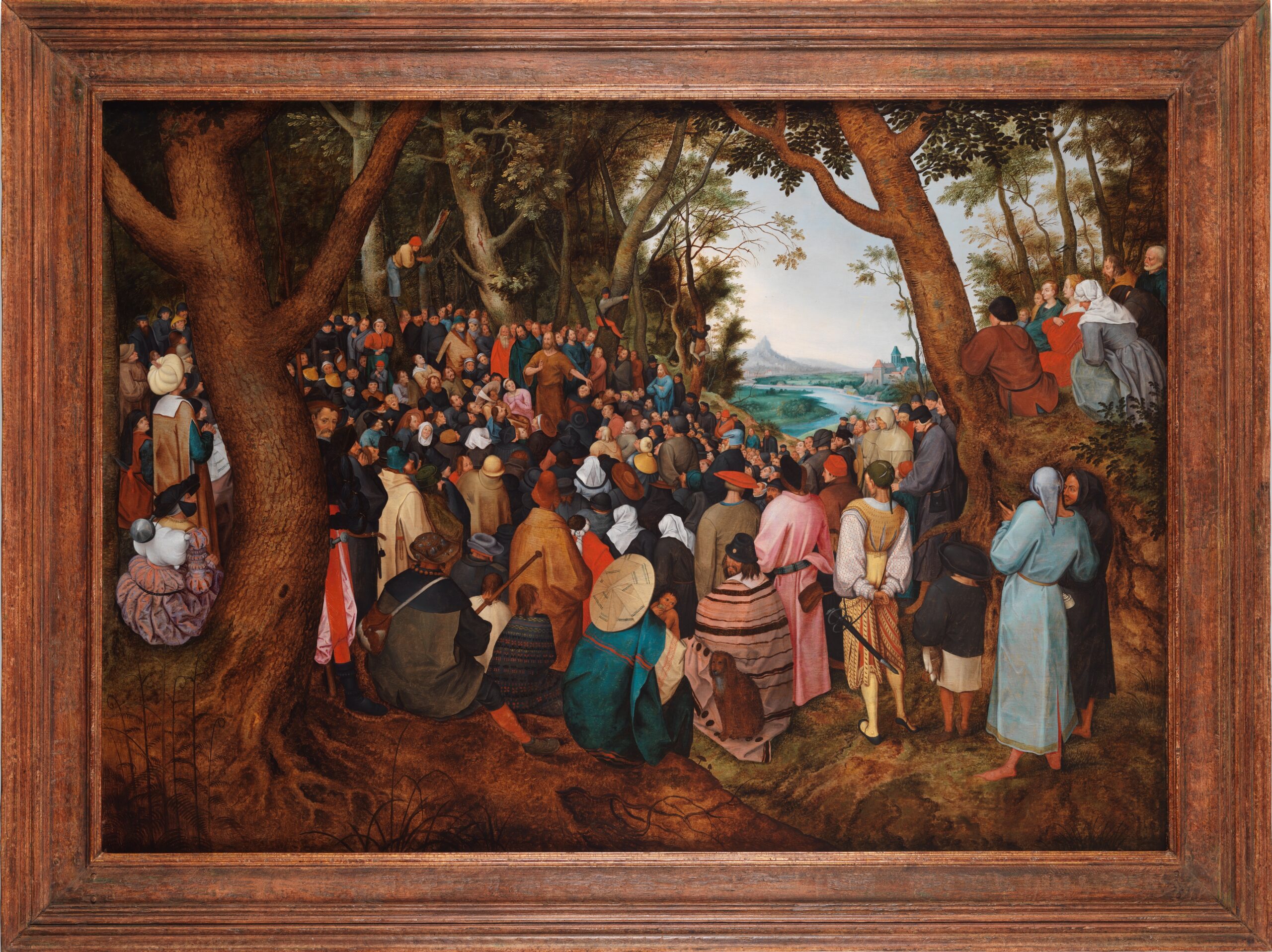 Fortunately, the recently published study on the workshop of Pieter Brueghel the Younger by Christina Currie (KIK-IRPA Brussels) and Dominique Allart (University of Liége) includes detailed technical examinations of the different versions of the Sermon of Saint John the Baptist. As the study focuses on in-depth technical research and the relationship between the paintings of Pieter Bruegel the Elder and those of his son Pieter Brueghel the Younger, the three-volume dissertation provides new insights into such basic issues as doubtful attributions, technical problems, provenance, workshops, early copying techniques and so on. Seen in this light, the treatment of the version in the Groeningemuseum is even more interesting.

The study confirms the authenticity of the panel in the Szépmüvészeti Múzeum in Budapest as an autograph work by Pieter Bruegel the Elder. However, there are speculations about the provenance of the panel. It is impossible to verify its purchase by the Hungarian nobleman Boldizsár Batthyányior with a view to establishing its provenance from the collection of the Archduchess Isabella.  In the first place, documentary evidence is lacking, and the measurements noted in Isabella’s inventories differ from those of the Budapest panel. Moreover, even though Pieter Stevens, a famous art collector from Antwerp, noted in the margin of his copy of Karl van Mander’s Schilder-boeck (Rome, Bibliotheca Hertziana) that he had seen the original painting by Pieter Bruegel the Elder, he failed to mention where he had seen it. Even the possibility that Bruegel painted more than one version of the Sermon (as he apparently did of the Tower of Babel) cannot be dismissed. Currie and Allart confirm what has long been accepted by the majority of scholars, namely that the Budapest panel is an original, signed painting by Pieter Bruegel the Elder.

The Groeningemuseum’s unsigned version differs from the original in its proportions, although the figures and details of the landscape are of approximately the same size. The panel marks – two right hands and a tower – confirm that the panel was produced in Antwerp some time between 1618 and ± 1626. The panel’s underdrawing is closely related to other copies made after the Budapest prototype, namely a version in the Stedelijk Museum Lier and another in a private collection in Brussels. Currie and Allart suggest that all of the versions were produced in the same workshop, using the same model drawing, and think that this workshop must have been the Antwerp studio of Pieter Brueghel the Younger. This stands to reason, given the underdrawing, but the attribution is not entirely convincing in terms of the palette, the painter’s technical skill, and finally, the quality of the paint surface. With regard to the paint surface in particular, it would be worthwhile to make a close comparison of the panel in the Groeningemuseum and the two copies after Bruegel’s Sermon of Saint John the Baptist that are attributed to Jan Brueghel the Elder (Alte Pinakothek, Munich and Kunstmuseum Basel).

Magdalena Sobczyk is an intern at the Groeningemuseum in Bruges. The internship is part of the Erasmus Lifelong Learning Programme. She is studying art history at the University of Gdansk, Poland.