Connoisseurship. It is a discipline that is inextricably bound up with art history. The introduction of scientific research methods, hesitantly at first but swelling to a flood in the 1970s and 80s, signified an enormous enrichment of art-historical research, and for a while it looked as if subjectivity, the fundamental characteristic of connoisseurship, had been banished forever. After all, thanks to research methods like X-radiography, dendrochronology. IRR (infrared reflectography) and MA-XRF (macro X-ray fluorescence), we are now in a far better position to chart the physical history of a work of art. In addition, those tools often provide essential keys for interpretation. But connoisseurship also plays a part in the assessment of technical findings, for those results are by no means always unequivocal, and are thus open to several interpretations. Subjectivity, a judgment that is based partly on intuition – the art historian must learn to live with it. 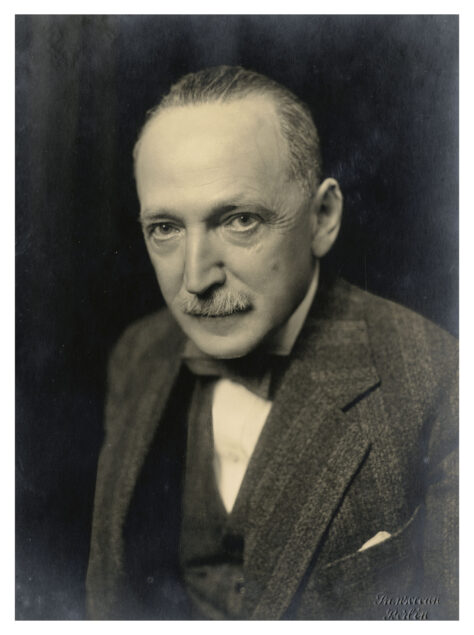 No one expressed the essence of connoisseurship, together with its inevitable pitfalls, so well as the German art historian Max J. Friedländer (1867-1958) (fig. 1). He devoted scores of articles and separate publications to the subject, and his carefully polished sentences, that seem to have flowed from his pen like lapidary maxims, still command admiration. Friedländer was a museum man, although one would not suspect it from his bibliography, which lists more than 800 publications. Under the energetic and tireless leadership of Wilhelm Bode (1845-1929), the modest, slightly shy but highly ambitious Friedländer developed in the early decades of the twentieth century into a formidable connoisseur, mainly of early Netherlandish painting, with a network that spanned the globe.

Having grown up barely 200 meters from the Altes Museum in Berlin, a factoid that he loved pointing out (fig. 4), Friedländer joined the city’s Gemäldegalerie in 1896 as Bode’s academic assistant. Their very different personalities must have meshed together almost seamlessly, for in the years that followed the Bode/Friedländer duo evolved into a well-oiled machine, with Friedländer as the subordinate doing the preparatory work and Bode taking the decisions (fig. 2). In 1908 their collaboration gained Friedländer first the directorship of the Berlin Kupferstichkabinett and four years later the daily running of the Gemäldegalerie, with Bode retaining overall control as Generaldirektor. 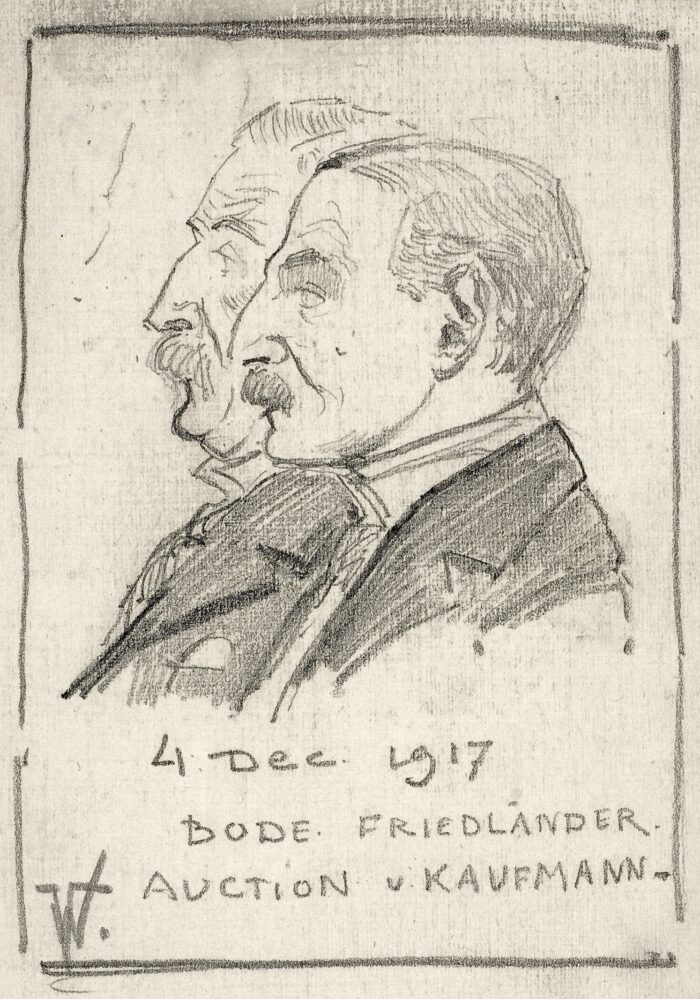 In the early years after the Second World War, when paintings from the Berlin museum went on a tour along various museums, including Amsterdam’s Rijksmuseum in 1950, the renewed acquaintance with the collection made a great impression on Friedländer, who had emigrated to the Netherlands just before war broke out. Seeing Bode’s life’s work outside its familiar surroundings touched the now elderly Friedländer deeply, as if, wrote Rudolf Heilbrunn in Max Friedländer. Erinnerungen und Aufzeichnungen (1967), an ardent, youthful, lost love was finally found again.

On Art and Connoisseurship

Although there were a few forerunners of On Art and Connoisseurship, such as Der Kunstkenner (1919) and Echt und Unecht. Aus den Erfahrungen des Kunstkenners (1929), the later work can be regarded as the most important articulation of Friedländer’s thoughts about the connoisseurship as a method. The first half of the 38 chapters are mainly devoted to such subjects as the art of looking, formal aspects and different genres of painting. The second half focuses mainly on the practical side of connoisseurship and its attendant limitations. Friedländer probably started writing Von Kunst und Kennerschaft in 1933, after the Nazis had purged the Berlin museums of Jewish influence and he was forced to pass his time at home. Von Kunst und Kennerschaft was announced in 1938 in a prospectus from Sperber-Verlag in Zürich, but the publication never appeared. The printed material became stranded in Bohemia, which had been annexed by Germany. Fortunately Bruno Cassirer, Friedländer’s German publisher, took the manuscript with him when he fled to England (figs. 3-4). Cassirer had it translated into English, so On Art and Connoisseurship appeared in 1942 after all. The book was a great success in England, judging by the many reviews it attracted, which were all faithfully forwarded to the author by Cassirer’s son-in-law, George Hill (Günther Hell). The first edition quickly sold out. Hill, in collaboration with Oprecht publishers in Zürich, ensured that a German edition was published in 1946, to Friedländer’s great joy. 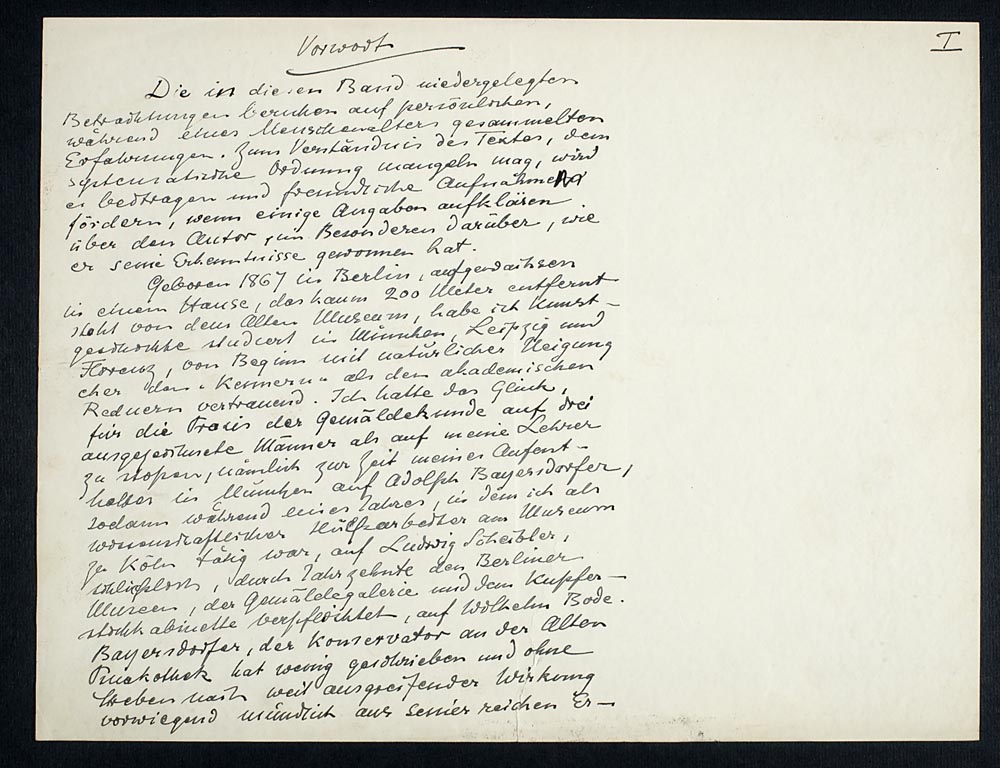 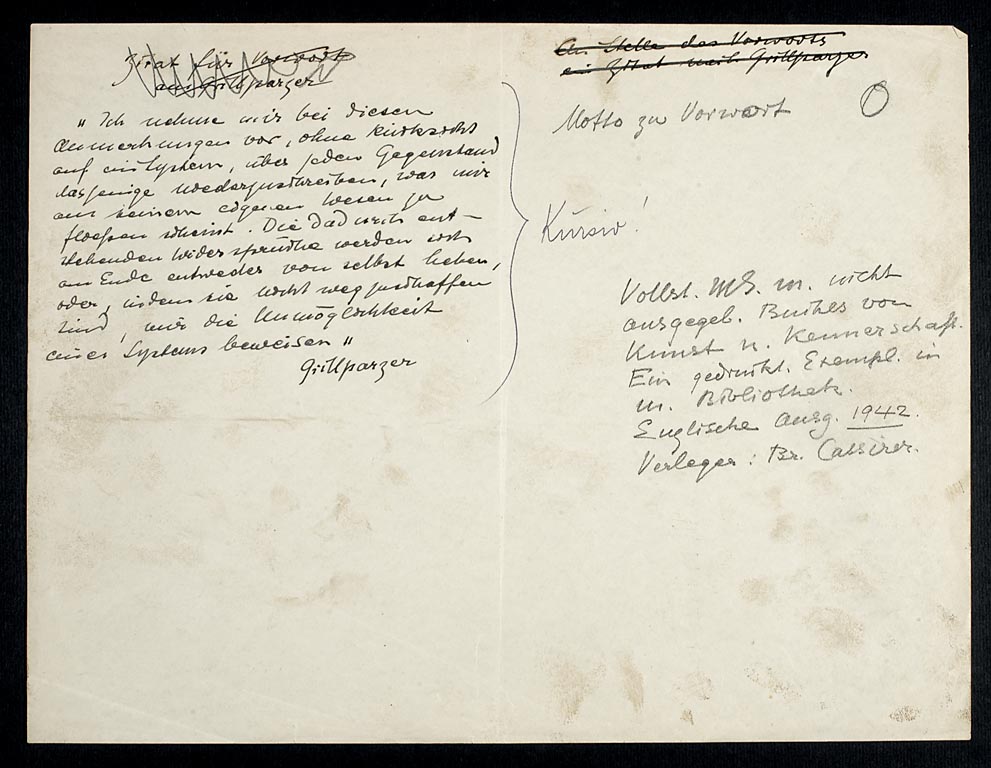 Scholarly Method or Not?

Connoisseurship as practised by Friedländer is the ability to recognize an artist’s hand, as well as to classify a work of art by period and place. In his view, the connoisseurship method most definitely did not consist of a formal analysis in which individual forms and colors were compared with each other, but of an inner observation, with the overall impression, the interplay of form and color, being the deciding factors. One thing that is absolutely essential for the exercise of connoisseurship is wide knowledge of the oeuvres of the artists who were active in a particular period and area, and more specifically a knowledge of the stylistic features that characterize their work. ‘Memory of forms’ (Formengedächtnis) accordingly has less to do with remembering forms one has already seen and far more with reexperiencing feelings about something that one has already seen.

When Friedländer began his career many paintings were anonymous or had dubious attributions (fig. 5). This, of course, was because early Netherlandish paintings are rarely signed. There were barely any reference books or monographs, and in most cases a start had yet to be made with the construction of artists’ oeuvres. Since many pictures were still in private hands or the art trade they were often difficult to access. As a result, one deduces from his notebooks, Friedländer spent many months each year traveling around so as to see as many paintings with his own eyes as possible. He also tried to collect as many photographs (black-and-white, of course) as he could. He was one of the first generation of art historians to benefit from the growth of reproduction photography by putting together photographic documentation to assist them in their art-historical work. In On Art and Connoisseurship, though, he stresses that photographs cannot possibly replace the original works of art: ‘as a basis of judgment they are to be excluded as far as possible’. 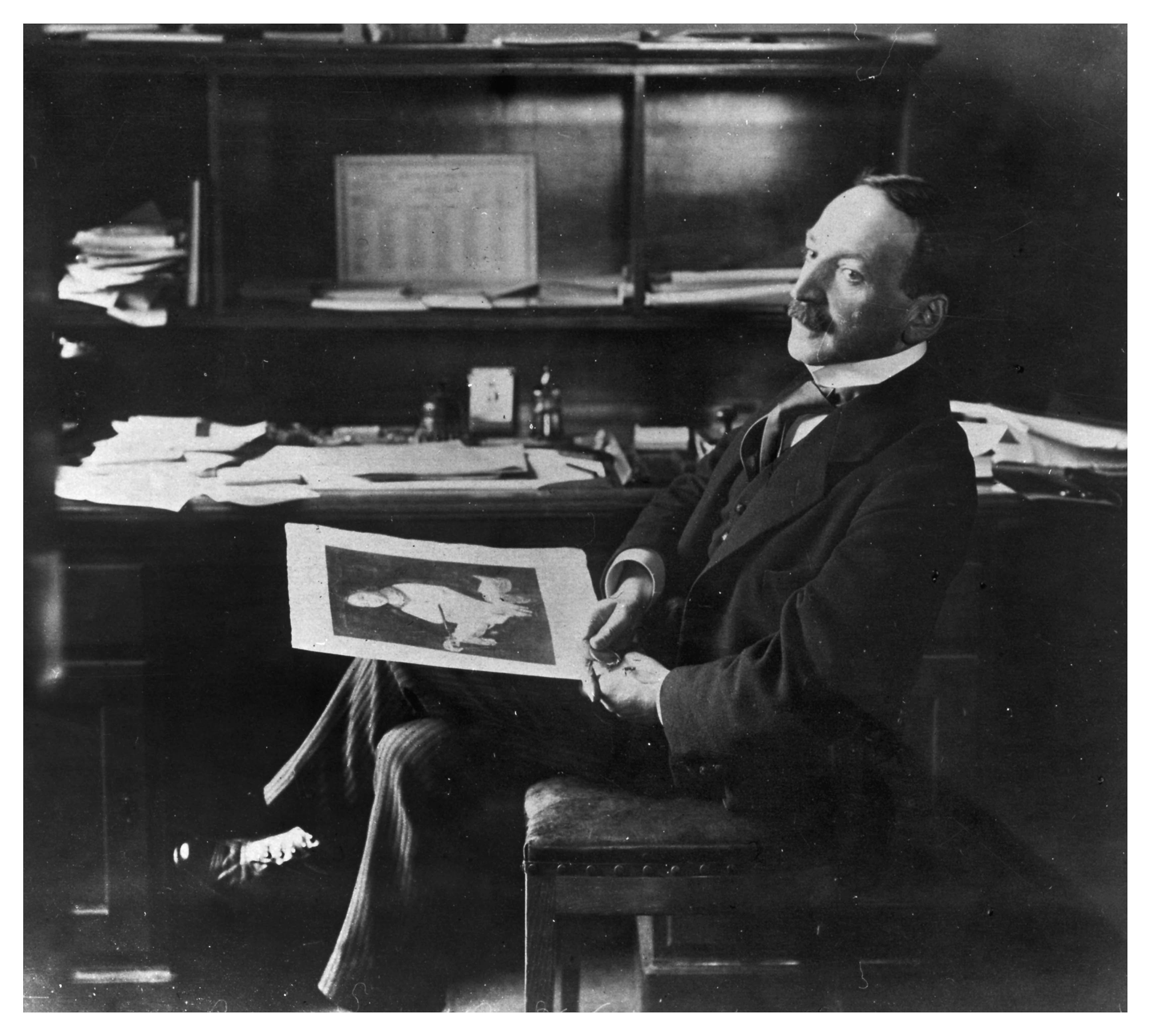 Friedländer’s method was to arrange paintings systematically, primarily on the grounds of style criticism, and then to tease out an artistic personality in their common characteristics and thus put an oeuvre together. The point of departure was usually one or more paintings with little or no doubt about the authorship, for example because the artist’s name was known from archival sources. He then tried to expand that core group by drawing up a hypothesis. His scholarly approach was not, in the main, to attribute those additional works to the master with absolute certainty, but to leave room for doubt. In that way he tried to sketch the most objective view possible of the various artists and their oeuvres, and to argue an elegant case for the characteristics that defined the work of a particular artist. Needless to say, the research done by subsequent generations of art historians have refined that picture, partly due to the advent of technical examination, but the foundations laid by Friedländer still keep their value today, and that is remarkable.

The results of his stylistic analysis were presented in countless articles and in his first survey, Von Eyck bis Bruegel (1916; revised edition 1921), but above all in Die altniederländische Malerei, which was published in 14 volumes between 1924 and 1937. In his foreword to the first volume he said a little about the aim of the series, which gathered together the work of several artists in each volume. His purpose was to present his findings as clearly as possible, but as he warned the reader, subjectivity could not be ruled out, and any attempt to arrive at an irrefutable cohesion was doomed to failure. The surviving artists’ oeuvres are too fragmentary for that. Whoever strives for objectivity and complete cohesion will inevitably fall into the traps of bias and assumption of patterns, thus creating a false picture of the subject. Friedländer did his utmost to avoid that. He did not believe in a method that consisted of anything other than ‘modest integrity’ (bescheiden Redlichkeit).

So Friedländer was well aware of the fact that connoisseurship embodies a subjective form of scholarship, the essence of which was formed by intuition. In his view, the absence of measurable facts, and arriving at a judgement that springs from personal feelings, make connoisseurship a branch of knowledge that does not rely on providing irrefutable proof but on the search for the highest degree of probability. That connoisseurship rests on a shaky basis is because errors are inevitable, but, Friedländer says, what sets the true connoisseur apart is that he or she has the courage to revise their opinion.

There was criticism of connoisseurship even in Friedländer’s day. The main objection was that it could not really call itself a method, not only because it lacks any theoretical underpinning but also because factual verification is impossible, whereas it is precisely that verifiable burden of proof that lies at the heart of any scientific method. Nowadays we know that, despite the verifiability of the results of technical examination, it too is not a method that always leads to irrefutable answers. With his characteristic sense of irony, Friedländer answered his critics in a contribution to Kunstchronik und Kunstmarkt (1919), in the firm conviction that the essence of connoisseurship simply cannot be altered with the aid of method. ‘Can one imagine a physicist being accused of an inability to characterize a superb sunrise? No, of course not, because the emotion evoked by a sunrise lies outside his field of research. The researcher who studies art, on the other hand, is concerned in essence with nothing other than the splendor of a sunrise. A painting is my research subject insofar as it is a work of art and excites the eye and the mind. A method that neglects this distinction between physics and art can hardly suffice.’ All the same, Friedländer would have embraced the introduction of scientific research methods in art history. Like the generations that came after him he would have been convinced that technical examination makes an indispensable contribution to the search for the highest degree of probability.

With thanks to Edwin Buijsen and Michiel Franken. Suzanne Laemers is Curator of fifteenth and sixteenth century Netherlandish painting at the Netherlands Institute for Art History (RKD) in The Hague. She has been a member of CODART since 2007.