Benediction Velum with the Instruments of the Passion, 1599 Gruuthusemuseum, Bruges

The Gruuthusemuseum is fortunate to have a beautiful collection of textiles. It also boasts several costumes, pieces of embroidery, more than thirty tapestries (mostly from Bruges) and some 250 fabrics and standards (flags), but the collection of lace, comprising around 1,200 pieces, is by far the most important sub-collection. It provides an overview of centuries of lace-making techniques and lace of various kinds. The origins of the lace collection go back to the earliest days of the museum, with the gift of the Liedts collection to the city of Bruges.

In 1887, it came to the attention of the Société Archéologique de Bruges (Society of Antiquaries of Bruges) that Baron Amedée Liedts was looking for a place to house the lace collection of his late wife, Augusta, who had met a tragic and untimely death. Her collection consisted of around 300 pieces of historical lace made between the sixteenth and the nineteenth century. The chairman of the Society, who knew the Baron personally, got in touch with him to discuss the terms of a possible gift. In his first letter, the chairman praised Bruges as a city that “is visited by so many foreigners throughout the year, and is known internationally for its lace industry in particular.” Moreover, he could offer the Baron a room in Gruuthuse Palace, which had been purchased by the city and was under restoration to accommodate the Society’s museum. 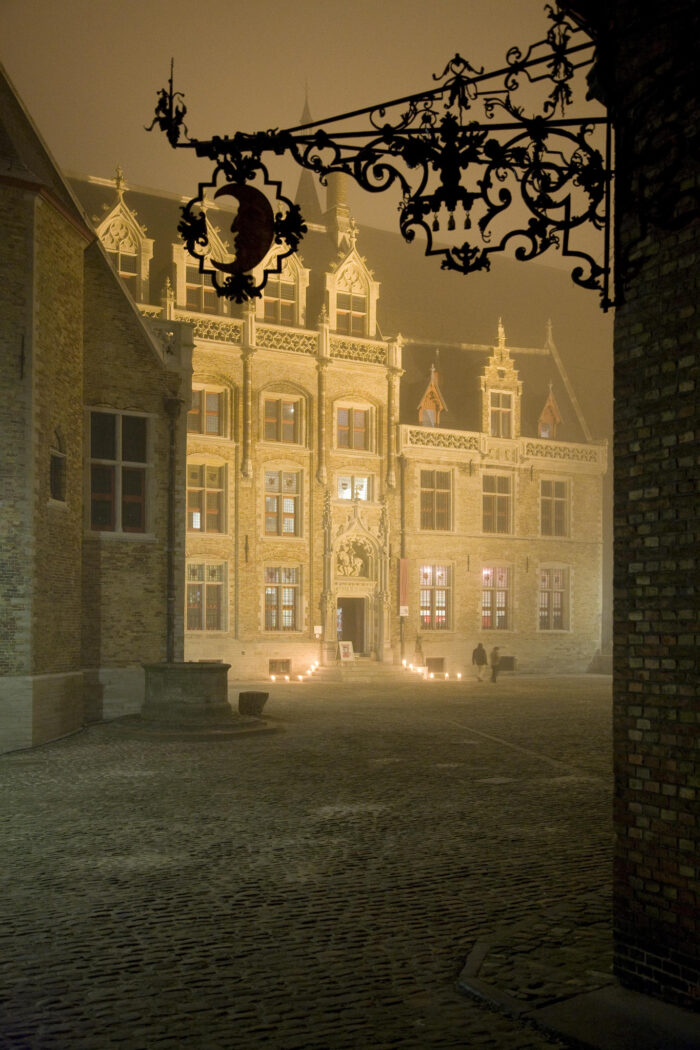 The Gruuthusemuseum in the evening
Cel Fotografie Stad Brugge

The Baron, with the artistic riches of Bruges at the back of his mind, expressed his delight at the proposal, and although a number of obstacles presented themselves, these were overcome and he eventually donated the lace collection to the city of Bruges. The records of the Society reveal that the Baron insisted on installing the lace himself in the Gruuthusemuseum. In October 1889, the lace rooms (one gallery and two adjoining salons) on the first floor of the Reie Wing opened their doors to the public. They featured a display of various techniques (embroidered lace, needlepoint, bobbin lace) and different types of lace (from Flanders, Brabant, Mechelen, Valenciennes, Binche, etc.). Straightaway a catalogue was published: Collection d’anciennes Dentelles flamandes Madame Augusta, Baronne Liedts, donnée à la ville de Bruges (Musée de Gruuthuse) (Bruges, 1889). The museum was therefore known in its early years as the ‘Musée des Dentelles’ (Lace Museum) or the ‘Musée des Dentelles et d’Antiquités’ (Museum of Lace and Antiquities).

Later on, the lace collection was supplemented with other important gifts and purchases. The most recent – the acquisition of the Verstraete-Lamoral collection – dates from 2010. This collection of some 340 pieces, including a great deal of twentieth-century lace, is a wonderful addition to the Liedts collection.

Lace was always on display in the Gruuthusemuseum until the beginning of the 1990s, when it was transferred to the nearby Arentshuis. In the past decade, pieces of lace from the museum’s collection have been shown at various temporary presentations in the Gruuthusemuseum. When the ongoing restoration is complete, the Gruuthusemuseum will again devote a complete room to its lace collection. On the route through the museum, the lace room follows a room that evokes the domestic life and home furnishings of well-off people living in the seventeenth and eighteenth centuries. The room featuring lace and textiles is both a sequel and an enrichment to that period room. Most of the lace that will be on display dates from the seventeenth or eighteenth centuries, with a few pieces from the early nineteenth century. Some articles of clothing and accessories will also be part of the exhibit. 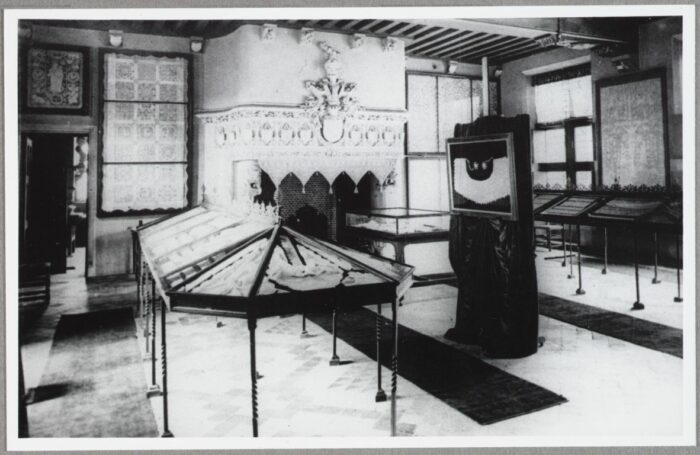 Presentation of the lace collection in 1904

The lace and textile room primarily tells a story about fashion, that is, the wearing of lace. It does not elucidate the production of lace and its socio-economic repercussions. This aspect of lace-making is shown in other places in Bruges, such as the Volkskundemuseum (Folklore Museum) and the Kantcentrum (Lace Center). The Gruuthusemuseum refers visitors to these places.

Throughout the centuries, men and women have embellished their clothing with lace accessories and embroidery, and this story is richly illustrated in the lace room. The beautiful, refined finish of all these works is striking. Worldly fashions are the focus of the display, although it is certain that ecclesiastical and civil dignitaries also sported lace on their robes, and they, too, would have chosen it from pieces similar to the examples presented in this room. Central to the exhibit will be display cases in which a number of garments and pieces of lace are presented three-dimensionally. This presentation will feature, in particular, gentlemen’s waistcoats from the eighteenth century and a lady’s jacket, as well as lace collars, cuffs, caps, lappets (the long streamers attached to the back of a cap), aprons, fans and a shawl.

These pieces will engage in a dialogue with portraits from the Groeninge collection: likenesses of ladies and gentlemen of the eighteenth and early nineteenth centuries. Lace accessories occur in all of these paintings. Close scrutiny will reveal that there is sometimes an almost exact correspondence between the “portrayed” lace and the showcased pieces. 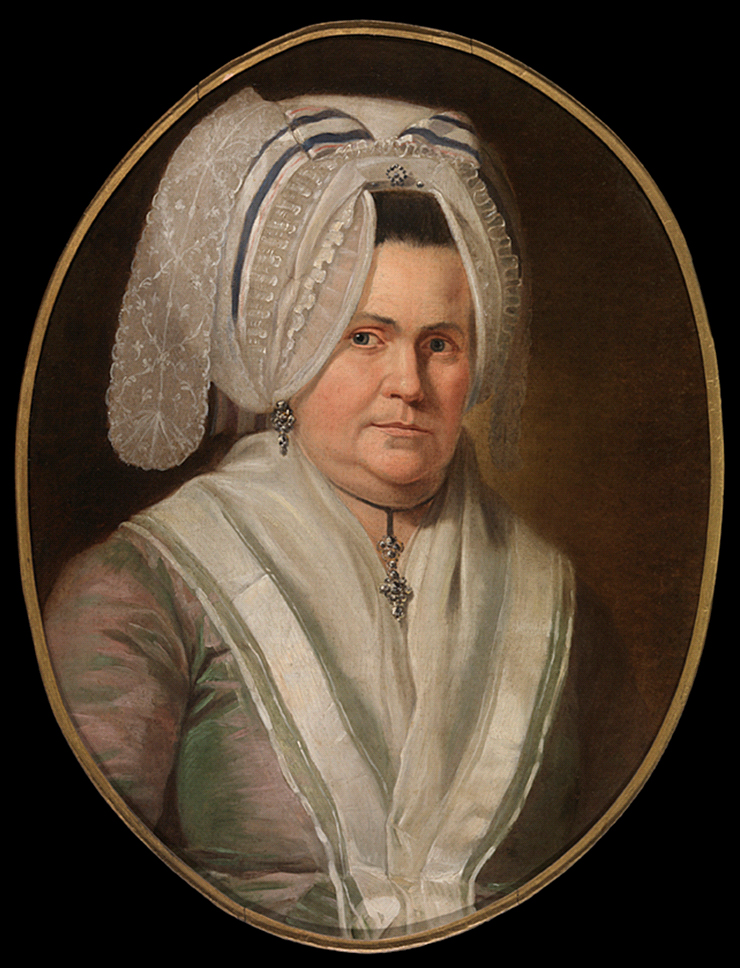 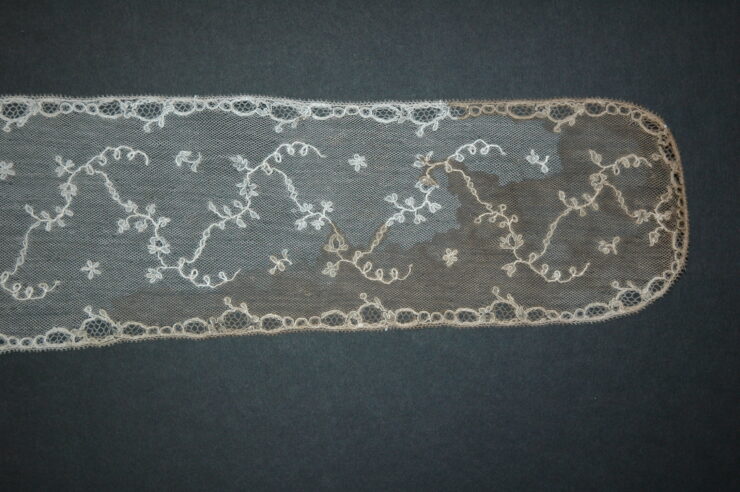 There is a good chance, however, that many of those visiting the Gruuthusemuseum will be searching for more. After all, Bruges is still a city linked to lace, and the courses given in the Kantcentrum are attended by enthusiasts from all over the world. For such visitors there will be a display case, more discreetly placed but richly stocked, in which various kinds of lace and lace-making techniques are presented.

Some of the objects lend themselves to further explanation, because they are connected either with present-day trends or with the history of Bruges, which forms the context of, or backdrop to, the works displayed in the Gruuthusemuseum. An eighteenth-century gentleman’s waistcoat, splendidly decorated with embroidery and lace, will be part of the lace presentation. The alterations made to this waistcoat in the nineteenth century show that it is possible to extend the life of a beautifully made article of old clothing. It is also in keeping with the current call for more sustainability when it comes to attitudes to clothing and home furnishings.

Another piece that tells a story is the benediction velum with the Instruments of the Passion, a piece of cloth made with the techniques of bobbin lace and lacis (lace made by darning patterns on net). A remarkable and exceptional fact is that this piece is dated. Not only does it bear the year 1599, but it also displays initials and escutcheons, which have been identified. They appear to belong to an abbess and sister of the Spermalie Convent (Sisters of the Infant Jesus), which had been founded several years earlier within the town walls of Bruges. The sister in question was miraculously cured of the palsy; the documentation of the investigation into this case is still preserved in the Rijksarchief (National Archives). It is also interesting to see how a piece of textile can help to illustrate the “cloisterization” of the city of Bruges in the sixteenth century, a subject that is explored elsewhere in the museum. A piece that tells such a story is a thought-provoking digression in this fashion room. 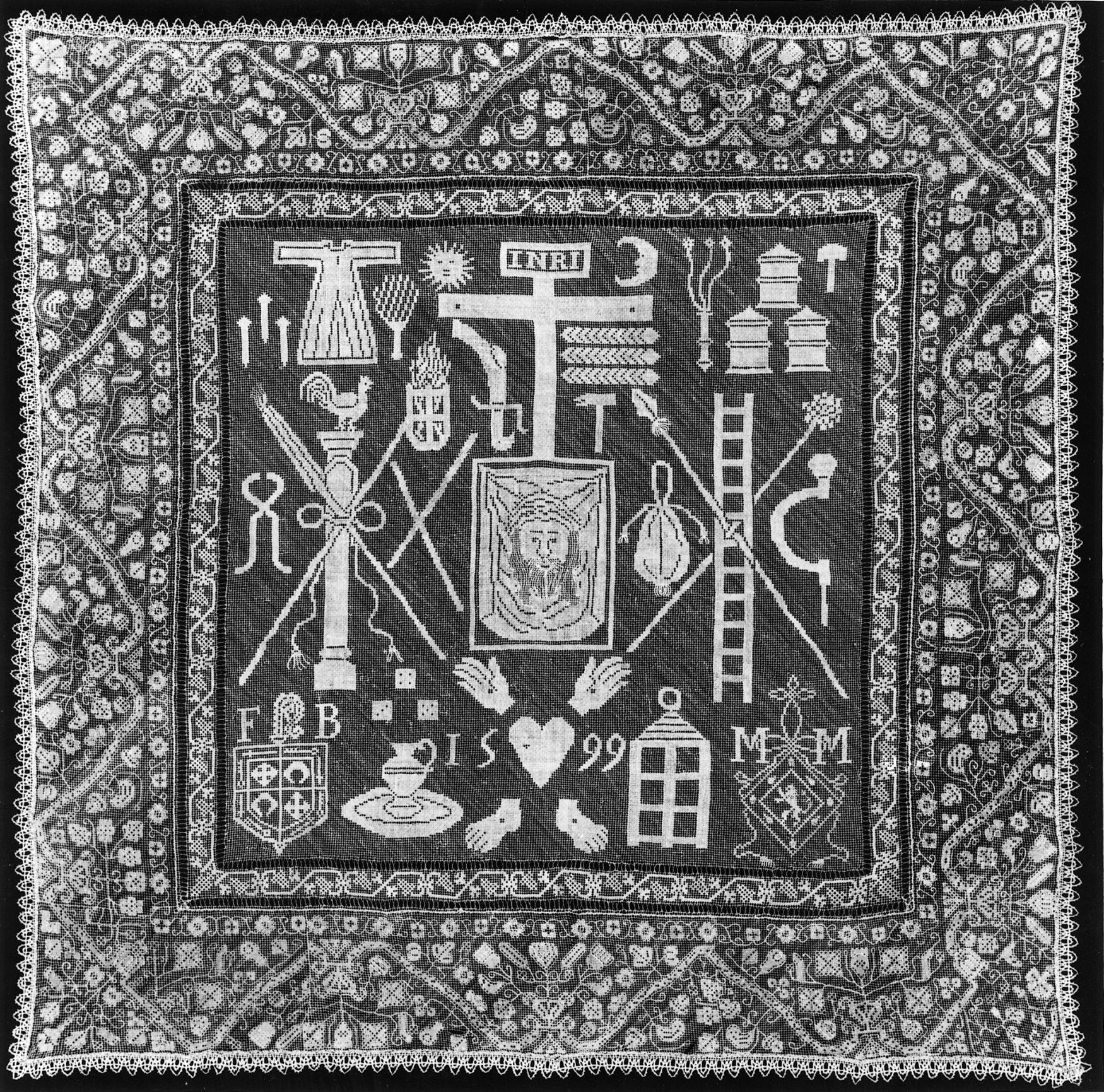 Benediction Velum with the Instruments of the Passion, 1599 Gruuthusemuseum, Bruges

What is the state of contemporary lace-making in a lace town like Bruges, where members of various societies and those attending training courses engage creatively with this technique every day? The city project ‘Kantlijnen’ (2007) gave rise to a dialogue between traditional lace and contemporary lace, design and fashion. At the Gruuthusemuseum, the collection of historical lace was confronted with the work of young fashion and product designers. The exhibition ‘Kantje boord’ (2014) at the Volkskundemuseum (Folklore Museum) was the result of a collaborative effort with the local institutions offering instruction in lace-making. Both of these perspectives will be integrated into the presentation of the new Gruuthusemuseum, thus bestowing the lace and textile room with modern-day dynamism.

This dynamism will continue throughout the completely renewed Gruuthusemuseum. At the moment, the museum is still in the midst of thorough restoration and radical changes to the (re)installation of the collection, which will turn both the museum and the surrounding site into a place where cultural heritage and innovation come together. The beginning of Gruuthuse Palace as a museum was marked by a lace presentation in 1889 and an exhibition of applied art in 1902. This edifice thus houses a long tradition, the principles of which are fully incorporated in the new museum concept, which rests on the following three pillars. 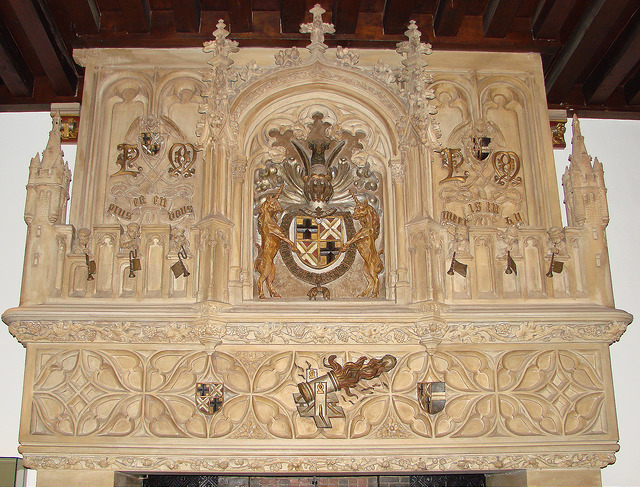 The ornate fireplace in the Hall of Honor of the Gruuthusemuseum, 19th century
© Sarah Bauwens

The first pillar is the Gruuthuse Palace as a monument. The perception of this Burgundian palace – with its many rooms and winding staircases, and its rich finishing and polychromy – will also be reflected in the scenography, which will radiate a warm atmosphere. The second pillar is the valuable Gruuthuse collection: objects of applied art, connected with this palace for more than a century, are integrated into the presentation of paintings from the Groeninge collection, manuscripts from the Bruges heritage libraries and archival documents. The lace and textile room is a fine example of this integrated approach. Finally, the presentation of the objects is as significant as it is innovative. Throughout the museum, objects take on meaning in the context of the history of Bruges, which constitutes the third pillar. The timespan runs from the heyday of the late Middle Ages to the revival of Bruges around 1900. That chronology is set by the narrative related by the objects in the collection. Nevertheless, the modern-day city also receives attention, thanks to the dynamic effect of the whole. The story thus comes full circle, because the narrative line is inherent in the building itself, which has gone from being the Burgundian palace of the nobleman Louis de Gruuthuse to serving as a pawnshop (House of Mercy), only to assume the role of a museum after the substantial renovations carried out at the end of the nineteenth century.

A new element is now being added to the narrative. In the renewed Gruuthusemuseum, the collection will take on meaning in a historical context, but the museum also seeks to remain relevant to present-day visitors and the city of today. On its historic site – with the Gruuthusehof and the adjacent Onze-Lieve-Vrouwekerk (Church of Our Lady) – modern visitors’ facilities will function as a new architectural beacon in the city and serve to unite the old and the new. We look forward to the new elan of the Gruuthusemuseum and its festive reopening at the end of 2018!

Aleid Hemeryck is Curator at the Gruuthusemuseum, Musea Brugge in Bruges. She has been a member of CODART since 2012.

Inge Geysen is Assistant Curator at the Gruuthusemuseum, Musea Brugge in Bruges.