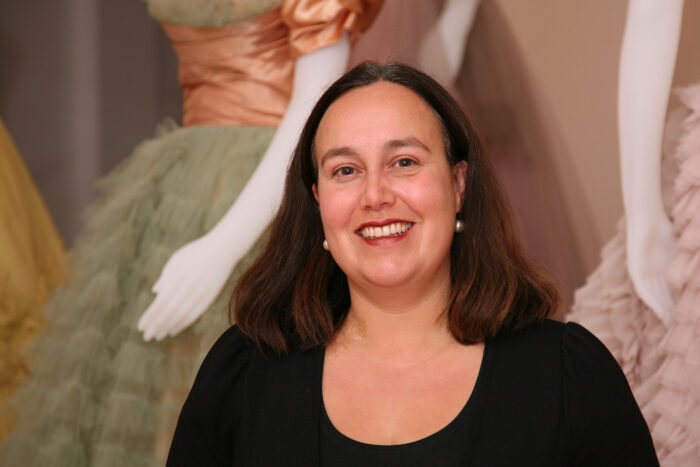 As curator of the collection of Fashion and Costumes at the Gemeentemuseum in The Hague, Madelief Hohé is responsible for one of the largest and most prominent collections of Western fashions in Europe. She studied art history at Leiden, at that time the only Dutch university that offered a specialism in the applied arts. One of her instructors there was Professor Irene Groeneweg, still an eminent specialist in the field of costume history. This course of study was a very conscious choice on the part of Hohé, who had been inspired by her visit to an exhibition at the Musée Galliera in Paris when she was sixteen. In those days there was little interest in costume in the Netherlands, and it was seldom the subject of exhibitions. In Paris she saw that things could be different: “That was a real eye opener, and a good reason to study in Leiden.” After receiving her degree from Leiden University, Hohé took up an internship at the Metropolitan Museum of Art in New York, after which she began working at the Gemeentemuseum on a project-by-project basis. She was eventually given a permanent job as collection assistant and later appointed to the position of curator. At the Gemeentemuseum she has realized a number of large projects, including the recent exhibitions Hubert de Givenchy – To Audrey with Love (2016) and The Chanel Legend (2013-14).

The Gemeentemuseum’s costume collection is one of the largest in the Netherlands. How many objects does it contain? What are the challenges of curating such an extensive collection?

We’re not sure of the exact number, but our holdings comprise over 50,000 objects, including more than 15,000 fashion prints and drawings. The size of the collection is a plus point as far as I’m concerned. It’s a great privilege and a wonderful opportunity to work with such a large a varied collection. Of course there’s always room for improvement, but actually you should look at it as a work in progress, with priority given to the core collections, which contain the most important pieces. 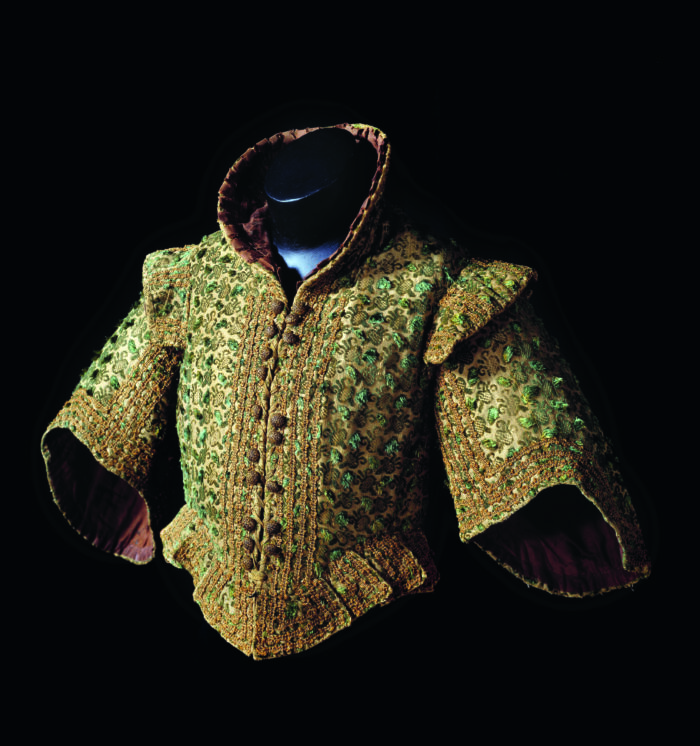 The focus of the collection is on costumes and accessories from the second half of the eighteenth century, but you also have pieces from the period before 1750. What are the highlights of these sub-collections? Could you single out a piece or two and tell us why they’re important?

Our collection includes complete costumes from around 1750 and onwards for men, women and children, as well as single items of apparel, accessories, fashion prints and drawings from ca. 1600.

The earliest pieces in our collection date from the late sixteenth and early seventeenth centuries. They are relatively few in number compared with later periods, and there are no complete costumes, only individual items such as a single glove or a doublet. Complete figures can be presented only from the second half of the eighteenth century onwards.

A large part of our collection is accessible via Modemuze, linked to Europeana Fashion, where you can see a few of the earliest pieces from our collection.

Do we know anything about the original owners, the people who first wore these oldest pieces of clothing? How much is known about the provenance of the items in this sub-collection?

We generally know very little about where these pieces came from. The earliest collectors attached little importance to the origin or provenance of these articles of clothing. Their intrinsic value was the prime consideration; where a piece of clothing came from, who made it, and who had worn it was of little importance. The scholarly approach that is now common, including our interest in the provenance of these objects, was unfortunately unknown in those days. 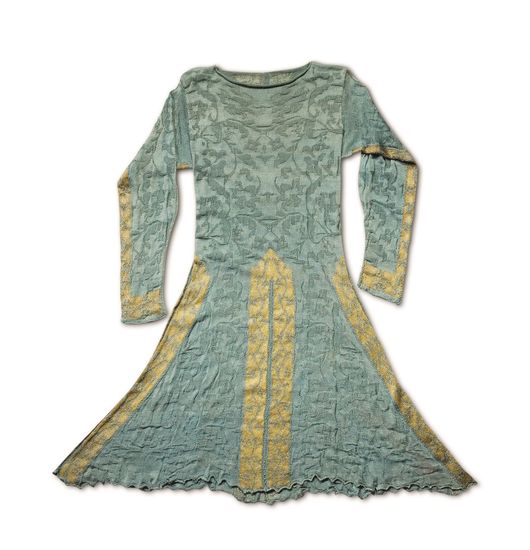 Knitted man’s jacket dating from rather late in the seventeenth century (photographed from the back). Remarkably, this garment was never worn, as shown by the sleeves, which are still sewn shut.

What are the specific challenges in exhibiting costumes?

All of our costumes and accessories are fragile. We are very selective with regard to the pieces we display, precisely because of their fragility. One difficulty is not always being able to judge how an article of clothing will react to being taken out of storage. You have to look at it like this: whenever we remove pieces from the depot to show them to the public, we are turning a two-dimensional object into a three-dimensional presentation. That inevitably puts a strain on the object. Then it’s a question of weighing up the situation: how important is it to display this piece within the framework of that particular project? The same is true of works on loan. The institutions that ask us to lend them pieces from our collection must comply with the strictest norms of climate and lighting control. In principle, the requirements are the same as those stipulated for prints and drawings (50 lux).

How do you and your staff treat the objects you present in the Gemeentemuseum? You must uphold equally high standards, I assume. Does this mean that the most important pieces usually remain in the depot?

No, not necessarily. We look at this piece by piece. The difficulty is not knowing what effect our actions will have on the object in question. When a piece has been restored, for example, the material around the restored area can suffer damage when the item is taken out of the storage box and presented to the public. In general, you can say that eighteenth-century pieces are fairly strong and in relatively good condition, in contrast to pieces from around 1900, the fabric of which is often of much lesser quality. Naturally this influences the manner of presentation. In some cases you can opt for “flat presentation,” for instance, whereby we present the clothing as though in a coffin, so that it suffers less stress.

How important is the presentation and the question of mannequinage (i.e. presenting the clothing on a dummy, or mannequin). I imagine that you don’t always know exactly how certain items of apparel were worn. What do you do if there is no visual or written documentation to go by?

The main thing is to listen to the piece of clothing. This might sound crazy, but it stands to reason: once you start examining a piece, you often realize automatically how it works. It falls into place by itself. 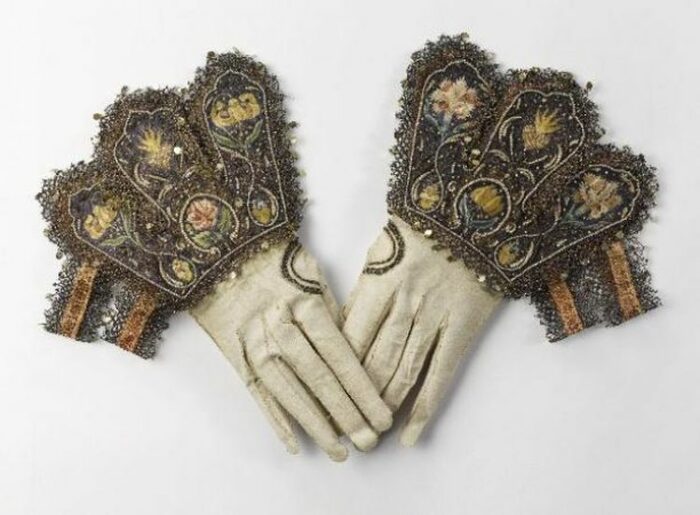 A certain amount of caution is called for, moreover, as regards the relevance of visual sources to the original functioning of the costumes. Nineteenth-century fashion prints, for example, are not at all true to life; such prints were like the “photoshop” of today. If you use these prints as the basis of your presentation, you end up with a distorted picture: the waist is often inordinately accentuated, the skirt made to look extra wide, so it’s important to take that into consideration. It’s best to proceed from the article of clothing itself, to listen to it and feel what works best. Everything depends on good mannequins that are adjustable in height, so that they can be adapted to the period in which the garment was made. The mannequin serves the clothing, not the other way around. Just as the mannequin is adjusted to fit the costume, the costume was originally adjusted to fit the proportions of its first owner. This quest enables you to come closest to the original wearer – altogether a fascinating process.

An appropriate example is a dress that needed restoration. Our restorer was having trouble finding the correct fit, until she had the idea to attach a small cushion to the mannequin’s stomach, and the whole dress appeared to fall into place. The wearer was pregnant, it seems, and the tailor had designed the dress with a view to concealing her pregnancy: her round belly was visible only from the side; looking at her from the front, you couldn’t tell she was pregnant. This made-to-measure quality actually holds true for all costumes. You have to listen to the garments and let them tell you their story. Over the years we’ve learned a great deal about mannequinage. We also have an army of mannequins, which aren’t always easy to stow away but are certainly good to have in store. 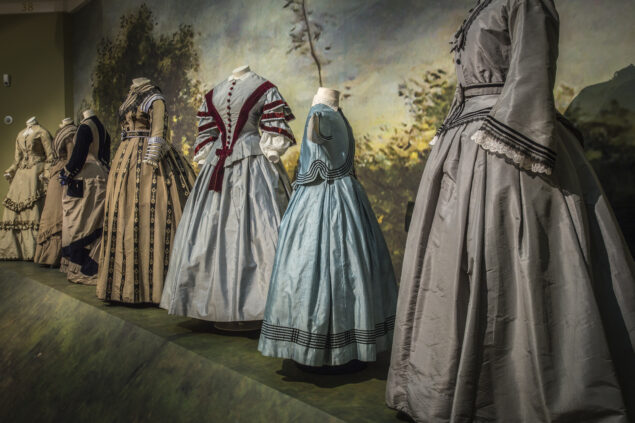 One last question, if I may, about the meaning and the ‘reading’ of costumes in visual sources. I’m under the impression art historians not specialized in costumes – which includes myself and most of the members of CODART – frequently miss things. We see depictions of clothing but often fail to notice their significance, because we can’t ‘read’ them. For example, visual artists of the late Middle Ages and the early-modern era sometimes portrayed figures in old-fashioned or archaizing clothing, as seen in Marinus van Reymerswaele’s Tax Collectors or the well-known print after Bosch’s The Blue Barge. In these works the reference is rather blatant, but there are certainly more subtle allusions in other artworks that are not obvious to us. What do you, as a specialist, think about this?

I couldn’t agree more. Sometimes I despair at the thought of how little we actually know. Just think of all the small codes we now take for granted and understand immediately: what your hair looks like, which shoes you’re wearing, etc. Things were certainly no different in the early-modern period. It’s a great pity that often we no longer know how to ‘read’ such nuances. With regard to early-modern times, travel accounts are a welcome source in this context. Travelers often jotted down things they observed, things that were different from what they were used to at home. Different modes of dress are among the first things travelers notice, so these accounts can teach us a lot. Costume books are another good source, but here, too, there are many subtle layers of meaning that modern-day viewers can no longer detect. I think that an interdisciplinary approach to the sources could be of help. Perhaps this interview should serve as an appeal for more collaboration between costume historians, iconographers, social historians and other specialists.

Madelief Hohé is Curator at the Gemeentemuseum in The Hague.

Katrien Lichtert is Curator at the Museum van Oudenaarde en de Vlaamse Ardennen in Oudenaarde, Belgium. She has been an Associate Member of CODART since 2016.