In 2017, Sheldon and Leena Peck donated their collection of drawings to the Ackland Art Museum at the University of North Carolina in Chapel Hill. At the heart of the collection is a large number of seventeenth-century Dutch drawings, many by major artists, including several significant sheets by Rembrandt. While already known to some, the Peck Collection has been long overdue for greater exposure.

Sheldon (1941-2021) and Leena (1945-2019) lived in the Boston area and collected steadily over the course of 40 years after initially being inspired by a seminar on drawings connoisseurship at Harvard University led by Konrad Oberhuber. Since Sheldon was a native of North Carolina and had studied at Chapel Hill, they thought it fitting to donate the collection to the Ackland Art Museum, where it now stands as one of the best collections of such material held by an American institution. It sits fittingly alongside top impressions of Dutch and Flemish prints assembled there by the now-retired curator Timothy Riggs, as well as the handful of early modern Dutch and Flemish paintings held by the museum.

A selection of landscape drawings from the Peck Collection toured in 1999-2001, accompanied by the catalogue Fresh Woods and Pastures New, authored by Franklin Robinson. While landscape drawings were certainly a passion of the Pecks, the collection also contains strong groups of figure studies, genre imagery, and portraits. Many of these works receive their first substantial study in the present exhibition and catalogue. Excepting important entries found in auction catalogues in which some of the works first came to light, a remarkable number of them remained unpublished until now, including drawings by Jacques de Gheyn II, Jacob Matham, Andries Both, Govert Flinck, Gerard ter Borch II, Frans van Mieris, Egbert Lievensz van der Poel, Thomas Wijck, Anthonie Waterloo, Constantijn Huygens II, and Cornelis Dusart. 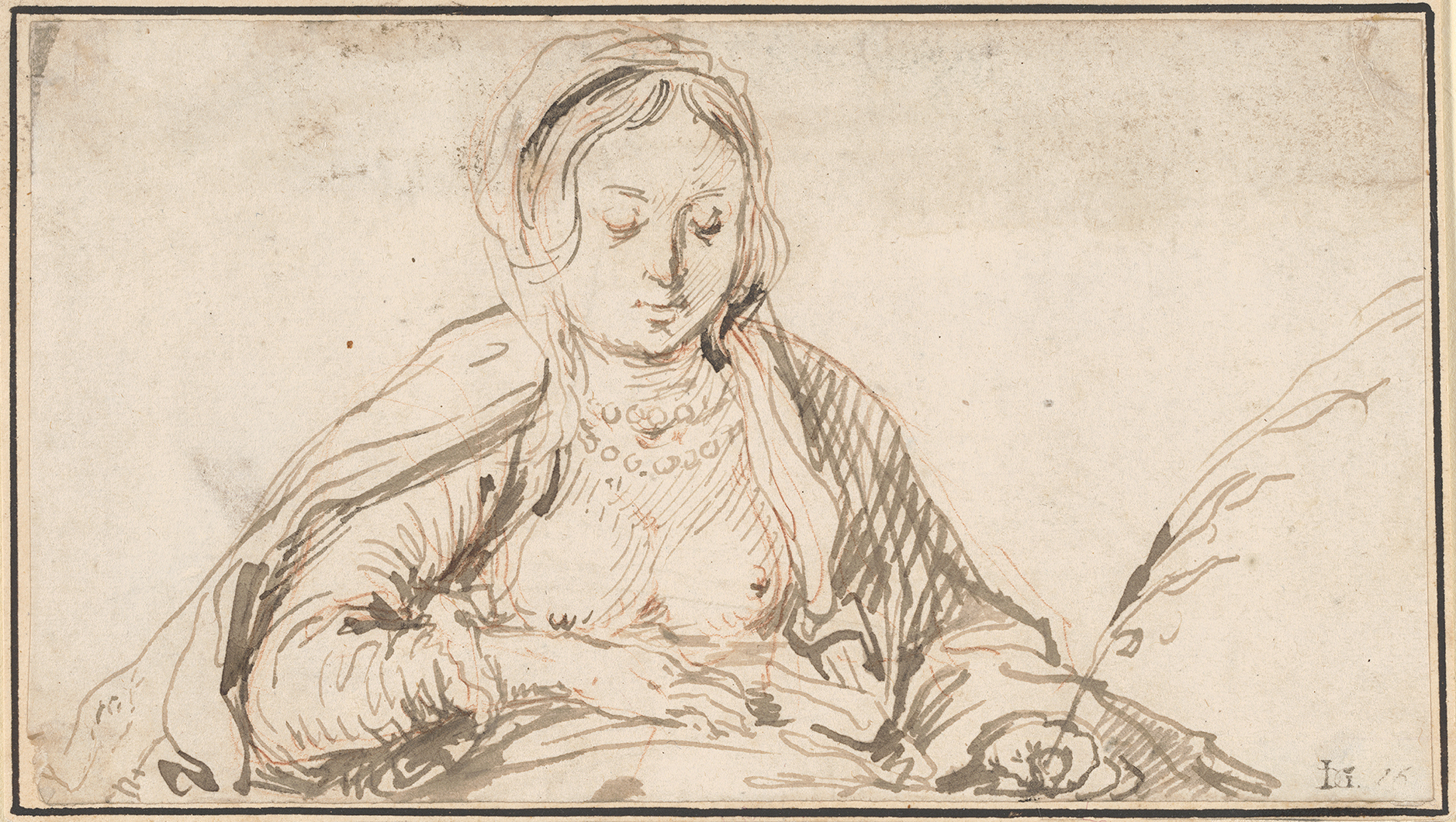 The catalogue for the present exhibition, Drawn to Life: Drawings from the Age of Rembrandt from the Peck Collection at the Ackland Art Museum, features 67 drawings from the collection, including five sheets by Rembrandt, which represents around half of the total gift. Entries for the remaining drawings in the collection, mostly Dutch and Flemish works from the sixteenth to nineteenth centuries, will be published online in the coming months in a recently launched digital collection catalogue dedicated to the Peck Collection. The online catalogue already features a complete set of entries, images, and texts from the present exhibition catalogue, accessible at: https://peck.ackland.org.

The Pecks also left a substantial endowment to the University of North Carolina for a curatorial post, funds for future acquisitions, and for continued research into their collection. Shortly after the collection was donated to the museum, I was engaged as an outside researcher to write the catalogue and to help prepare the present exhibition, which was co-curated by Dana Cowen, the inaugural Sheldon Peck curator of European and American Art before 1950 at the Ackland Art Museum. Much of this research and writing was necessarily carried out from afar during the pandemic. Still, we managed to attempt a few new directions in technical research, specifically into watermarks, the study of which was a long-standing passion of the Pecks, who were both orthodontists and quite familiar with radiographic imaging techniques. The multiple essays on watermarks in the Fresh Woods catalogue remain highly informative. For the present exhibition, Noelle Ocon, a conservator at the North Carolina Museum of Art, who sadly passed away in 2020, experimented with a transmitted infrared imaging technique that proved effective for capturing a number of new watermark images. Another collaborator was Charles (Rick) Johnson, professor emeritus at Cornell University, who has recently developed powerful digital tools to aid in the identification of watermark matches with other works of art or archival documents. This resulted in a number of discoveries, including proof of an exact match between two drawings by Rembrandt. 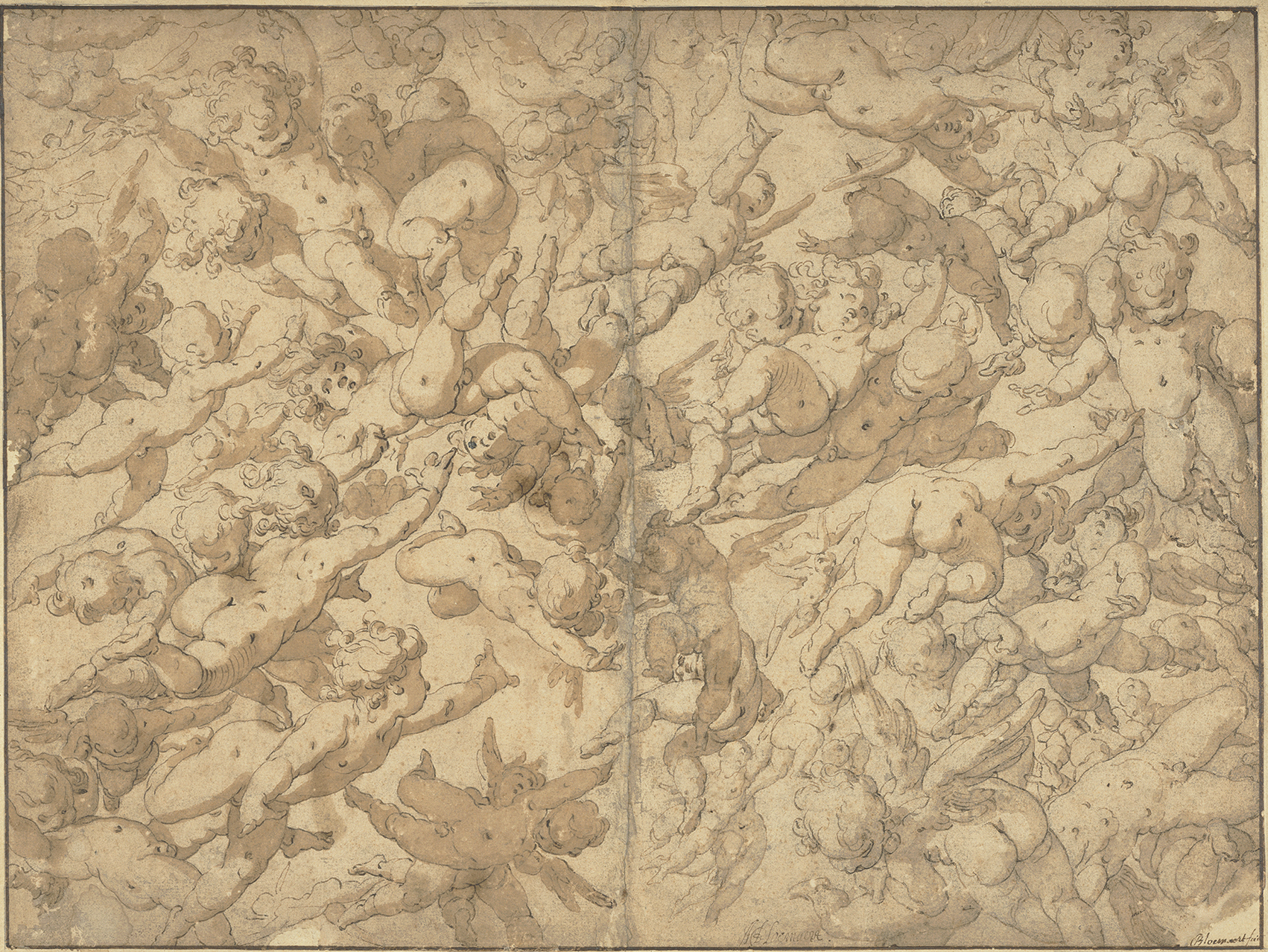 Among the collection’s many notable highlights are two drawings by Jacques de Gheyn II. One is the Young Man Writing at a Table, formerly in the Van Regteren Altena Collection, showing the artist portraying his son making a drawing (wittily signed De Gheyn inv). The other is his previously unpublished Sorceress Writing with a Quill Pen (fig. 1), a work that can be added to the artist’s intriguing repertoire of witchcraft imagery. It appears that this left-handed sorceress is studiously writing or copying a grimoire or spell-book, unusual and possibly unique in the surviving iconography of the era. Grimoires could only be hand-written and were never printed (due to their illicit nature), as De Gheyn was well aware.

Technical research and conservation carried out for the exhibition also yielded noteworthy results. The removal of the backing sheet from Abraham Bloemaert’s exuberant Studies of Putti (fig. 2) revealed previously unknown sketches that must be primi pensieri made around 1648-50 for a frontispiece engraving in his famous Tekenboek. Because the recto drawing dates to a much earlier phase of the artist’s career (ca. 1590-95), the verso sketches reaffirm the sheet’s status as studio material held for many decades, likely as part of his studio’s atlas thesaurus. 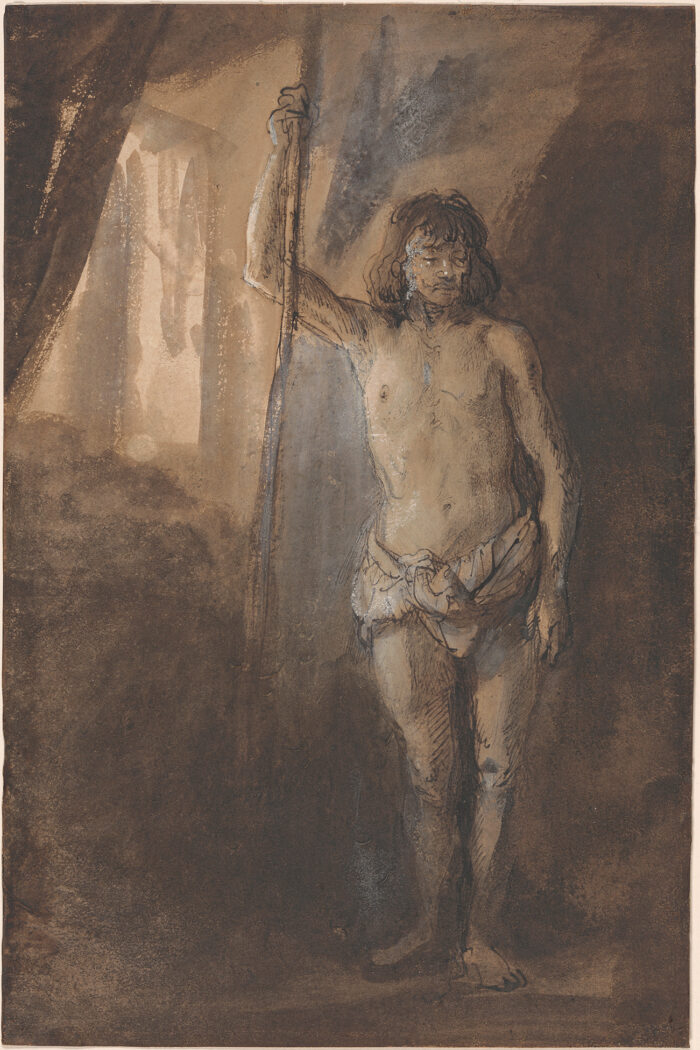 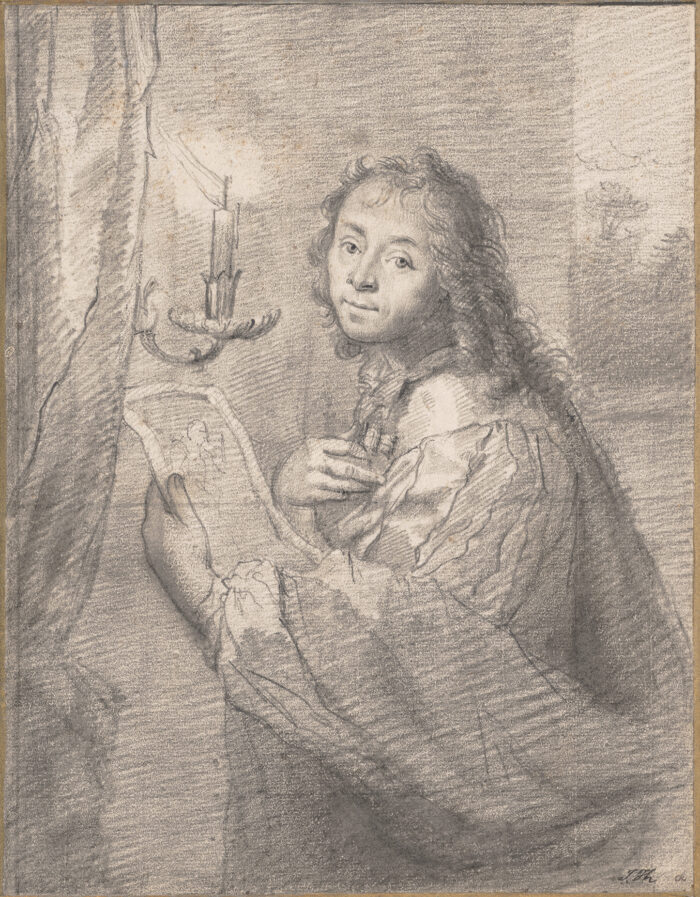 In the period before internet browsing made auction searching exponentially easier, the Pecks had a knack for spotting interesting material in out-of-the-way places, and some of their most significant drawings came from otherwise easily-missed sales. One is Samuel van Hoogstraten’s Study of a Male Nude Holding a Staff (fig. 3) from a Swedish collection, one of his large academic nudes using the pen and wash style preferred by Rembrandt and his pupils. Another is Godfried Schalcken’s Self-Portrait (fig. 4) that appeared at auction in Monaco, and clearly relates to his famous painting in the Uffizi commissioned by Grand Duke Cosimo III de’ Medici. It is presented here as the vidimus for the painting. Christiaan Josi included a print of this drawing in his 1821 Collection d’imitation de dessins, one of the first books to reproduce a selection of European drawings as exemplars of the medium. 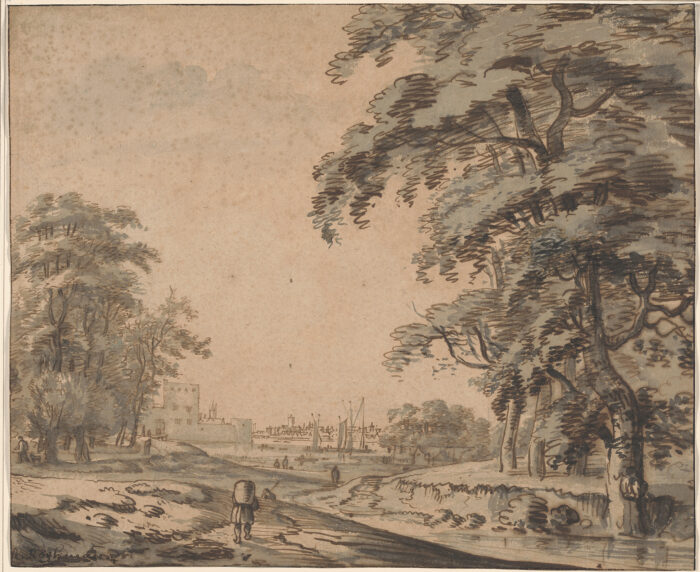 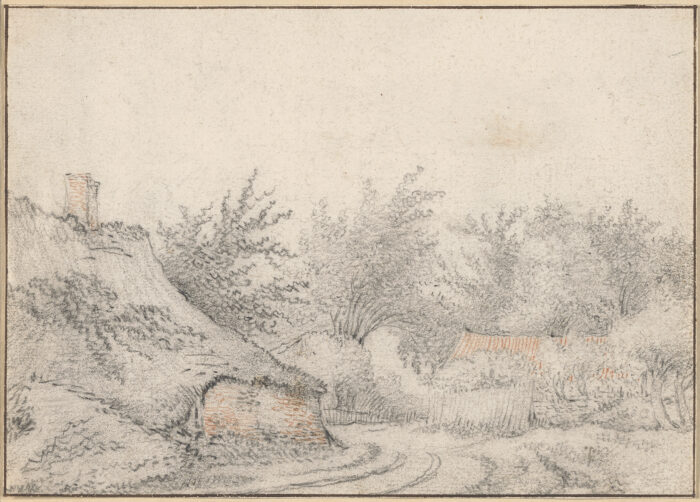 The taste of the Pecks, if one were to attempt to define it, was not confined to certain genres or styles, but rather to the inherent qualities of the images as artworks. This approach resulted in an assembly of landscape imagery, to take one of their favorite genres, that includes some of the best works by both known and relatively unknown artists. Sheets by Roelant Roghman (fig. 5), Jan Lievens, Pieter de Molijn, Adriaen van de Velde, and Willem Schellinks, for example, stand among the most appealing drawings these artists ever produced, as does the rare and early Herman Saftleven made when he was still under the spell of Willem Buytewech. Possessing equal visual power, however, are drawings by lesser-known artists such as Willem Romeyn, Herman Naiwincx, and Guillam Du Bois (fig. 6).

Rembrandt, finally, was the artist most admired by the Pecks. They avidly sought to acquire his drawings despite the inevitably fierce competition for them when they appeared on the market. Through their gift, the Ackland now possesses five drawings that can securely be attributed to Rembrandt, and a few others that bear uncertain attributions but nevertheless remain vital for the ongoing study of this complicated area of connoisseurship. The secure works include a black chalk figure study that was likely preparatory for the so-called Hundred Guilder Print; the Studies of Women and Children with his own inscription (thus a ‘core’ work) describing the head covering of the infant (fig. 7); a powerful landscape showing a canal and boats taken from life on the outskirts of Amsterdam that contains virtuosic passages with both pen and brush; and a sublime Noli me tangere (fig. 8), one of the most moving drawings by Rembrandt to reach a public collection in recent memory. 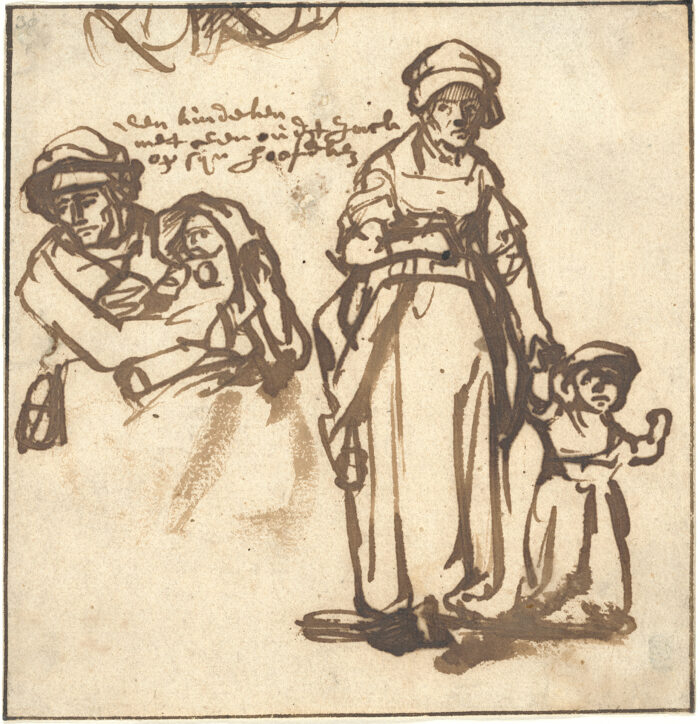 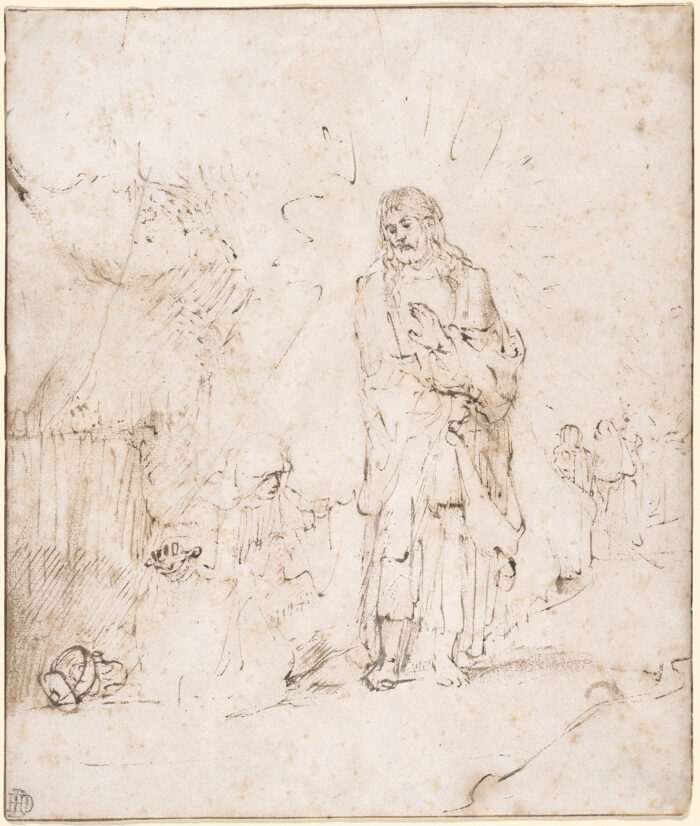 The exhibition in Chapel Hill is organized around five themes: Artists at Work, The New Landscape, Rembrandt and His School, The Traveling Artist, and Mirror of the Everyday. When it comes to the Rembrandt House Museum in Amsterdam next spring (March 18—June 11 2023) a new arrangement of the material will be presented.

Robert Fucci is Peck Collection Research Fellow and Guest Curator at the Ackland Art Museum in Chapel Hill, North Carolina. He has been an associate member of CODART since 2014.