Among the longstanding strengths of the National Gallery of Art’s collection of works on paper are prints made by Northern European artists active in the fifteenth and sixteenth centuries. Thanks to a series of foundational gifts by the collector Lessing J. Rosenwald (1891-1979) and the generosity of subsequent donors, the national collection boasts extensive holdings of prints by Martin Schongauer (ca.1430-1491), Albrecht Dürer (1471-1528), Lucas van Leyden (ca.1494-1533), Hendrick Goltzius (1558-1617), and their printmaking contemporaries. This area of the collection continues to grow through selective acquisitions that enable the National Gallery to tell new stories and highlight the many ways in which prints were created, used, and appreciated in early modern society. 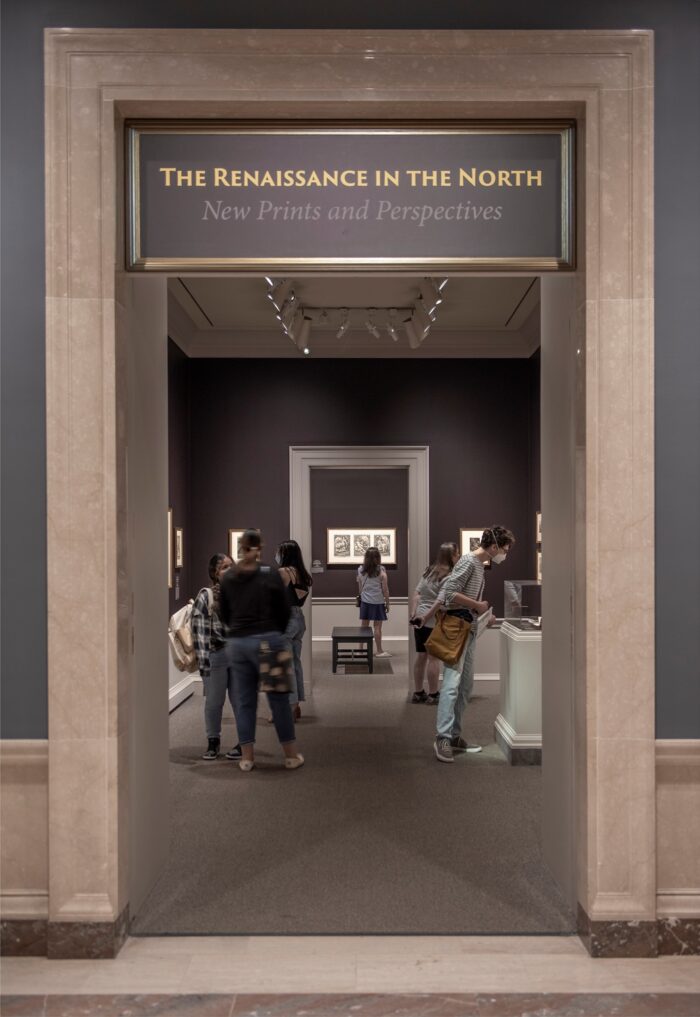 Fig. 1. Entrance to The Renaissance in the North: New Prints and Perspectives
Photo: Rob Shelley

The exhibition The Renaissance in the North: New Prints and Perspectives—which opened in Washington, DC, on 3 July 2022—showcases a selection of the most exceptional Northern Renaissance prints acquired by the National Gallery over the past decade (Fig. 1). From small devotional compositions to oversize genre prints intended as wall decorations, the works in the show exemplify the innovation of graphic artists working north of the Alps who embraced prints as vehicles for visual experimentation, self-promotion, and collaboration. Although intimate in scale, the exhibition offers an expansive view of the printed multiple and its formal and functional variety in the period. The installation aims to introduce general audiences to some of the key artists, themes, and techniques of early printmaking. At the same time, the show offers specialists the rare opportunity to view exceedingly fine impressions of familiar prints—and unexpected rarities—that are not typically on view in the permanent collection galleries. The exhibition is made possible by a generous grant from the Eugene V. and Clare E. Thaw Charitable Trust.

The installation is divided into two sections that distinguish the works both chronologically and geographically. The first gallery comprises prints made by artists working primarily in Germany and Switzerland from approximately 1460 until 1550. Beginning with engravings, etchings, and woodcuts by seminal printmakers such as Master E.S. (active ca.1450-1467), Dürer, and Hans Lützelburger (active 1517-1526), the impressions on view demonstrate how, even in this early period, prints played a key role in preserving and broadcasting artistic style and individual and communal identity. Printed portraits multiplied a sitter’s likeness, carrying the fame of the subject beyond its physical place and time. Landscape prints romanticized the rugged northern topography. Savvy printmakers began to include their initials or full names within the image to declare authorship and promote their talents. 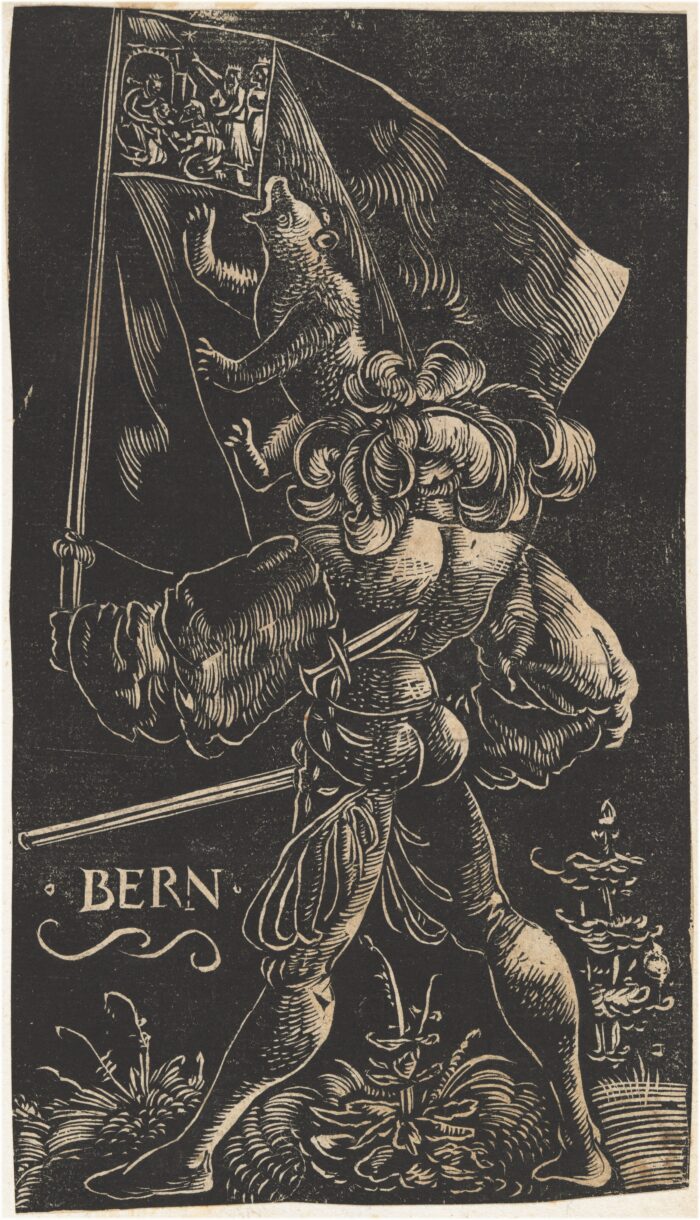 Among the rare and noteworthy prints in this gallery are several works that depict mercenary soldiers, reflecting pride in the region’s military might. A rare surviving iron etching plate by Daniel Hopfer (ca. 1470–1536) depicting Three German Soldiers Armed with Halberds from 1510 is installed beside an early impression of the print. The presence of this matrix by the pioneer of the etching medium helps visitors to visualize the materiality of the printmaking process, including the inherent reversal of the image from plate to paper support. Nearby, a striking white-line woodcut from 1521 by Swiss artist Urs Graf I (ca.1485–1529/1530) presents the Standard-Bearer for the Canton of Bern (Fig. 2). With his confident stance, billowing sleeves, and feathered hat, this extravagant figure is one of the sixteen standard bearers—each representing a different canton—from a series that expressed pride in Swiss independence. Graf himself had served as a soldier for hire, a fact that lends these prints a sense of autobiographical bravado. Here, the lines that appear white were carved into the woodblock before the remaining flat surface was inked, a bold and uncommon technique. This is only the second impression from the series to enter a public collection in the United States.

Anchoring this first gallery is a monumental woodcut depicting an Army Train and Death designed by Erhard Schön and printed ca.1532 from four blocks on four sheets of paper (Fig. 3). In contrast to Graf’s celebratory image, the print takes a decidedly moralizing perspective on the lives and exploits of these paid soldiers. This unstructured parade of German Landsknechte, distracted by their hangers-on, mimics the triumphal processions of ancient Rome, in which military leaders would celebrate victories and publicly display the spoils of war. Schön’s army train, however, contains a cynical surprise at its tail: Death and two attendants—a German mercenary and his Ottoman adversary—remind the viewer of the devastation that follows war, especially when soldiers act immorally. Large-scale mural woodcuts, a specialty of Nuremberg publishers in the 1530s, were pinned to walls as decorations and seldom survive intact, like this spectacular example.

The exhibition’s second section, which features engravings and etchings created by Netherlandish artists, aligns most directly with the primary interests of CODART members. This gallery surveys the range of increasingly sophisticated printed images created for an established international market of print collectors in the second half of the sixteenth century. The primary audience for these prints included intellectuals—including other artists—who pursued classical learning as a guide to personal improvement and collective ethics. Many of these prints depict themes of virtue and vice from the Christian Bible, classical mythology, and everyday life.

In this gallery, special attention is given to the collaborative nature of the period’s commercial printmaking process, in which professional printmakers translated designs by other artists onto incised metal plates for replication. The prolific Antwerp print publisher Hieronymus Cock (ca.1510-1570) provides a prime example of how publishers orchestrated the production of prints: financing the operation, disseminating the sheets, and reaping the primary profits from successful compositions. Five prints on view in the gallery were issued by Cock, including a famous sheet from the series Scenographiæ sive perspectivæ (1560) that depicts the publisher and his wife and business partner Volcxken Diericx (ca.1525-1600) posing at their shop, Aux Quatre Vents (Fig. 4). The ambitious and strategic diversity of Cock’s output as a publisher—which included ornament, landscape, and genre scenes—is evident in the installation. 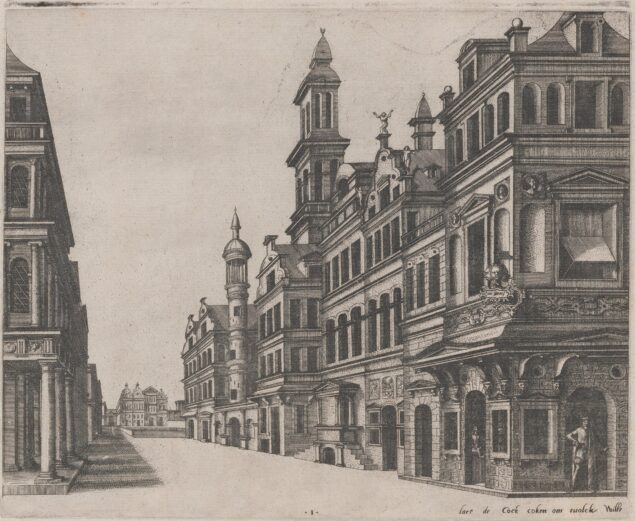 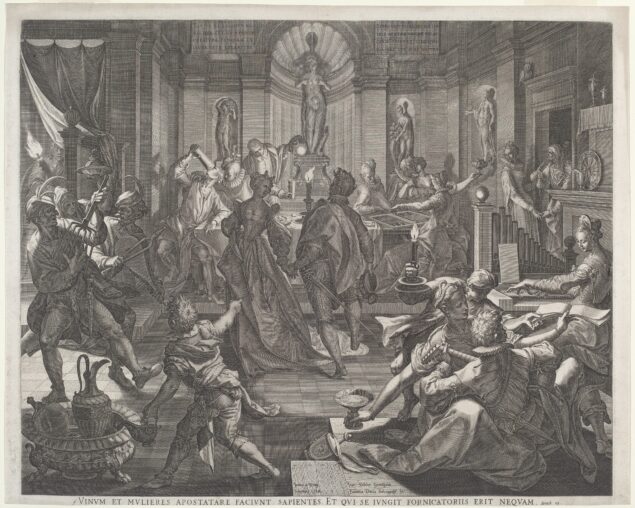 As many of the works in the exhibition demonstrate, a viewer’s engagement with these prints is often mediated by eloquent Latin inscriptions about the human struggle to lead a righteous life. An engraving by Jan Sadeler I (1550–1600) after a design by Joos van Winghe (1544-1603), for instance, offers a tempting invitation to step across the fictive threshold into a scene of candlelit carousing fueled by music and alcohol (Fig. 5). It is only after imaginatively entering the space and observing the intimate interactions between well-dressed couples dancing and playing games that we recognize this as an upscale brothel. A procuress collects money at the door on the right. This seductive print carries a moralizing message, inscribed in Latin, which warns the viewer about lust and overindulgence: “Wine and women will cause wise men to fall. He that cleaveth to harlots will be worthless.”

The exhibition culminates in a group of late-sixteenth-century allegorical and mythological prints by Northern Mannerist artists, most notably Hendrick Goltzius. His large-scale engraving after Raphael’s Roman fresco The Triumph of Galatea reflects the inspiration that Northern European artists drew from Italian Renaissance art and exemplifies his transcendent command of the reproductive medium. Nearby is Goltzius’s original series of Three Goddesses, which depict Minerva, Venus, and Juno, the protagonists of the Judgment of Paris, where the mortal Trojan prince must decide who is most beautiful. Each goddess is framed by the rewards that she grants: Minerva offers wisdom and skill in battle; Venus, romantic love; Juno, wealth and power. Collectors could purchase the prints as a set and play the role of Paris, evaluating the beauty of Goltzius’s compositions, but without having to choose just one. In the exhibition, the prints are framed and considered together so that viewers can judge Goltzius’s virtuosic engraved lines, and the goddesses, for themselves (Fig. 6).

In The Renaissance in the North: New Prints and Perspectives, we invite visitors to come closer to discover the unexpected depth and variety that defines this period of printmaking. Most of the sheets in the show have never been exhibited before in Washington and many represent the only impressions of the print in an American collection. In addition to engravings, etchings, and woodcuts by iconic artists, the exhibition features printmakers whose names have fallen into obscurity but whose works reward close looking. Even centuries after they emerged from the press, these prints convey the ambition, awe-inspiring skill, and collaborative spirit that fostered them. The exhibition will remain on view through 27 November of this year.

Brooks Rich is Associate Curator of Old Master and Nineteenth-Century Prints at the National Gallery of Art, Washington, DC. He has been a member of CODART since 2019.