This article was originally published in the CODART eZine, no. 0, Tefaf-Special,  Spring 2012.

The Mauritshuis will begin its ambitious plans to extend and renovate its historic city palace on the Hofvijver (Court Pond) in The Hague on 2 April 2012. The project will take about two years to complete, during which time important parts of the collection will be on display elsewhere, and so will remain largely accessible to the public. A selection of the museum’s highlights will be shown at the Gemeentemuseum in The Hague, a traveling exhibition will take a large number of masterpieces to Japan and the United States, and various groups of paintings will be lent to museums in the Netherlands and Belgium. The team of Mauritshuis curators, consisting of CODART members Quentin Buvelot, Epco Runia, Ariane van Suchtelen, Lea van der Vinde and assistant curator Geerte Broersma, have been working hard to make these complex plans a reality. 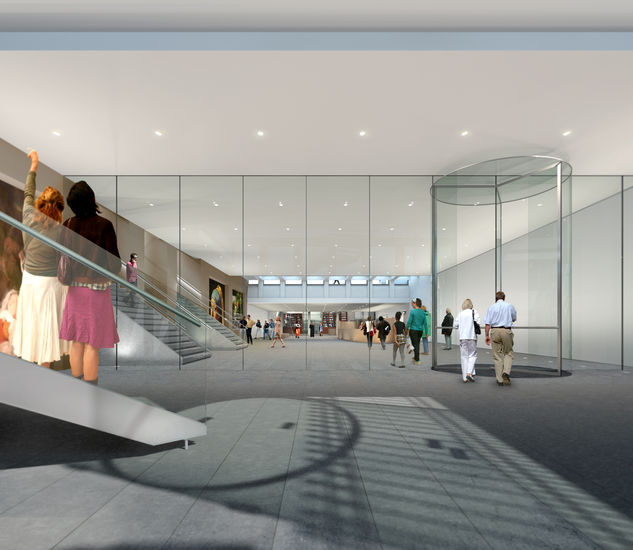 Building work will commence in the spring of 2012. An underground foyer will link the Art Deco building at Plein 26 to the seventeenth-century city palace. The design by the architect Hans van Heeswijk focuses on brightness and light; it does justice to the museum’s international stature while preserving the characteristics of its historic building. By doubling its surface area, the museum will be able to extend its facilities to include a new exhibition space, an auditorium for lectures and conferences, a library/documentation center and an educational area. The entrance to the underground foyer will be in the forecourt, and will provide access to both the city palace and the new wing. As a result, visitors will no longer have to use the service entrance. While work is being done on the extension, the old premises will be renovated. The “new” museum is expected to open its doors to the public in mid-2014.

Masterpieces at the Gemeentemuseum in The Hague 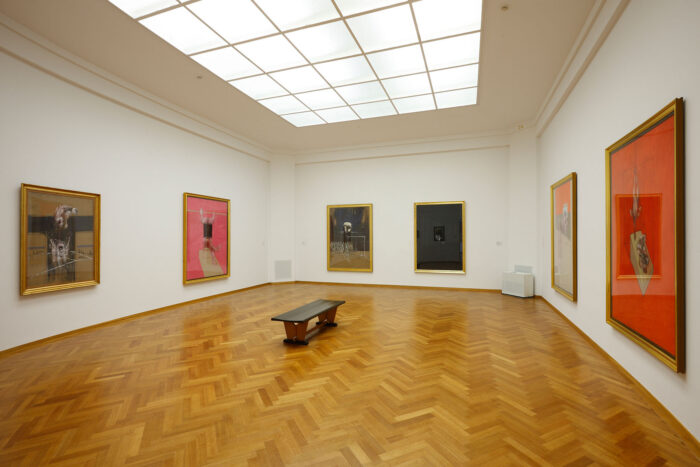 One of the exhibition spaces in the Gemeentemuseum, The Hague

More than one hundred masterpieces from the Mauritshuis will be exhibited in a separate wing of the Gemeentemuseum in The Hague from 24 April 2012 until the building project is completed. This will allow the core of the collection to remain on display in the city and to be shown under the same roof as the highlights of modern painting from the collection of the Gemeentemuseum. It will be a unique experience for both the public and the curators to see such famous masterpieces as Vermeer’s View of Delft, Rembrandt’s Anatomy Lesson and The Bull by Paulus Potter in the sleek museum designed by the architect H.P. Berlage, rather than in the intimate, domestic atmosphere of the Mauritshuis. This will literally shed new light on our Old Masters, since the Gemeentemuseum has pitched glass roofing, which allows daylight to enter through glass ceilings which are covered with translucent veils that direct the light to the walls.

A number of paintings, including Vermeer’s Girl with a Pearl Earring and The Goldfinch by Carel Fabritius, will go on tour to Japan and the United States. The traveling exhibition will provide information about the history of the Mauritshuis and the building project, which will acquaint a large international public with the Mauritshuis of the past, present and future. In the second half of 2012 nearly fifty works will be shown at two venues in Japan: the Tokyo Metropolitan Art Museum and the Kobe City Museum. Thirty of these paintings, supplemented by five others from The Hague, will begin their tour of the United States in early 2013, starting at the de Young Museum in San Francisco and continuing on to the High Museum of Art in Atlanta. To round up the tour, ten highlights from the traveling exhibition will be on display at The Frick Collection in New York: a special event, since both museums are known for their relatively small collections of extremely high-quality works. 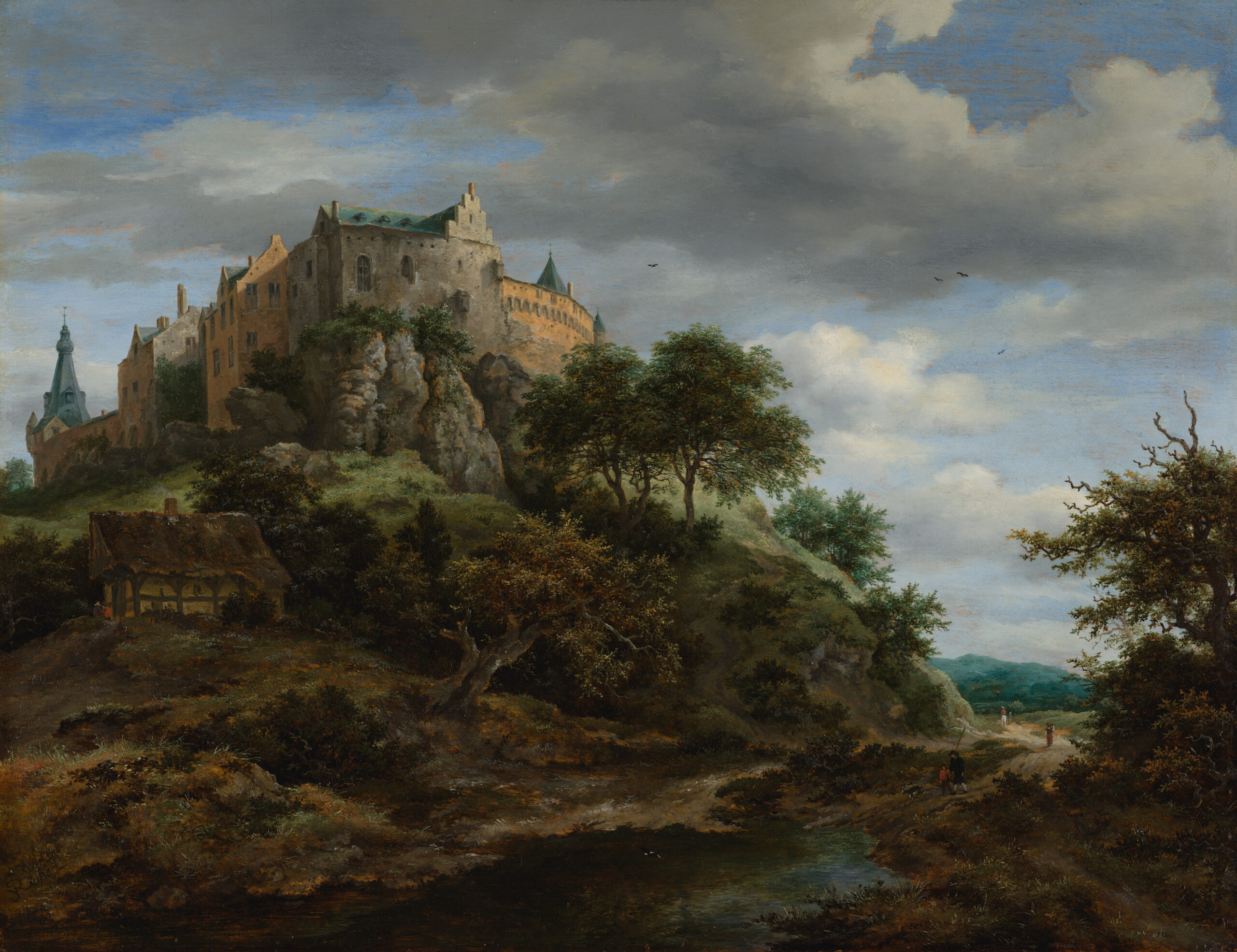 Closer to home, “ensembles” will be lent to museums in the Netherlands and Belgium. These groups consist of paintings (and in one case also sculptures) that form a cohesive whole and also fit in with the collection of the host museum. Amsterdam portraits will be lent to the Amsterdam Museum, art works related to the House of Orange will have a temporary home at Het Loo Palace, early Netherlandish paintings will spend some time at the Groeningemuseum in Bruges, and such Dordrecht masters as Aert de Gelder and Aelbert Cuyp will go to the Dordrechts Museum. The host museums will display these loans in various ways, either alongside their permanent collections or in special presentations. The Rijksmuseum Twenthe in Enschede, for example, is planning to organize an exhibition centered on a number of landscapes from the Mauritshuis, the focal point being Jacob van Ruisdael’s View of Bentheim Castle.

The temporary closure of the Mauritshuis will also provide an opportunity to carry out several large conservation projects that have long been pending. The renovation of the city palace will necessitate the temporary removal of nearly all the ceiling- and wall-paintings, which will be housed elsewhere for the duration, including the monumental paintings produced in 1718-1719 for the Golden Room by the Venetian artist Giovanni Antonio Pellegrini. These works may have been executed in the Netherlands, but are characterized by a typically Venetian panache and palette, and so represent something uniquely Italian on Dutch soil. During the closing of the Mauritshuis, Pellegrini’s paintings will be examined and treated. The progress of their conservation treatment will be made available via an interactive presentation in the Gemeentemuseum, a special website and social media such as Twitter. There are also plans to examine and conserve three richly decorated, seventeenth-century trophy frames, including the one now surrounding Ferdinand Bol’s portrait of Michiel de Ruyter. 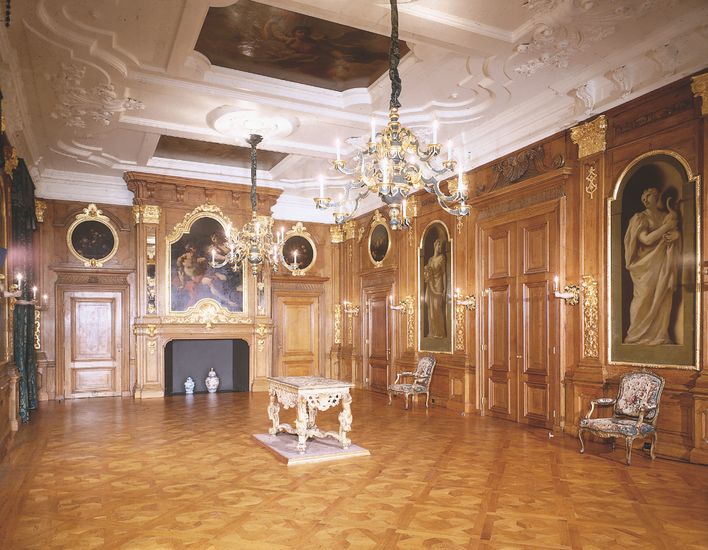 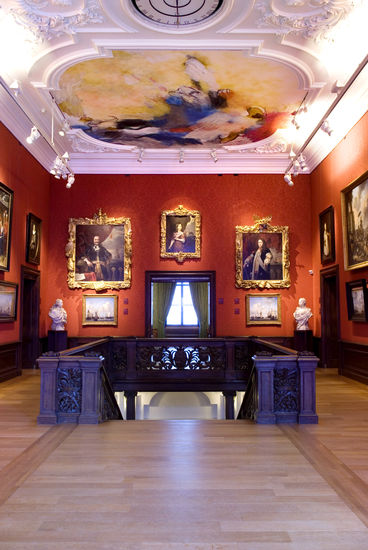 Seventeenth-century trophy frames in the Mauritshuis

We hope to welcome the public to the newly renovated and enlarged Mauritshuis by mid-2014. In the meantime, important parts of our collection will be available to a broad public. In addition, nearly 150 works from the Mauritshuis, including paintings by Jan Steen, Paulus Potter and Frans van Mieris, have been on permanent display at the Prince William V Gallery on the Buitenhof [fig. 6] since September 2010. This unique space offers visitors the opportunity to enjoy the atmosphere of the princely, eighteenth-century picture gallery that forms the basis of the present-day collection of the Royal Picture Gallery Mauritshuis. 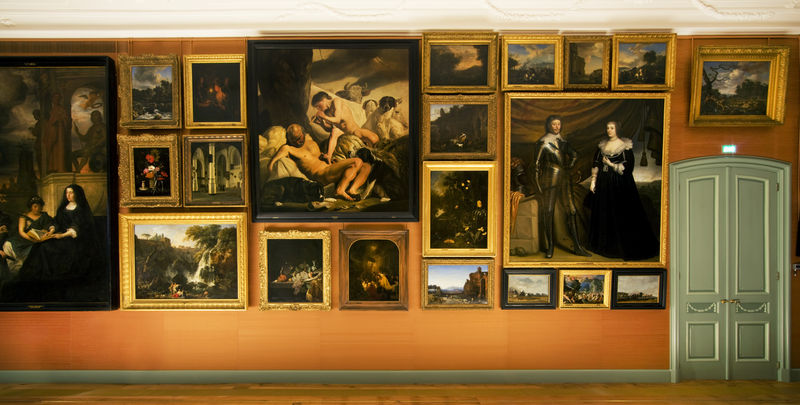 Interior of the Prince William V Gallery, The Hague

Edwin Buijsen is Head of Collections of the Mauritshuis in The Hague. He has been a member of CODART since 2005.