Is it possible to reconstruct the citadel on the basis of paintings, prints and drawings?

At a stone’s throw from the museum known as Het Valkhof is the park after which the museum is named. This was once the site of a proud medieval citadel where emperors, dukes and stadholders came to stay. After a period of decline and political unrest, virtually the entire Valkhof citadel was demolished in 1797.

Nowadays the St Nicholas Chapel and St Martin’s Chapel (also known as the Barbarossa ruins) remain as testaments to the hill’s illustrious past. Over the past century, there have been frequent calls for the citadel’s reconstruction. Since we have few precise details about the building’s façade, the various reconstruction initiatives tend to be based on the many depictions of the Valkhof citadel.

The Valkhof citadel was built on a hill during the rule of Holy Roman Emperor Frederick I or “Frederick Barbarossa” in the twelfth century. The citadel, with its thick walls and high tower, was built from tufa stone. Frederick I was not the first person to live on the site: in the eighth century Charlemagne had a palace built there on the remains of a Roman settlement. 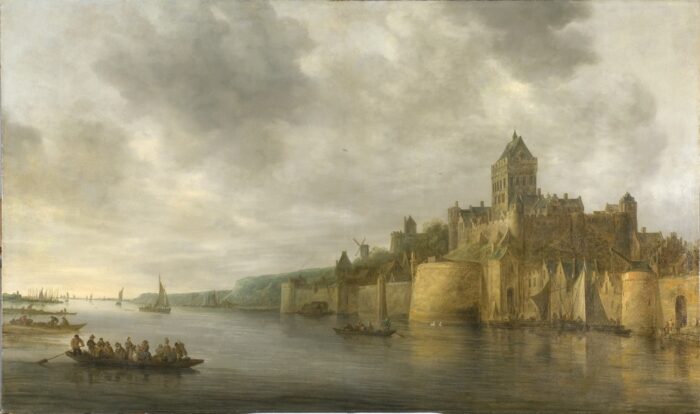 The Valkhof citadel was a major landmark in Nijmegen, depicted in countless paintings, prints and drawings. The best-known image is probably one painted by Jan van Goyen. Van Goyen came from The Hague and visited Nijmegen only twice. Nonetheless, in the two decades from 1633 to 1654 he depicted the Valkhof over thirty times. His views of the Valkhof citadel are not entirely correct, topographically speaking, but that did not stop them soaring to almost instant popularity. The scenes he painted included a view of the River Waal and the Valkhof citadel (1641) in front of the town hall – a work commissioned by the Nijmegen city council (fig. 1). To Van Goyen, the citadel towering over its surroundings was mainly an attractive picture, in which aesthetics mattered more than topographical or architectural accuracy.

Other landscape painters emulated Van Goyen’s pictures of the citadel. Some, like Aelbert Cuyp, made realistic, accurate sketches of the Valkhof during visits to Nijmegen (fig. 2). Others contented themselves with imitating Van Goyen’s composition without visiting the site themselves. Some of these imitations are wildly unlike the topographical reality. Recognizable elements such as the giant tower or donjon are emphasized or enlarged to achieve a beautiful cityscape. 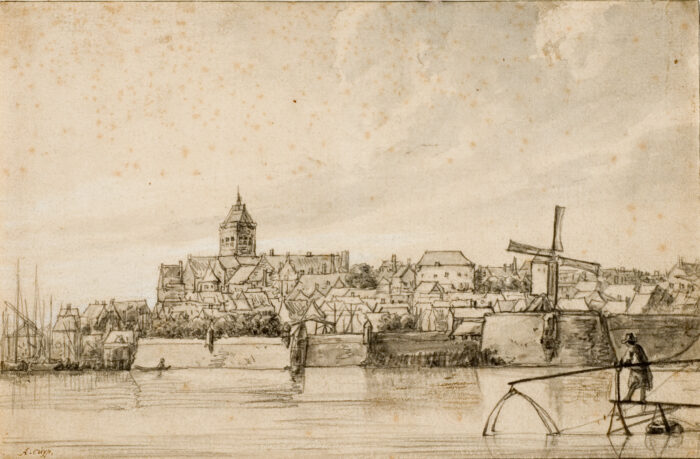 From citadel to city park

In 1797 it was decided that the dilapidated citadel should be demolished. The building was being eroded by thefts of tufa stone, columns, and other structural fragments. The Nijmegen politician Johannes In de Betouw vehemently opposed demolition and did his utmost to ensure the preservation of the two chapels. In this he was supported by the politician and artist Hendrik Hoogers, who immortalized the Valkhof in a series of drawings before it was torn down. In de Betouw and Hoogers took a particular interest in the chapels because they believed them to date from Roman times. By pressing this point home, they managed to spare the “pagan” chapels from demolition.

One of the reasons for demolishing the building was the large quantity of tufa stone that could be harvested. However, the political events of the late eighteenth century also played a role. Under the influence of the French Revolution, the Netherlands too was in the throes of a modernizing drive that meant a break with the past. The “imperial” Valkhof was seen as a symbol of the ancien régime.

With demolition looming, efforts were made – for the first time – to get the Valkhof classified as a protected historic building. This led to restoration work being carried out at the city’s expense: the chapels were turned into museums and the Valkhof became a lieu de memoire. After the citadel was eventually torn down, a city park was created on the site after a design by the landscape architect Johann David Zocher. The Valkhof Park, designed in the style of a romantic English landscape garden, was a place in which to meditate about the city’s illustrious past. Poplars framed the silhouette of the Valkhof citadel. The chapels became silent witnesses to the grandeur in which the Valkhof had once bathed.

Hoogers had made drawings of the Valkhof when the citadel was still standing, but he also depicted the new park. In a watercolor dating from 1805 we see an idealized image of the Valkhof Park with the archeological discoveries that the demolition had unearthed. The loss of the citadel, whose demolition the artist had sought to prevent, is tangible. Hoogers’s image depicts the rich past of the Valkhof (fig. 3).

Starting in the twentieth century, plans were put forward for the rebuilding of the Valkhof citadel. The construction of the Waal Bridge in 1936 provided the impetus for an initial reconstruction plan. The Nijmegen architect Charles Estourgie proposed that as a counterpart to the modern bridge, the Valkhof citadel be restored and rebuilt. The pans were rejected at the last minute, because of fears of damage to existing structures and foundations. In 1949 the Catholic University was searching for new premises, after a large proportion of the university buildings had been destroyed in the war. The daily newspaper De Volkskrant launched a plan to rebuild “Charlemagne’s citadel.” The Catholic University could occupy premises in the new Valkhof citadel, using the donjon for its library and the St Nicholas chapel as its house chapel. However, the university decided instead to build a new campus outside Nijmegen city center.

The artist Cornelis Springer based his reconstruction of the Valkhof on the situation that existed in the Carolingian period. Springer painted an imaginary picture of the Valkhof in 1862, over sixty years after the citadel’s demolition. He relied on an eighteenth-century work by Cornelis Pronk, but refashioned the architecture of the buildings in an invented Romanesque style. Springer painted the ninth-century palace with Charlemagne in the courtyard. Depicted on the left is the St Nicholas Chapel, which was built some two hundred years after Charlemagne’s death. Clearly, this painting is intended more as an impression of the citadel’s illustrious past than as a serious reconstruction (fig. 4). 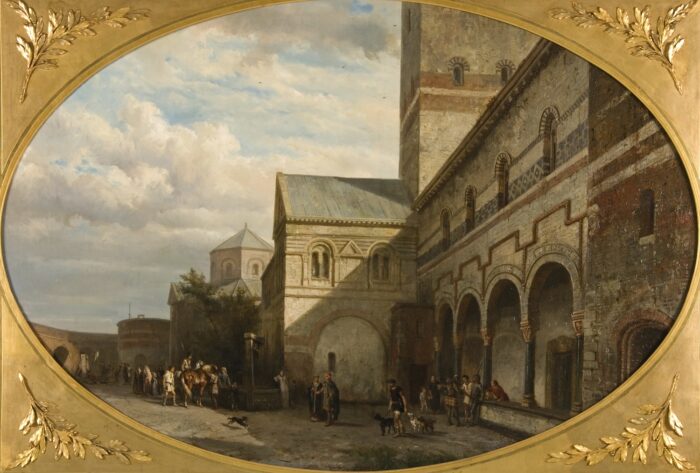 In any reconstruction of the Valkhof citadel, anachronisms such as those in Springer’s painting are probably unavoidable. The paintings, prints and drawings of the citadel were produced from the sixteenth to eighteenth centuries, when the originally Romanesque citadel had already been “embellished” with Gothic lancet windows and step gables. Any reconstruction plan must answer the question: which citadel must be rebuilt? Since there are no surviving architectural plans or foundations, architects’ sole resort is to depictions.

In spite of all such discussions and problems, the Valkhof Society, founded in 1978, put forward a steady stream of reconstruction initiatives over the years (fig. 5). The fact that the park not only enjoys national heritage status but is also registered as a protected archeological site further complicated matters. The Valkhof Society would sometimes gain support from the Municipal Executive, but each plan would eventually run up against the objections of national and municipal heritage bodies.

The most important points of criticism cited possible damage to the Valkhof Park and the lack of data on the original Valkhof Citadel, which made it almost impossible to achieve a reliable reconstruction. The objections of the national heritage agency were highlighted on several occasions by the Ministry of Education, Culture and Science, which refused to issue a license for a project that risked damaging a national protected archeological site. This flat refusal dried up support for the reconstruction plans among local politicians. 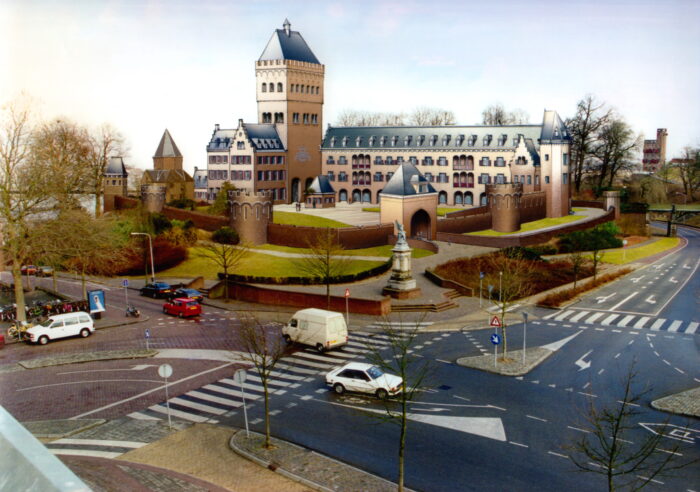 Focus on the Donjon

When Culture Minister Maria van der Hoeven responded that she would not automatically refuse to grant a license for the project, the city council decided to draw up a Plan of Action. A permanent structure, unlike the temporary donjon, might pose a risk to the park. The city council therefore commissioned a study of the park’s history, the possible remains of old foundations, and the donjon’s original appearance.

Research into the citadel’s original appearance revealed that the drawings made by Hoogers provided the most accurate record (fig. 6). His drawings were therefore used not only for the new donjon’s design, but also to determine its precise location, since examinations of the soil proved inconclusive in this regard. Hoogers is one of the three artists who depicted the donjon, the Valkhof chapels, and the adjacent Belvedere at the same time. For the research project, Hoogers’s image was projected onto a specially developed computer model of the surviving structures in their present setting. This comparison revealed that even Hoogers had been swayed by aesthetic considerations and had not sought to achieve complete accuracy. In addition, tests on the soil do not resolve the question of the donjon’s original position. The many images of the Valkhof citadel certainly give us an idea of what the donjon looked like, but do not establish either its precise location or its precise appearance. 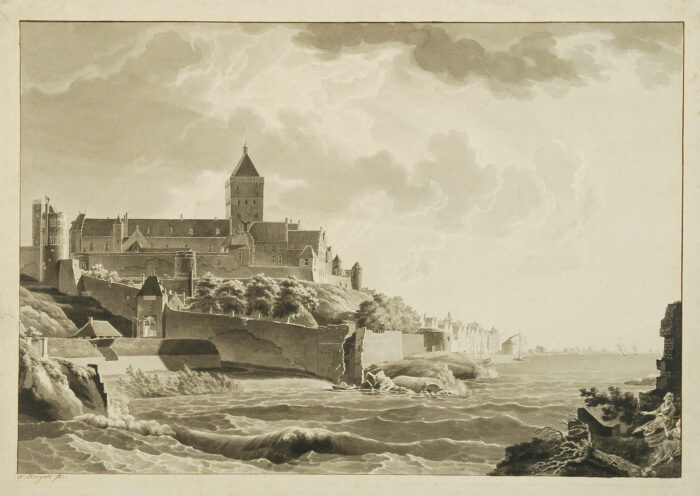 Ten years have passed since the referendum, but still no construction work has started on the Valkhof site. The economic crisis is partly to blame. The city council supports the reconstruction of the donjon, which could be a powerful symbol of Nijmegen’s rich past. However, much remains to be done before the foundations can be laid. In fact, it is an open question whether the reconstruction of the citadel, or part of it, will ever materialize at all. In the meantime, we can gain a good impression of the citadel’s importance by looking at the paintings, prints, and drawings in the collection of Museum Het Valkhof.

Yvette Driever is junior curator at Museum Het Valkhof in Nijmegen. She has been a member of CODART since 2016.

Reconstructieonderzoek Reuzentoren Valkhofburcht, commissioned by the Land Department of the Municipality of Nijmegen, Archeology and Historic Sites Office, Nijmegen 2008.