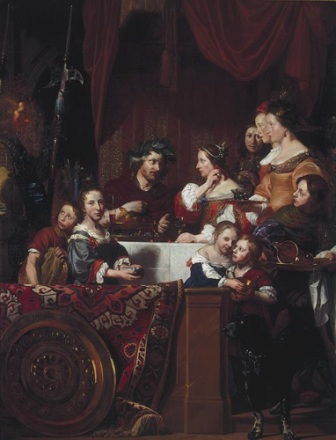 Dr. Kurt Sundstrom, associate curator at the Currier Museum of Art, and Dr. Arthur Wheelock, curator of Northern Baroque paintings at the National Gallery of Art in Washington, DC.

Jan de Bray and the classical tradition was organized by the Currier Museum of Art, Manchester, N.H. and the National Gallery of Art, Washington, DC.

This focus exhibition spotlights works by one of the most important portrait painters in Haarlem in the latter half of the 17th century, Jan de Bray, whose career overlapped that of Frans Hals. De Bray not only painted compelling portraits of his family and friends, but he also depicted Dutch citizens in the guise of antique heroes. This exhibition brings together works of both types and explores the relationship between them. Of particular interest will be the juxtaposition of a double portrait of his parents, Portrait of the artist’s parents, Salomon de Bray and Anna Westerbaen (1664), and The banquet of Anthony and Cleopatra (1669), a large painting in which his parents assume the role of Anthony and Cleopatra.

From the exhibition brochure

Jan de Bray was one of the foremost Dutch artists working in the classical tradition, a style of painting in Holland that fused naturalism with ideals of beauty that originated in antiquity. Although De Bray was also an architect and an inventor, he was primarily a painter of portraits and historical subjects. Often he blended these two genres in what is known as the portrait historié, or historicized portrait. Works of this type portrayed contemporary individuals in the guise of figures from the Bible, mythology, or ancient history and literature, thereby drawing parallels between the virtues of the sitters and those of the historial personages.

The five paintings by De Bray in this small exhibition, all from American collections, demonstrate his remarkable skills in portraiture, with emphasis on the portrait historié. These paintings also reveal much about the artist’s devotion to family members, particularly his parents, whom he celebrated and memorialized in his art.

The museums loaning the paintings that form the core of the exhibition are also the three hosting institutions: Currier Museum of Art (Banquet of Antony and Cleopatra, 1669), National Gallery of Art (Portrait of the artist’s parents, Salomon de Bray and Anna Westerbaen, 1660), and The Speed Museum of Art (Odysseus and Penelope, 1668).Two other Jan de Bray pictures will round out the exhibition: Portrait of a boy holding a basket of fruit, 1658 (Museum of Fine Arts, Boston, MA) and The penitent Magdalena, 1670 (private collection).

The exhibition is made possible through the generous support of Greg and Candy Fazakerley. Additional support was provided by the Samuel H. Kress Foundation.