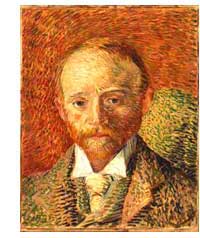 The life story of Vincent van Gogh has become legendary and his work is amongst the formative influences on twentieth-century art. This is the first exhibition on collectors of Van Gogh and consists of paintings and drawings acquired by British collectors in the period before 1939. In focusing on this early enthusiasm for the artist, the exhibition reveals important new research on British interest in the work of Van Gogh.

It is generally assumed that the British were amongst the last to appreciate Van Gogh, but this exhibition reveals the identity of a number of pioneer collectors of the artist’s work. By 1939 around ninety Van Goghs had been acquired by British collectors, many of whom had close links with mainland Europe, where they had access to the artist’s work. Among them were Victor Cazalet, MP; Frank Stoop, stockbroker; Sir Thomas Barlow, businessman; Valerie Alport, artist; Alexander Reid, art dealer; Sir Michael Sadler, educationalist, and Gwendoline Davies, collector.

Research for the exhibition has highlighted some important discoveries; the ‘lost’ Portrait of Alexander Reid (1887), presented by Van Gogh to Reid has been identified as a work now in Oklahoma. It has also emerged that Peach Blossom in the Crau (1889), which had been owned by Belgian artist Anna Boch, the only person to purchase a Van Gogh during the artist’s lifetime, was later sold to Samuel Courtauld. It has transpired that individual paintings had in fact been included in eleven exhibitions in Britain by 1914, although many have remained unrecorded in literature on the artist until now.

Van Gogh and Britain: Pioneer Collectors also features rarely seen archive material relating to the collectors of the artist’s work. This includes catalogues of the earliest exhibitions held in Britain; newspaper reviews of these exhibitions; photographs, and correspondence relating to the works. The exhibition at Compton Verney will be accompanied by a fully illustrated catalogue, with an essay by Martin Bailey.