Last April, Gregor’s Framing visited St. Petersburg for a prestigious assignment. The directorate of the Hermitage had asked the framing company from Spankeren in the Netherlands to provide 18 paintings by Rembrandt and contemporaries with a 17th-century frame. The museum is very happy with the result and Gregor’s Framing can expect more assignments in the future.

The smallest painting that was re-framed measures 8 x 11 cm. and the largest 200 x 250 cm. Whatever the size, a frame can make or break a painting. Gregor’s Framing has now created optimal circumstances to show the paintings in their full glory.

Reframing under Catherine the Great

Catherine the Great had decided to adorn all her paintings with new, gilded frames, according to the fashion of her times. Original Dutch 17th-century frames were lost during that operation. The new, gilded frames did not harmonize with the paintings. The same was true of the Russian black frames that were in use since the beginning of the century.

Gregor’s Framing is one of the few companies worldwide that recreate authentic seventeenth-century frames. In order to to achieve that, the company uses the same raw materials used by  Gregor’s Golden Age colleagues. Based on centuries-old drawings Gregor’s Framing produces exact replicas, that are more precise and specific then that of its competitors.

Before Gregor Simoons and his collaborators traveled to St. Petersburg, they studied the type and style of frame that would fit the paintings extensively. Three days of work in an empty room in the Hermitage resulted in an amazing outcome. Gregor looks back with pride: "The Hermitage now knows that there is a unique framing company in Spankeren. We expect to get more commissions from this leading museum." 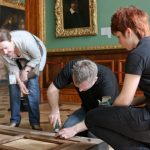