The National Museum in Gdańsk has regained a painting by Melchior d’Hondecoeter, a war loss from the historical Jacob Kabrun’s (1759-1814) collection, which, bequeathed to the city of Gdańsk in 1814, constituted the basis of the Stadtmuseum.

The signed painting Still-life with Dead and Living Birds and Hunting Gear was evacuated, alongside other art works in 1942 by the museum personnel for safekeeping in the vicinity of Gdańsk. The record on the evacuation checklist was the last document of the painting’s existence until 2008, when it was offered for purchase to the National Museum in Gdańsk by a representative of the then owner in Paris.

After negotiations and research undertaken to confirm the painting’s identification and thanks to the generosity of the regional government of Pomerania who financed the acquisition, the painting returned recently to the same museum building it had left in 1942. The final proof of the picture’s identification as the war loss from Kabrun’s collection was found by comparing the current conservators statement with the documentation held in the RKD. Owing to the most kind help of Fred Meijer, who provided the pre-war photograph of the Gdańsk painting (non extant in the Gdańsk archives!) the marks of the original stretcher were detected in the original and present visual material.

The painting also forms a precious stylistic document of Melchior d’Hondecoeter’s oeuvre, as it marks the passage between earlier game-pieces and representations of live birds which the artist painted later. The living birds, and the motif of the wall closing the composition in the middle ground while the distant vista opens on the opposite side, do not appear in proper hunting still-lifes of the “Raphael of bird painters”. Therefore the Gdańsk painting seems to be quite unique in the whole artistic output of this master.

The Still-life with Dead and Living Birds and Hunting Gear will be temporarily placed next to Jan Fyt’s similar painting in the exhibition Van Eyck, Memling, Breughel: masterpieces from the Brukenthal National Museum in Sibiu held presently in the National Museum in Gdańsk and after the reinstallation will adorn the museum’s Gallery of Dutch and Flemish paintings. 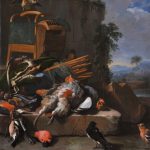 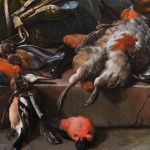 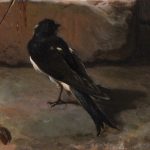 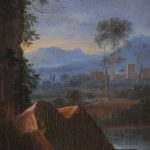