From the museum’s press release, 3 December 2013

Visitors to the Alte Pinakothek will have to face the temporary closure of sections of the popular paintings collection over the next few years. The lighting in the building, designed by Leo von Klenze as a naturally-lit museum, has to be modernised; at the same time the building is to be renovated to meet today’s energy efficiency requirements. Defective windows are also to be renewed. The overall cost will be around 12 million euros. Work will be carried out over a four-year period and divided into different phases so that it will be possible to keep extensive areas of the Alte Pinakothek open at any one time. The first rooms will be cleared in mid February 2014.

The lighting in the Alte Pinakothek has been unsatisfactory for a number of years; the museum’s energy balance – based on today’s criteria – no less so.

At present, even on the brightest of days, artificial lighting has to be turned on in the Alte Pinakothek. In future, a new system of blinds for top-lit rooms will enable the optimum use of daylight. Sensors will ensure that artificial lighting, which can be dimmed to whatever level required, will only be turned on when natural light is no longer sufficient, depending on the time of year or day. Visitors will notice the replacement glazing in the interim ceilings in top-lit rooms which will improve the level of translucency and diffusion of light. During renovation work windows that have been defective for many years will also be restored. In total, more than 1,400 panes have to be renewed.

While these measures will all have a positive effect on the museum’s energy consumption levels, the insulation of the roof and the use of state-of-the-art insulated glazing will also have a decisive impact on energy savings and contribute towards reducing the museum’s ecological footprint.

The renovation of the Alte Pinakothek is closely coupled to the Bavarian state government’s intensive efforts to fulfil energy conservation targets set by the federal government of Germany. At the same time, the artworks will be presented in a better light.

Phases of the renovation and closure of rooms

The scope of the work, partly to be carried out from scaffolding erected in the rooms and staircases, partly from external scaffolding, makes the temporary closure of rooms unavoidable.

The renovation work has been planned in four phases – in each case between spring and autumn. Work will start in 2014 on the first floor in the west rooms between the Rubens Room and the Spanish Room (Rooms VII–XIII), including respective small exhibition rooms. Due to the large number of paintings to be stored and the scope of conservation measures to be carried out to the walls and floors, the rooms effected will already have to be closed successively from mid-February 2014. It is not expected that they will be reopened before the end of the year. Rooms X–XIII, included in the second phase of building work, will also partially be used as a depot and will remain closed after this date.

Renovation work will continue until 2017. The western-most part of the building on Arcisstrasse (first floor and ground floor) as well as the small exhibition rooms on the ground floor in the west wing (Brueghel) and the museum shop will follow in 2015; the upstairs rooms (Rooms I–VI) to the east, including the small exhibition rooms adjoining and the east staircase, in 2016; the final section will be the end of the building to the far east on Barer Strasse (upstairs and ground floor, including the ‘Klenzeportal’ temporary exhibition space) and the café in 2017.

All rooms that are not part of the section being renovated at any time will remain open to the public. The admission price for the permanent collection will be reduced to 4 euros (concessions 2 euros) during renovation work.

A presentation of the museum’s highlights with paintings from the rooms closed is being planned. Temporary exhibitions announced for 2014 will take place without change. 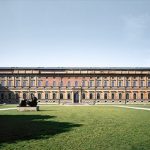