This week the Amsterdam Museum presents an exquisite loan from the National Gallery of Art in Washington. The Portrait of Saskia van Uylenburgh by Rembrandt will be on view in the museum for a period of two years. The portrait has never been shown at a Dutch museum before and will feature in Amsterdam DNA, the museum’s permanent presentation. It will be on view there from 2 August onwards.

In addition to being a superb example of the artist’s genius, this portrait of Saskia van Uylenburgh also tells part of Rembrandt’s own personal story. He probably began painting the portrait in 1634/1635, shortly after he and Saskia were married, and only completed it some years later, around 1640. Following its recent reframing -covering later additions at the left-hand side and bottom- it is now even better possible to enjoy the amazing quality of this intimate portrait. The work was last shown in Europe in 1894, in Paris, and now makes its first appearance in a European museum.

This loan was made possible by the Dutch State: the Department of Cultural Heritage provided an indemnity guarantee on behalf of the Ministry of Education and, Culture and Science (OCW) and the Ministry of Finance. 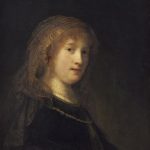